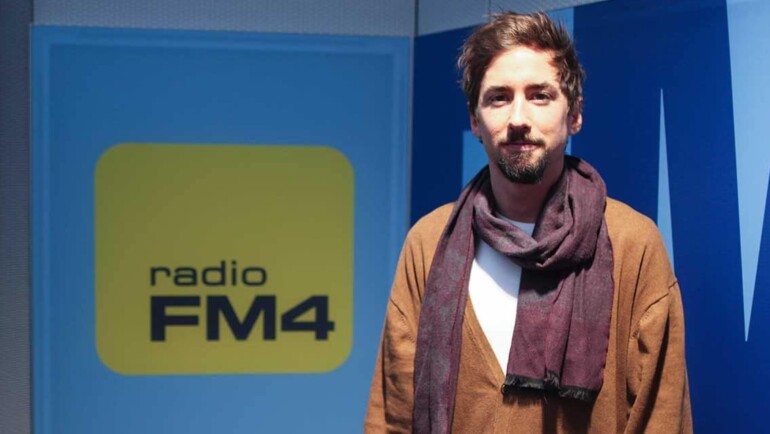 Paul Ruben: With Silence and Gratitude to Electro-pop

Sometimes you have to embrace silence to find your musical self. The producer and musician PAUL RUBEN has fled from the noise of the big city to Burgenland and has written his most pop-sounding electro album to date there. He is the FM4 Soundpark Act of the month December.

Spherical sounds, fat synthesizer bass, melancholic melodies, reduced beats and an intimate voice that takes us into a world of its own. This is the sound of Paul Ruben, a very active producer and musician, who had to walk through many a dark valley to find himself, not only musically.

Where the musical threads come together

Born and raised in Carinthia, Paul Ruben moved to Vienna because of music. There he lived with his brother, who studied at the film academy, in a shared flat.

“The doors to our apartment were always open for our friends. It was a nice time, someone always came to visit. You never were alone. But I didn’t find any peace for the music either. Most of the time I tried to produce tracks in my room during the night. My brother had a completely different rhythm of life and often watched movies at three in the morning. Because I couldn’t sleep, I put on headphones and tried to create my own peace with the music”. – Paul Ruben

He published the pieces that were written at that time under the project name “Damenbart & Zunge”. With the track “Ton 1” it immediately becomes clear that Paul Ruben is actually a pianist. The piece strongly reminds one of the melancholic film music themes of Yann Tiersen. Paul describes himself as a pianist, although he also has his wilder and louder sides. With his brother’s band, which calls itself KARTENHAUSKÖRPER and gets along very well with BUNTSPECHT, he’s on stage during live concerts. The music as well as the tracks of his solo project Paul Ruben are released on Sarah Bart Records, a label Paul founded. So he’s got quite some musical threads coming together.

Losing yourself to find yourself

But only when Paul decides to move to Burgenland after five years in the big city he finally can give free rein to his musical ideas. Paul Ruben’s move to his parents’ large old house was initially a shock. Suddenly he was all by himself. At the beginning he almost lost himself in the rural solitude of the house. When Paul built up his instruments and his recording equipment, peace returned and the longed-for silence helped him to the wonderful soundscapes of his new EP “Halleluyah”.

The almost six-minute opening track “Hell Is Real” is a cleverly arranged, very sensitive electro-pop piece with a psychedelic impact and a dense atmosphere, although it sounds quite reduced at the same time. The sluggish beat and the deep bass lay the foundation for a dreamy track that speaks of a very difficult period in Paul’s life. The likeable and reserved musician doesn’t reveal much about it, but it seems to have been a difficult crossing of a dark valley of his soul that is the topic of this track. After all, according to some people, there is a potential hell within us that we create ourselves.

Just like the heavenly feeling that Paul Ruben describes in the follow-up track “Heaven“. And that is clearly about love. The love for life, after all the song was written when his brother had a child. Paul: “In view of the often apocalyptic world around us, it was a very beautiful moment when my brother and his partner had a child. It was saying yes to life, despite the difficulties we face.”

Speaking of love: The most pop-sounding song and a highlight of the EP, “These Days”, which quickly reminds you of the sound and mood of Tame Impala, is Paul’s very straightforward request to a woman to stay with him despite his “craziness”. For the first time he feels her to be exactly the right person at his side. The musician has translated this positive and joyful feeling through polyphonic chant, tender melodies and a lively rhythm into a melancholic and fragile love song.

“The Need” too, with its soft piano sounds, hypnotic beats and echoed voices is a piece with a clear and positive statement. It’s about the needs we all have. Such as to be loved and esteemed. But it is also about gratitude, for Paul a key to inner peace and freedom. As such, “Halleluyah”, the title of the EP, is also an expression of his joy and gratitude towards life, even if he has had very difficult periods. At the end of the day it is about the inner transformation towards a fulfilled life, as the short, and very reduced song “Eternal” tells us.

Maybe sometimes one has almost to lose oneself in order to find oneself. At least that seems to be the story of the musical project Paul Ruben, from which we hope to hear a lot more.