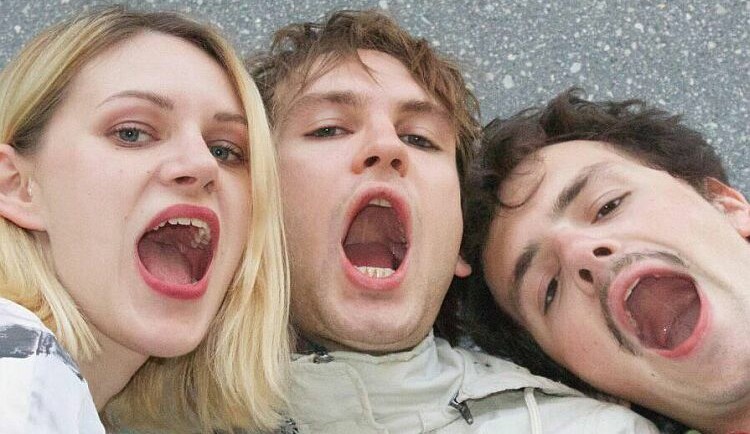 “We want to hear what we don’t understand” – Pauls Jets

Imaginative pop, mysterious rock – about love, loneliness and rebellion for two: Pauls Jets are the FM4 Soundpark Act of the Month. Sometimes you don’t realize something’s missing until it’s finally there. That was the case with the newcomers of the moment, Pauls Jets. The trio revolving around singer Paul Buschnegg combines childlike naive stubbornness with dreamy slacker-inefficiency, fundamentally sensible grunge-ambivalence and romantic punk rebellion. Pauls Jets fly with the lovable daredevilry of a bush-pilot over the niche of intelligent domestic pop poetry, somewhere between Ja, Panik and Nino aus Wien. Their words are clouds, their songs castles in the air; imaginative and delicate, diffuse and intangible, like fog. Their indie pop sounds refreshingly carefree and original. Instead of digging through retro boxes, they open up their own barrels – and the often forgotten lightness of being exudes from them in bright colours. Production experiments, both linguistic and musical.

It all started in 2016 as an experiment by Paul Buschnegg: “I started doing crazy songs on the computer because I was a bit bored and sad that a lot of songs are done very conventionally. Maybe all my songs are boring now anyway. But at least the main idea was to go for it in a freaky way and lot distort something you don’t usually distort and stuff like that. It was a production experiment, also a linguistic production experiment. “ Later Pilot Paul expanded his crew and brought drummer Xavier Plus and bassist Romy Park on board. In June 2018 the three of them released their first single “Üben Üben Üben” on Stefan Redelsteiner’s Lotterlabel, and the discoverer of the band Wanda once again proved that he knows what’s good.

The story behind “Üben Üben Üben”

But the story of the song is of course completely different, as Paul Buschnegg tells us: “I read the words on a piece of paper. On a boring piece of paper with a lot of text on it. And the words ‘Üben Üben Üben’ were already written on with a marker pen at the time I received this note. Instead of reading it through, I went over to the piano – no, I wish – to the keyboard and then started playing. These are all white keys I play! This is really a song to play yourself. It’s a C, a white key. That’s something to know. Then you skip one, then the next white key comes, then you skip one again and then the next white key comes again. It can be that simple! Others say I sang the song weeks before to annoy someone. But I don’t think that’s true at all. It was never meant to upset anyone.“

The second single “Diese Villa ist verlassen” (This villa is abandoned) was released by Pauls Jets in October 2018. According to Buschnegg, it is a “dystopian, post-apocalyptic song” and in the lyrics he takes on the role of a mysterious outsider with lines like “No one here shall ever understand us”. A position that is very important to him, as he says: “If I like songs, then they are most likely from this position. I think a lot of people feel that way. We don’t want to hear what we already understand at all. We want to hear what we don’t understand. I always find it very difficult when people say they don’t understand art. Because it’s not about understanding art per se. That’s mathematics or physics then. It’s nice when one doesn’t understand all of it – and when you hold that up. “

From personal to fantastic

In March 2019 their debut album will be released with the very pragmatic, but not quite true title “Alle Songs Bisher” (All the Songs so Far). The 15 songs are about love, loneliness, superheroes, birthdays, art, and rebellion in twos. Musically they zip from expressive guitar rock to LoFi HipHop and imaginative pop: “In the beginning the songs were more personal and authentic,” says the 22-year-old art student, “and now it’s just switching into a fantasy direction. I find that exciting. There’s so much music already. And I don’t want to do what others have already done. I don’t want to record a worse ‘Digital is Better’. Or something like Isolation Berlin. I don’t see the point in repeating that. So I’m trying to move into other realms. “

By Daniela Derntl – tanslated from the German article (FM4) by Dave Dempsey.