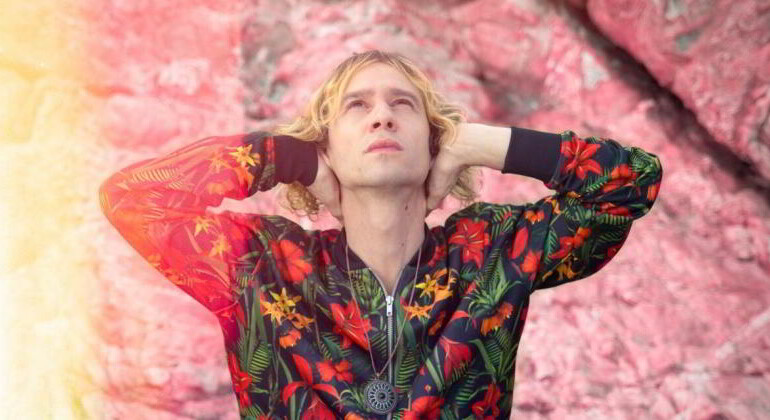 It clicked. Melancholic indie rock has transformed into psychedelic hippie pop with a lot of positive energy. Rene Mühlberger presents his new solo project PRESSYES and is the FM4 Soundpark act of the month May.

Blurred holiday photos, the face barely recognizable. That was how Pressyes presented himself visually to the public. And then the exuberant guesswork began: Who could be the person behind this project? For the first time the voice of Pressyes was heard on the great track “Just Can’t Get Enough” by Gudrun von Laxenburg. A track in which velvety vocals sink into a sea of sound, reverb, and shimmering atmosphere.
Then Pressyes released his first single “On The Run” and it became clear that an extraordinary multi-instrumentalist and talented composer was at work here. The driving percussion, the wonderfully dirty acoustic guitar in the left and the cheeky synthesizer in the right ear immediately evoke associations with the grandiose Beck of the nineties. Even the way the gallantly grooving drums were played and recorded is reminiscent of Beck. “On The Run” is a grand introduction to the new world of Rene Mühlberger.

First came the fall. After the dissolution of Velojet, Rene Mühlberger – singer, songwriter and mastermind of the band – found himself alone in the rehearsal room. While his former band members have partly devoted themselves to family life, Rene has continued to write songs that have all gone more in the direction of indie rock of his former band. Little by little, deeper feelings emerged from this difficult situation and the musician began to deal intensively with his personal development. Regular meditation and reflection helped to flip a switch in his head. Rene: “I used to be very melancholic and often not in a good mood. Sometimes it was all too much. Then, somehow, I managed to reverse my polarity over the last few years. By positive thinking, even if it sounds stupid. This has worked very well! I almost only surrounded myself with positive things and positive music. And that’s why I wanted to write such a positive album.“

And that is what “On The Run” immediately became. Because the music presented to us here in compact songs produced with love and attention to detail is dreamy, ethereal pop interspersed with psychedelic rock of the sixties and seventies, although references to contemporary music have also found their way. A track like the second single “Touch The Sky” with its driving groove, wafting synthie surfaces and galactic guitar melody could also have been written by Tame Impala.

“On The Run” sounds like a concept album. A grand road trip that inevitably takes you to the American west coast with the song “California”. Here Rene uses a whistling melody and smooth fuzz solo guitar to invoke all the clichés that the land of tanned surfer dudes and eternally smiling golden state girls has to offer. The track, with tongue firmly in cheek, represents Rene’s very serious desire to travel to California. A trip in a pimped out DeLorean to take him good fifty, sixty years into the past when Jack Kerouac drove up and down the dusty highways.
The title song “On The Run” also deals with travelling and being constantly on the move. After all, Rene has also already covered many kilometres as live guitarist of Clueso in the last few years. There is also his annual trip to Asia – not least for the inspiration and development of his creative process – a trip usually taken when the grey winter settles over Austria.

That is probably why Pressyes´ debut sounds like a perfect summer album. The sounds of the analog instruments shimmer and flicker like heat-waves on the horizon. The airy yet earthy drum sound gets the heart and feet beating on the open-air evening dance floor and the laid-back “Summertime” immediately transports us to a white sandy beach under the shady palms.

But the down-to-earth attitude of the political piece “Children Of The Sun” proves that Rene Mühlberger isn’t just on the road with his head in the clouds. In this song he calls on the “Children of the Sun” to unite and courageously confront the powers of darkness. A certain coming to terms with the past can also be found on the album. The indie-pop piece “Fountains” and its melancholic mood is a reappraisal of the dark time after the dissolution of Velojet. And at the end of “On The Run” Rene is happy to come home again.

“Well Come Back” is about how different it feels after returning from a long journey. How small or large the city and your own four walls can seem. And that your gaze is curious and open again and that you discover things that were previously hidden from you in your daily routine.

Despite the blond strands of hair and the flowery outfit, Rene hasn’t really become a hippie, even if that’s always fascinated him. Rene: “I have always tried to live this to some extent. But of course I’m not a real hippie just living for the day. I work way too much for that and unfortunately I also like material things like my old synthesizers and guitars. But I like to dream about it and there are times when I drive around in my vintage 60’s VW bus from the sixties and I stop somewhere, sleep a few days in the bus and just do what I want“.

It’s exactly this spirit that the great Pressyes debut conveys with all its positivity, its wonderful dream-pop sound universe, and the immediately unforgettable and sunny songs. The only way to get them out of your head is to meditate.

By Andreas Gstettner-Brugger – translated from the German article (FM4) by David Dempsey.