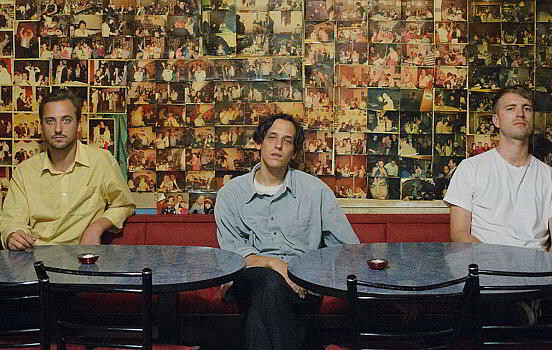 Slackerpop and the eternal adolescence: Sluff release their debut album “On Debris”. They are the FM4 Soundpark Act in September.

It is an old slogan of the avant-garde that renewal requires destruction. The German artist Gerhard Richter often destroyed his paintings, while the British street artist Banksy’s works are frequently by others. As in the fine arts, so it is in music. The old has to make way for the new. Sluff from Vienna have described their struggle for total renewal with their suitably titled debut album “On Debris”.

Anyone who has been out and about in typical scene dives on the Gürtel or in Flex has probably already heard “Sluff” once. Either as word on the street, “the new DIY scene band”, or maybe even live. The trio has already made a small but good name for itself as a guarantor for drunken nights out. It was just such a scene bar in Vienna, “Transporter” (unfortunately the venue doesn’t exist anymore), where the band Sluff got their start: Martin Zenker, singer and guitarist, had a long bar conversation with Paul Stöttinger, drummer, which eventually ended in the rehearsal room.
When Moriz Büsing knocked on Martin’s door one day, about four years ago – he was actually just looking for a place to spend the night – it all became clear. He had a bass with him and happily accepted Zenker’s roommate clause: “You bring an instrument, you’re in the band.

2016 saw the release of Sluff’s first EP. It was called, appropriately enough, “Constructions”: life plans, eternal self-optimization, the thinking of great dreams which one might never reach. Titles such as “Talk Down” or “Streaks” oscillate between exaggerated self-assessment and despair. It’s not only a matter of content, it’s also a musical way of finding oneself. The EP sounds raw; the arrangements as if they were first built up, and then deconstructed but by bit it doesn’t have much to do with pop in the sense of straightforward melodic guidance. It is a scratching, scraping, disassemblage. It is a multi-faceted adventure, on which Martin Zenker also repeatedly puts his voice in different positions. Multifaceted also in the sense of exploring the possibilities you can get out of drums, guitar and bass. That’s probably why the EP is so amazing

This pop moment, at the beginning rather reviled, returns twice on “On Debris”. Wolfgang Möstl has once again put himself behind the scenes as a producer. Sluff also got to know him at the Flex while working there together. The man, who somehow has his fingers in the game everywhere where good guitar music is concerned in Austria, puts his skills to use once again. As with his own music projects (Mile Me Deaf, Sex Jams, Melt Downer) he proves once more that the line between experimental noise and thickly applied pop melody can be very narrow.

Of course it’s not only Wolfgang Möstl who deserves credit for how well “On Debris” sounds now. Martin Zenker proves his knack for direct, almost romantic melodies with the first, maybe the best single “Deep Blue”. The guitars swerve along into a density that quickly engulfs you. Like Jonas in the belly of the whale. Thickly applied water metaphors are used to create exactly this feeling: “Floating through the deep blue, waves keep shaking up” it says in the first line; and indeed, we dive into it. The symbiosis of text and music is rarely better, all senses are addressed, even if you’re actually just listening.
The album sounds softer, rounder than the EP, this may be partly due to the production, but partly to the time. Sluff may have made their fans from the Viennese underground wait for this big production. But once in the studio, everything was recorded in a few days. While the EP was still about experimenting and above all discovering their limits, “On Debris” sounds like pure essence. The result of asking yourself what you really want. Slacker guitar songs which can make a claim to pop with an instrumentation that keeps the final result from being all too smooth.

Well told doesn’t hurt so much

Sluff not only wrote the first (“Deep Blue”), but all twelve songs with a strong musical and lyrical context. At the same time, however, the lightness of the melodies balances the melancholy of the content. Winking, smiling and soothing harmonies confront the everyday madness, the defined constructs that nobody can escape. You can feel that in this album you are, just like the band, in the process of self-discovery. There are more questions than answers: Where do I want to go, what is the goal? And what happens if I miss the best? “I can not resist, a chance that could be missed, a chance that will destroy the feeling of the void” is a line from the relatively quiet song “Forgotten”.

At the end a special hint. The second single of the album, called “Vile”. It bundles so beautifully the good restlessness, the evil calmness. There, at the end, everything is good. And if not, well, then it will go on anyway: “When this is wrong / still rely on gold”.