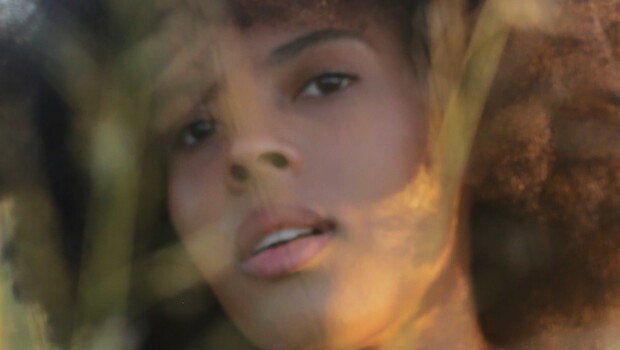 The local RnB newcomer Adaolisa has won us over since her first releases and exclusive sessions, with fantastic tracks and a stellar voice. The singer, who decidedly refuses playing in front of an audience, is our FM4 Soundpark Act of the Month.

On May 1st, the FM4 charts had a new number 1. A fantastically produced and sung RnB track called “Fineboy” by Adaolisa. A song that would fit seamlessly on playlists between, before or after artists like H.E.R., SZA, Estelle or Doja Cat – and hopefully will soon, because Adaolisa sound is on par with the big, international RnB world; and is thereby quite self-confident and, of course, made in Austria.

The daughter of an Austrian and a Nigerian grew up in Johannesburg, lived in Salzburg for a few years before finally moving to Vienna to work on her music and study art. She was raised musically by her father’s records and especially by dancing and singing along to pieces by Fela Kuti, Michael Jackson and Luther Vandross, as she tells us in the interview. She then found her own sound when she discovered her love for RnB of the late 90’s and 2000’s together with her school friend, Johannes Madl a.k.a. MadL, and took her first steps as a singer.

Powerful songs should be built firmly on the foundations of classic RnB, without shying away from big pop; but still with enough restraint, without wanting too much at once. Stylish.

The first time Dalia Ahmed brought the wonderful Adaolisa to our attention: In her Late Night Lemonade she presented three live tracks – besides two of her own songs, also a cover version of her absolute favorite song “American Boy” by Estelle feat. Kanye West. Again, Adaolisa proves her skills.

In December 2020, the young musician was a guest at Studio 2 in Vienna’s Argentinian Street to record an FM4 Acoustic Session for us; a concert together with her producer Johannes Madl on the piano. In the interview she told us that this way of performing is actually her favorite. It’s a kind of safe space, where you can try things out and repeat them if necessary. And for her, even more important: the concert takes place without an audience. Because performing in front of an audience is absolutely unimaginable for her. Even as a small child, she hated school performances, never felt comfortable on stage, and even choir performances were always uncomfortable for her. She therefore rules out future appearances in front of an audience.

A star without an audience?

But how does that work? An RnB star without an audience? The young singer describes herself as a recording artist. Alone with the microphone, that’s the place where she feels comfortable and can freely develop her skills. In the studio she is at home. And Adaolisa has found this new home here in Vienna at Villa Lala. Not far from the Schönbrunn Zoo, in a former embassy villa in Vienna’s Hietzing district, a large number of creative people have come together around singer Julian Heidrich, alias Julian Le Play, and producer Filous to join forces in the international music production world.

Among them are MadL and Adaolisa, who not only write and produce songs for other musicians here, but can also work on their own pieces – they find the ideal conditions there. No comparison to their first steps together, where Adaolisa sang the vocals in Johannes’ home studio. Home office works like that, too.

The impact of the Villa Lala environment on Adaolisa’s work will be shown by her new EP, which is scheduled for release in the fall. Over the summer, individual pieces from it will be released immediately. Therefore, in the Soundpark show on July 1  with Lisa Schneider, a world premiere occurred, presenting the song “Could be Sweet” exclusively. Who knows how long it will take until it reaches number 1 in the FM4 charts?

Translated by Arianna Fleur from the German original published on July 1st, 2021