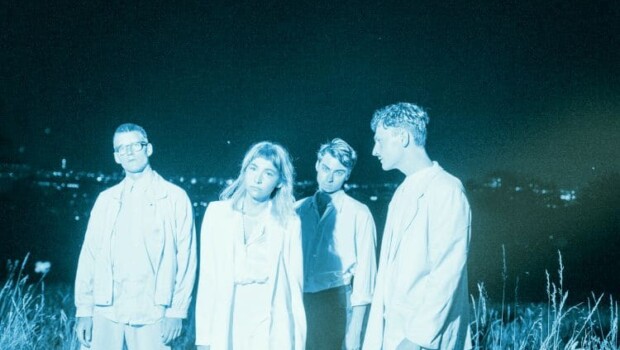 Fortunately, the budget was doubled this year, an important sign that support for internationalization efforts by local musicians is the focus of funding agencies – especially in these most challenging times. In 2020, in the second round with 5K HD, CRUSH, CULK, KOENIG, OSKA, and the SCHALLFELD ENSEMBLE , a total of six emerging acts will receive funding.

Which bands don’t dream of a great international career? Though many acts have the potential to take off abroad, it’s often a tremendous financial challenge for them to even accept invitations to international gigs. Especially at the beginning of a career, the fee offered is often just enough to cover the musician’s travel expenses. Even appearances at well-known festivals are sometimes difficult to manage. Resultantly, numerous acts accept foreign tours into which they ultimately invest more than they can actually earn. To counteract this situation, funding activities of the Federal Ministry for Arts, Culture, Civil Service and Sport (BMKOES) are being intensified within the framework of FOCUS ACTS. The declared aim is to further increase the visibility of Austrian musicians abroad and to give even more aspiring musicians a starting shot for an international career.

“We are experiencing a very difficult time – especially for the music industry. It was therefore important to us to provide additional support to local musicians by doubling the funding. The restart after Corona will require international visibility. FOCUS ACTS should serve as a valuable lever, ”says State Secretary for Art and Culture Andrea Mayer.

During the course of an invitation to tender – within whose criteria the extenuating circumstances of a pandemic were taken into account as well as possible – artists already on the threshold of international careers were identified for the FOCUS ACTS CALL 2 2020. With 5K HD, Culk, Crush, OSKA Schallfeld Ensemble and Lukas Koenig, a total of six acts were awarded funding amounts of EUR 5,000 each. Particularly pleasing to see is the diversity of the supported acts, ensembles and musicians, ranging as they do from jazz to pop, rock and electronics to new music.

Last year, Culk created an “addictive sound” (Der Spiegel) with their self-titled debut album, causing a sensation within the indie rock scene. They’re located somewhere between shoegaze and wicked post-punk and carried by a voice whose intonation resonates with velvety seduction. The Viennese band is always close to the abyss. Singer Sophie Löw presents herself as a broken femme fatale, sings of love and powerlessness and goes deep into the depths, i.e. to where it hurts. Culk live from the dance of opposites: the dispassionate voice is absorbed by clamouring guitars and angry drums. Here the yearning is detached, the aimlessness vehement. The lyrics are explicit yet enigmatic, cool, but at the same time intimate.

Crush, as someone once praised, “set to music precisely the promise of their perfectly ambiguous band name: Crush in the sense of having a crush, Crush in the sense of the sugary soda spraying out of the can, and Crush in the sense of crushing the discontent that holds us all back under the sheer positivism of pop.” As demonstrated on their 2020-released and once again very successful mini-album “Sundown”, the five-piece band from Graz are celebrating their very own sound. It’s one in which post-punk, shoegaze and quite modern dream pop harmonize alongside each other, grippingly expressing themselves in songs between that sit between calm and storm.

Sometimes it can happen very quickly. Maria Burger, aka OSKA, was able to win over international critics with her debut single “Distant Universe“. A reaction that was repeated with her following singles too. The pop of the singer-songwriter from Lower Austria, who was awarded the coveted XA-Music Export Award this year, is something special, with a refined sound and a charm all its own. It’s above all the artist’s reserved, intimate and slightly melancholy approach that makes the difference and turns her songs into a captivating, profound listening experience.

The Schallfeld Ensemble inspires with sheer virtuosity and sensitivity to sound, paying special attention to concert formats dealing creatively with respective spatial conditions and opening up a new dimension of listening. Their artistic programming reflects the diversity and interests of its members. The ensemble attracts attention through its exciting programme curation with a focus on young composers, its innovative concert productions, and its work with live electronics and collective improvisations.

Lukas König can confidently be described as one of the leading musical free spirits of the Austrian music scene. As proof, one can cite his prolific number of projects (including Kompost 3, 5K HD, koenigleopold), all of which have one thing in common: they can’t be put into any single musical genre. The musician, who comes from Lower Austria, loves experimenting and is unafraid to go down the unusual path. His solo project Kœnig leads him down such an unusual path. Trained in jazz, König basically leaves it behind and focuses on rap, choirs, synthesizers and those somewhat different sounds, such as his current release “Messing“, on which the idiosyncratic musician deals almost exclusively with sounds from metallic cymbals.

Translated from the German Original by Tristan Bath.