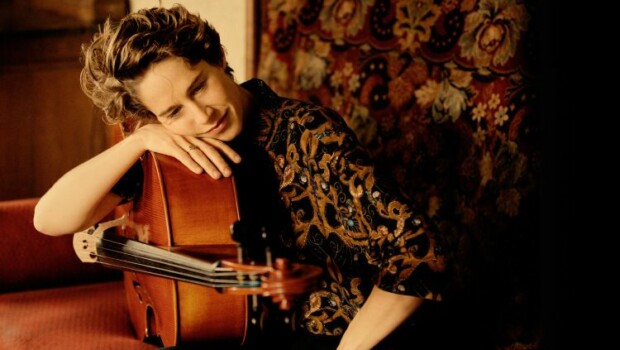 Musical limitations are foreign to the cellist SOPHIE ABRAHAM. A glance at the numerous fields of activity of the 1986 born musician reveals this: RADIO.STRING.QUARTET, TRIO FRÜHSTÜCK, ENSEMBLE SCURDIA and THE LITTLE BAND FROM GINGERLAND are only a few projects that make SOPHIE ABRAHAM’s musical boundlessness visible. With “Brothers” (cracked anegg) the artist has now released her solo debut. And “solo” in her case really means solo, because from composing to recording, almost everything really remained in the hands of the cellist. In an interview with Michael Ternai, SOPHIE ABRAHAM talked about why she finally decided to make a solo album, as well as about celebrating life by dealing with death and how to master the challenging balancing act between being a mother and being an artist.

You have always been involved in many projects. You’ve played with The Little Band from Gingerland, you’re active with Trio Frühstück, and you’re also on the road a lot with the radio.string.quartet. So why a solo album right now? Has the urge to do that become so great?

Sophie Abraham: Yes, absolutely. I’ve had a solo program in mind for fifteen years, if I’m honest. For me, the urge to realize such a program is a bit like the question of whether or not you want to have children, because to bring something as special as a solo program into the world is something very significant. And on this album everything is really solo. I composed all the pieces myself, recorded them myself and, with two small exceptions, only I can be heard on the album. One reason why I waited so long with a solo program, despite the inner urge, was surely that I didn’t really dare for a long time. It took a longer process to develop the courage to really tackle the project. Looking back, however, I can say that it was really nice and very good for me that it turned out that way.

You chose a very personal theme for your album. It’s about death, especially that of your two brothers who died in an avalanche in 1993.

Sophie Abraham: I chose this theme because it has a lot to do with me, my family, generally with my whole life. But I wouldn’t say that the theme of the album is death. I don’t feel that way at all. I would rather say that because I’ve come so close to death, I value life in a very different way and just want to celebrate it. Even when people are gone, they have lived very intensely and beautifully. That’s something very precious to remember. When you lose loved ones, of course it’s hard not to fall into a constant mourning. And I didn’t want to do that on the album. For me, it’s about simply bringing back the beautiful memories. In this regard, the setting in which the album was created was also a very fitting one. Recording the music alone at home without any pressure and having all the time to experience it and reinvent it again at the moment of recording, that was something I enjoyed very much.

You actually recorded the album at your home?

Sophie Abraham: Yes. In the living room. It just offered itself. I was already pregnant at the time and my other daughter was in kindergarten until the afternoon. It opened up a lot of time for me. I had our living room measured by an audio engineer. Then Thomas Schröttner, who then mixed the album, set everything up, positioned each microphone very precisely to the centimeter and made some test recordings. Then I got started.

What’s special about “Brothers” is that it not only approaches the subject in a melancholic and dark way, but also allows for a hopeful note. How challenging was this balancing act between the moods for you?

Sophie Abraham: I didn’t really try to do that at all. It just came out that way. Of course, the melancholy forms a large part, but at the same time I wanted to express a really intimate joy of life with the music. The music should also speak for how important it is to experience beautiful things and to go on adventures together.

What I also really like about the album is that, on the one hand, you can hear that you’ve tweaked the pieces a lot, but on the other, you’ve turned it all into a musical language that really flows. How much perfectionism are you driven by when you sit down and work on a piece?

Sophie Abraham: I’m convinced that I’m not a perfectionist at all. I sometimes see colleagues who act much more perfectionistic than I do. And sometimes I also think to myself that a little perfectionism here and there wouldn’t be such a bad thing. However, when I really get down to work, I usually know exactly what I want and don’t stop until I’ve reached a certain point. With the album, however, it was also the case that I sometimes wanted something different here and there during the recording – for example in the intonation or during editing – but my mixer Thomas Schröttner kept saying: “I’m not changing that now, because that’s you and that’s real”. Then I said, “Okay, it fits. Then it’s just not perfect. I understand.”

As a musician, you have performed in a wide variety of genres. In classical music, jazz, chamber music, even in pop. How much of your various projects has flowed musically into your own?

Sophie Abraham: I would even say that this album is a lot more pop than what I usually do. And I think that’s nice, too. One influence that I have consciously allowed is that from the folk direction. I have always made folk music, even during my studies in Graz. Through a contemporary folk workshop in Lunz am See and my collaborations with Julia Lacherstorfer, ALMA and Harald Haugard, I was finally reminded again of the beauty of folk. Therefore, in some pieces, such as the piece “Mariazeller Weg”, strong folk elements come through. Of course, due to my musical training, classical music always resonates in my music, but I don’t think to the extent that I am immediately recognizable as a classical musician. In classical music you learn to play the instrument very well. I also think that there is certainly some of the radio.string.quartet in my music, especially with regard to the sound language, which is very clear with the radio.string.quartet. You can just lose yourself in their moods very beautifully.

How much did the album benefit from the fact that the corona pandemic limited your live activities?

Sophie Abraham: I had the plan that I would release the album in 2021 even before the corona crisis. In other words, the crisis was not the reason for this album. In fact, corona gave me the time to really work on other things, like editing. On the other hand, corona wasn’t always conducive to creativity with all the lockdowns and the musical standstill that came with it. You didn’t know what was coming and what was really going on. I, and many of my colleagues with whom I talked, felt that the situation was like a brake. The situation was not an easy one.
I think I also experienced corona differently, and more intensely, because at the beginning of the first lockdown, my mother died. And in a way I was also happy about this standstill, because I found the time to really mourn. A little later I got pregnant, which made me focus on my inner self again. So many things happened to me during this time that made me perceive the situation differently.

You are a mother of two. To what extent can this role actually be combined with concert tours? I assume that you also want to present the album live, right?

Sophie Abraham: I made a very clear decision that I also want to play as a mother of small children. And I’m fully behind that, because I just love doing it. At the same time, however, I have to admit that it’s very exhausting because – and I have to get political here for a moment – in Vienna, for example, daycare providers are so well supported that you can theoretically give your child to a daycare provider at an early age without having a guilty conscience. And this is within an affordable framework. Here in Lower Austria, where I live, childcare is not subsidized until the child is two and a half years old, and without exaggerating, you pay about ten times as much. This means that you pay everything in full or it doesn’t work. I now do it in such a way that I have hired a fixed babysitter for the concerts, which at least makes it a little easier. As for practicing and working on the computer, that happens with the kids next to it. I have now set up my technology here in the living room, which is quite an arsenal, and between all the cables, lies the Lego. That’s relatively exhausting, of course.

I could easily have decided to stay at home for a year. That’s also very possible in Austria. However, for a musician that means taking a break for a whole year. And so, as a freelance musician, you get out of the picture pretty quickly. And I simply don’t want that.

Translated from the German original version by Arianna Fleur.