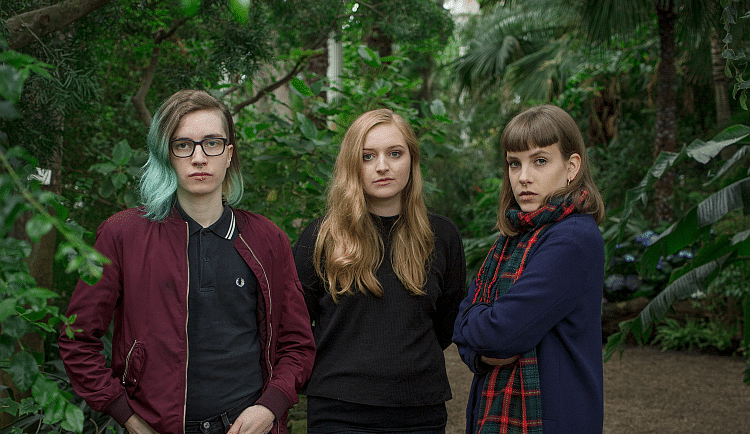 Grunge might be gone but AIVERY have taken the sound and added their own unique twist. AIVERY are a trio consisting of the singer and guitarist JASMIN MARIA RILKE, drummer DORIS ZIMMERMANN and bassist and singer FRANZISKA SCHATZ, who joined the band a little later. On their full-length debut “Because” (Siluh Records) they have proven to be a band that can create their own exciting sound outside of the pop-music norm. Michael Ternai talked to the band about their musical ideas, the development of their own style and the way their songs are created.

At the beginning of September you released your full-length debut album “Because”. Musically, you follow a path somewhere between grunge, noise and punk. The beauty is that you don’t sound oldschool or nostalgic and you really bring your own authentic style to the story. How would you describe your own music?

Aivery: Complex and sophisticated. A little dark. All three of us have different tastes and we frequently have to negotiate in which direction certain parts of a song needs to be changed. In the end, you can hear that too. Musically, we don’t orientate ourselves to anyone else. We don’t want to sound like something that’s 20 years old. We just do what we find exciting. But that doesn’t mean that we want to reinvent the wheel. We just do our own thing.

The band was founded in the early 2010s. Did you know from the beginning where to go musically? Or did you have to find your sound first?

Aivery: For us it was absolutely clear what we didn’t want to do. Instrumentally you could say it was clear that we have taken up a position that is clearly against commercial pop. But you could still argue about the vocals. Franziska, who also sings, has always listened to a lot of pop. Even the embarrassing contemporary stuff, simply because she likes to listen to everything. And you can probably hear that already. At the beginning she was a bit uncomfortable because she didn’t really know how to behave in a “hard” band. This was noticed and people mentioned it to her again and again, mostly by guys. It took her a little bit to get into that role. Now she doesn’t care about that at all. In the meantime, it is also a distinguishing feature of our band that the vocals are so different from what you would expect when you listen to the intros of the songs.

Where do you draw your inspiration from?

Aivery: Inspiration is kind of a difficult word. You might say that what we create in the form of songs is simply the music we would all like to hear ourselves. Our numbers just happen.

Has the love for the grunge sound of the early 1990s always been there?

Aivery: Yes, absolutely. We also talk to each other a lot about this sound. Franziska was the youngest of us and came to grunge a little later. The rest of the band exposed her to a lot of this stuff. In the end, it’s just a sound we have always liked.

“THE PROCESS OF CREATION HAS BEEN A BIT TEDIOUS FOR US”

How and how quickly do you create the songs? How long have you been working on your debut?

Aivery: Long. Some of the songs had been finished for quite some time, but there were also a few that were not finished until the week we recorded them. For the album we reworked everything. The development process has been a bit tedious for us. But that’s a good thing. Two of us, Jasmin and Franziska, are big fans of complex structures. And getting such things done really well takes a certain amount of time.

Something that is audible and almost palpable on “Because” is a certain rebellious and non-conformist attitude towards the mainstream. It seems as if, without looking left or right in any way, you are doing your own thing and you don’t really care what others say. Is that true?

Aivery: I’m glad that comes across. We certainly don’t want to seem completely naive, as many people do. We actually want to avoid a “staged” image, which is practiced by many in the social media, completely. The music is the most important thing for us.

What topics do you choose for your lyrics? What’s on your mind?

Aivery: The lyrics are actually written by the three of us, although Franziska wrote most of the lyrics on the album. It is important to her that she’s not just writing about other people. She is very introspective. In her lyrics, she writes a lot about fear and a little bit about loss of reality. Things she tries to process with the texts.

Do politics play a role?

In September the debut was followed by an extensive tour through Germany and Austria. That sounds very nice. Setting up a tour is probably not an easy task, is it?

Aivery: Honestly, it’s really hard work for such a small band. Nobody’s helping you. And if you were to ask people why they don’t support you, a lot of people would probably tell you to just stop, because it doesn’t work and there are so many bands out there anyway. But you do it simply because at least one person is so stupid and wants to do it.