The excellent trumpet player and composer feels most at home at the interfaces between the music genres, no matter whether in jazz, improvisation and electronic music, contemporary music, avant-garde or world music. Hautzinger tries to build bridges, diminish stylistic limitations, in order to create something completely new and extraordinary. Because of these unique capabilities, it is not really surprising that he is also internationally one of the most sought after musicians in his field.

Born in 1963 in Burgenland, Franz Hautzinger studied  trumpet and composition at the Academy of Music and Dramatic Arts in Graz and at the Vienna Conservatory. Just as the trumpeter was preparing to pursue a musical career, a lip paralysis forced him to a long absence. “I was not able to play a single note for ten years, which I was very sorry about, because I loved the trumpet and still do,” said Hautzinger in a mica-interview.

A stroke of fate that in retrospect, however, took a positive turn. Instead of burying his head in the sand, the musician kept going. He used the time to intensively deal with his instrument and to develop his own style that allowed him to be musically active again. Moreover, the way he played his instrument was simply unique in jazz music. No one was able to produce similar strange sounds from the trumpet like Franz Hautzinger. 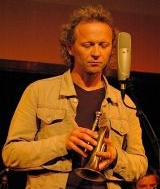 “I was the only one who could play this kind of music, which means I could go anywhere, there was never any friction.” An advantage which he still uses for himself up to this day. 1986 he moved to Vienna and quickly found access to the local jazz scene. He met, among others, Christoph Cech and Christian Mühlbacher and played in the big band “Nouvelle Cuisine” and in the octet “Striped Roses”. This was followed by the CD “Zong of se Boboolink”, also recorded with Helge Hinteregger and for the first time allowed a glimpse of Franz Hautzinger’s musical visions.

Instructive for the trumpeter was a several month stay in London in 1995, where he was able to establish contacts with the likes of Kenny Wheeler, Henry Lowther, John Russell and Steve Noble.

Since 1989, the musician is a lecturer for ensemble conducting, composition and arrangement at the University of Music and Dramatic Arts in Vienna and has reached the top of the international improvisation scene with his sensational solo trumpet CD “Gomberg” in 2000. The release caused quite a stir, because the trumpeter created a tonal language which had never been heard before, and in which conventional musical concepts no longer apply.

To this day, experts of the music scene have notified this record as one of the most important and most influential of European improvised music in recent years. Numerous concerts at home and abroad followed, as well as various collaborations and recordings with internationally renowned artists such as Elliott Sharp, Gil Evans, Sainkho Namtchylak, John Cale, Christian Fennesz, Otomo Yoshihide, Butch Morris, Phil Niblock, Klaus Öhring , Lou Reed, Derek Bailey, the Temptations. John Tilbury, Tony Oxley and Joachim Kühn.

Up to now, nothing has changed Franz Hautzinger’s attitude. No matter whether as a solo artist or as a member of various formations, Hautzinger presents himself as a musician who is always one step ahead in time. His love for experimentation and his curiosity inspire the trumpeter and uplift him to unexpected creative excellence. With his ability to always reinvent his trumpet techniques, we may assume that this extraordinary musician is far from the end of this story.