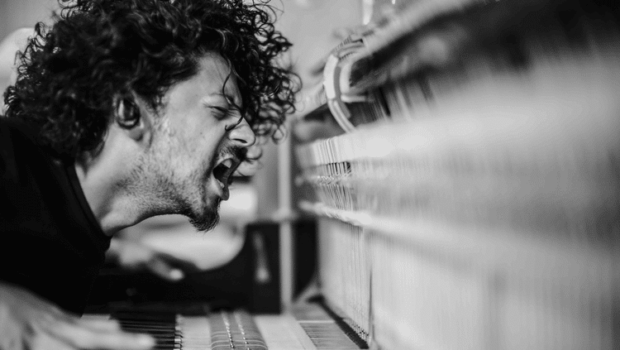 What would the musical life in Austria be without its “foreigners”! It is interesting to observe the continued strong influx of foreign students, graduates and composers that came to Austria for other reasons, who are all an indispensable part of our musical life. Among them is the Mexican composer Arturo Fuentes, who has been living and working in Tyrol since 2004.

Born in 1975 in Mexico City, he received his education in his hometown from Antonieta Lozano and Juan Trigos, who encouraged him to make the leap across the Atlantic. Wandering through Europe since 1997, he studied in Milan with Franco Donatoni, completed a composition doctorate in Paris with Horacio Vaggione, and in that time was significantly inspired by Tristan Murail and Brian Ferneyhough at the IRCAM (Institut de Recherche et Coordination Acoustique/Musique). With his own projects at this institute, at the Freiburg Experimental Studio, at the Center for Art and Media in Karlsruhe and at the ISCT Zurich, he developed a clear electro-acoustic focus in his work, though instrumental music also plays an equally important role. In addition to the computer, the relationships between compositional processes and philosophical approaches have influenced Fuentes from the very beginning.

“A composer has to have a certain kind of lightness”

The reason why he ultimately settled down in Innsbruck, Tyrol, resulted from the simple fact that he met his future wife, the Tyrolean Festival Director Hannah Crepaz, in Paris. Mexico and Austria are only two vertexes of his life, while he continues to extensively visit recent and new work places. In 2007 Fuentes stated in an interview with Judith Unterpertinger: “Today a composer has to have a certain kind of lightness, with a special dynamism, finesse and precision, that allows the composer to see other possibilities beyond his residency. I think the technological development is partially responsible for this incredible mobility, which brings many positive effects of exchange with other forms of compositional thinking. The boundaries have been eliminated by information technology, not just the physical boundaries, but also those that are encountered during sound production: Today we can mix different layers of sound on the computer. With the microstructure as its foundation, the overall sound contains a diverse unity.” (Interview in the German publication: Verdrängter Humanismus – Verzögerte Aufklärung. 6th Edition. Philosophy in Austria 1951–2000, facultas.wuv, Vienna 2010)

Even though Austria does not have a leading role in the international field of electro-acoustic and computer music, Fuentes has found this place to be a suitable interface for his musical interests. His approaches are quite ambitious and congenially animated, as he explains further in the above mentioned interview: “In Austria I have come across all of these qualities: generation and interaction, as well as projection of new artistic forms. In my opinion, Austria should see itself as a laboratory for experiments that will gradually spread to the other European countries. Furthermore, one should dynamize the country’s institutions and universities to foster more diversity and thereby gradually strengthen more and more project developments.”

In Fuentes’ instrumental music, musical concepts naturally play a role that are just as present in the work on the computer. It is important for him to have a very detailed, but at the same time very clear and unambiguous notation for the performer. Both in electronic and instrumental music, the “morphology of sound” is a centrally challenging point on the microstructural level. The musical claim to link dense complexitiy with a certain “lightness” is certified by Fuentes with references to the literary proposal of Italo Calvino: ease, speed, visibility and complexity, which form the counterweight to technology and the artistic aspect. Fuentes see his music as “meticulously arranged, kaleidoscopic chaos that tests the limits of dynamics, timbre, texture and virtuosity. This music reveals a constantly changing sculptural pattern. The listener perceives an acoustic space filled with constant excitation, the search for an ethereal tonality.” – The center is “a composition with a dramaturgical logic; a veritable directive that guides the listener through a new sound world. Texture, timbre and labyrinth are abstract and shaping elements that help the listener to comprehend the music.”

External recognitions for Fuentes’ oeuvre include the first prize of the electro-acoustic Composition Competition Música Viva (Portugal), the Suvini Zerboni Prize and the prize of the festival Lagonegro. He was also nominated for the Staubach Prize at the International Music Institute Darmstadt (Germany), the European Competition for Live Electronic Music Projects (Gaudeamus, The Netherlands) and the Prix Ars Electronica Linz. In 2012 he received the Austrian state scholarship for composition. In the same year, the Austrian ensemble PHACE appointed him as Composer in Residence. A major aspect of his work are new forms of music theater projects that combine dance, video and electronic music, for example, “Line of oblivion” (2010), a work produced by the Belgian Company Joji Inc., or “Grace Note” (Wien Modern/Tanzquartier 2012 ), a joint project with Chris Haring’s Liquid Loft Company.

A look at Arturo Fuentes’ event calendar shows his diverse activities in various countries. Besides portrait concerts in Germany, Austria and France, his schedule includes CD recordings for the label NEOS and a DVD of the dance company Liquid Loft. To describe his “Gedächtniskristallen” for countertenor and chamber orchestra Fuentes writes: “Since my childhood I have been reading [Jorge Luis] Borges. Gedächtniskristalle (in English: memory crystals) is the first piece in which I use one of his texts. Remembering, forgetting, labyrinths, eternity, time and space are topics of Borges. In a certain sense, I have unconsciously integrated some of these concepts in my music. When I was reading the German translation of Everness Ias, I came across the word ‘Gedächtniskristall’, which had a special impact on me: The memory is so fragile that it breaks and echoes like glass. I found a connection between the abstracts of concept and sound. The music of this composition is like a labyrinth and is also fragile like glass, it shatters into a thousand pieces, just like our memory.”