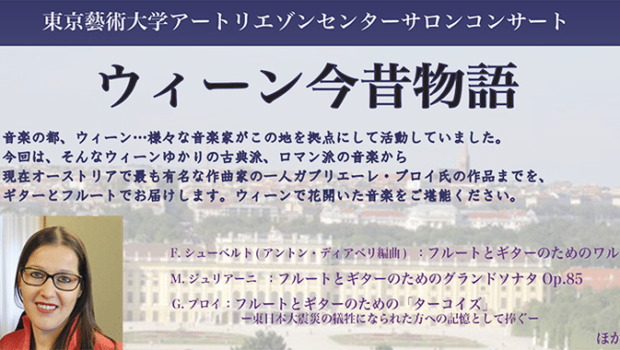 After two composition commissions in the EU-Japan-Year 2005 and the Austria-Japan-Year 2009, as well as serving as the European representative at the Conference Committee of the International Conference in Hirosaki in 2006, this year marks Gabriele Proy’s 4th concert tour in Japan.

Gabriele Proy is a leading Austrian composer and pioneer in the field of soundscape composition. She holds Master’s Degrees in Composition (composition and electro-acoustic composition) and Music Pedagogy (guitar) with distinction from the University of Music and Performing Arts Vienna. She is active giving lectures and concerts at universities and public forums in Europe, Australia, Japan and Canada; from 2001 until 2013 she was President of the European Forum Klanglandschaft.

Honored in 2014 as the composer in residence of the Vienna Concert-Verein, the chamber orchestra of the Vienna Symphony, her orchestral works were premiered under the conductor Philippe Entremont in the USA and under Philippe Morard at the prestigious Vienna Musikverein. In 2015, the Konzerthaus Berlin devoted a portrait concert to Gabriele Proy, and her music was performed by the Vienna Symphony Orchestra at the Bregenz Festival in 2015.

After successful tours to Japan in the years 2005, 2006 and 2009, Gabriele Proy’s compositions will once again be performed in Japan in December 2015.  In 2016 further orchestral performances will follow, including performances with the Vienna Concert-Verein under Alexei Kornienko at the Wörthersee Classics Festival and at Vienna’s Musikverein. The world premiere of her work commissioned for the Chamber Music Festival Schloss Laudon will be performed at the festival’s opening ceremony by the aron quartett.