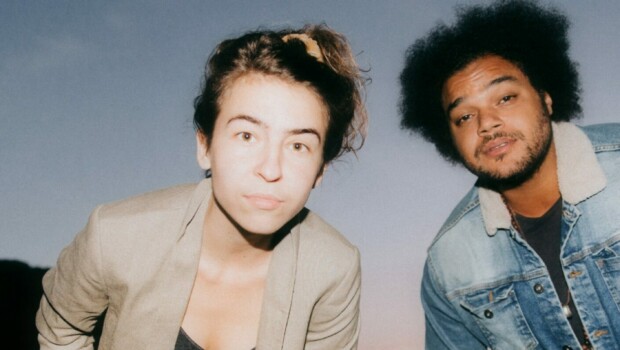 The sensational duo GAZELLE & THE BEAR released their debut album “Weird Shaped Clouds” in January 2021. Behind GAZELLE & THE BEAR are the well-known musicians INES KOLLERITSCH (LUCID KID, AMADEUS VÚLKAN, MARAVICA) and the drummer JULIAN BERANN, who has made a name for himself through working with ALICE PHOEBE LOU, SOIA and JAMES HERSEY, among others. Itta Francesca Ivellio-Vellin sat down to speak with them.

Hello you two! The album has been out for a few weeks now – how does it feel? How are you?

Ines Kolleritsch: I’m definitely much more relaxed now. We received a lot of CD and vinyl orders in the first two weeks, that was really nice. Also very unexpected – I didn’t think that so many people would order something. Even people we don’t know personally. We worked quite hard, managing the orders, taking the packages to the post office, etc. But it’s definitely nice that the album is finally out and is able to simply be.

So you’re surprised about all the positive reactions and feedback you got?

Last year, you also had great success with your single releases. Rightly of course! I also find your description, your bio, which can be read on Spotify, for example, particularly lovely: “A journey where the intimacy of singer songwriter music meets modern jazz, hip hop and R’n’B, where two musical minds are about to become one”. A very fitting sentence! Did you write that?

Julian Berann: Yes, we actually write all press texts ourselves, with one exception. We usually sit together and rack our brains.

Speaking of German – writing songs in German is not your thing, right?

Ines Kolleritsch: Not at the moment, no. I once wrote a song in German, an angry song. I was quite upset and German just worked out well. In that case I was able to use the rough edges of the language for it [laughs]. I still find some things upsetting at the moment, but don’t let them out musically. English just envelops the music we make very nicely. Writing in German is extremely difficult, it gets very cheesy very quickly.

Julian Berann: I sometimes have the feeling that you associate different things in German and that words are often very loaded due to different experiences. I just find it easier in English. Plus, it’s so wonderfully inclusive, most people understand English.

“Since we do everything together, things often work with total absence of stress and just flow naturally.”

Back to your “journey” once more: How is it going? I don’t assume that you have already arrived at the end, but what about a provisional report?

Ines Kolleritsch [laughs]: It’s really nice that we have found such a good workflow, although we really haven’t known each other that long. There is simply a completely healthy, good connection and a healthy work flow. It was impossible to predict whether it would be stressful or whether there would be too much pressure behind it, or what the business would do to you. In leading this project together, this “journey” looks completely different than when I am the only person writing and composing in a band. I can hardly compare that to now. Since we do everything together, things often work with total absence of stress and just flow naturally.

Julian Berann: We’re definitely on the same wavelength and communication between us just works. This is also a process; it has steadily improved. At the beginning, when everything was brand new, it was very easy, then there were phases where it got a little more difficult, but we managed to get closer and closer even during those times.

Do you reflect a lot about the way you work?

Ines Kolleritsch: I try very hard to do so. It’s very important to talk about it – especially when you’re not having the best day. That obviously happened to me a lot during the album production, also due to Corona. It is important to give your partner a warning in advance and to communicate clearly and as soon as possible how you like to work and how you don’t.

Julian Berann: Even while working, when you notice that you are struggling with insecurities with yourself, or you don’t yet know exactly how you want to approach something – communicating issues like this is important and we talked a lot about that. And if a session is just too difficult, you can simply break it off.

Ines Kolleritsch: … and just agree that you do not work that day.

Was it a novelty for you to work with a partner?

Julian Berann: Well, definitely for me. It is also the first time that I have also worked as a composer and songwriter on a project. I’ve never published music that was mine. Somehow, I’ve never really dared to do that, even if it was always important to me. But with Ines it was just perfect, in this safe space with her.

So did both of you grow with the project?

Ines Kolleritsch: Yes, definitely! I’ve been composing for 10 years, but in those 10 years, most of what I composed was never released. I’ve always been a loner, I’ve always composed for myself and on my own, and getting involved with another person and composing together is just a completely different world. You learn so much about yourself when you’re able to work with someone in such an intimate collaboration. This is also quite the gift, to be able to grow like this, by creating something with another person.

Julian, you mentioned earlier that before this project, you didn’t dare to publish your own music. This album, however, sounds very intimate, authentic and honest. Was it something that just had to be released into the world, or did it take some effort to publish it?

Julian Berann: I haven’t even thought about that! We just did what poured out of us.

Ines Kolleritsch: I do remember moments when I asked myself if it wasn’t too cheesy when it came to love songs, but that also stems from the background I come from and in which I worked for a long time. The whole album is really super cheesy, for most of the people I’ve worked with so far, it would be almost unbearable. That’s why I often had to say to myself “It doesn’t matter if it’s cheesy, if it feels nice and honest and good, why not write about it?” So, for me, it sometimes took some effort.

The album title is “Weird shaped clouds”. My first association was that when you see clouds in the sky, everyone interprets something different – was that the idea behind the title? Or to what extent do weird shaped clouds represent the album?

Julian Berann: The album title was created super randomly. We hung out with friends and we talked about the album and somehow that phrase came up and it just fit. We didn’t question it either. We both associate our music with a cloud of sound that you can lie in. But it’s really nice that everyone hears something different and interprets it differently.

Ines Kolleritsch: But it’s kind of cool because there’s actually nothing really poetic behind the name, more the thought “Oh, that sounds nice”. That kind of took the weight off too. How many hours of my life have I spent thinking up band and album and EP names…?!

Interestingly, I just recently spoke to a musician about this topic. Sometimes you just like the sound, and that’s enough.

Julian Berann: I also heard that James Blake writes texts the way he likes the sound of the words, and I find that a very interesting approach.

In a recent mica-interview, Parov Stelar also said that the text is not important to him – if he uses any at all. There doesn’t have to be a message behind it, often it’s cut up samples that don’t make any sense at all. Still, fans interpret the wildest things into it.

How much do you miss your other projects?

Julian Berann: I miss the whole Alice family. [note: Alice Phoebe Lou], because they are good friends of mine. And also my musical Berlin family. I miss playing with them and going on tour, I miss gigs and jamming. But it’s also just very nice to have Gazelle & the Bear and concentrate fully on this project. What I miss extremely, of course, are live performances.

Ines Kolleritsch: All the projects which I am part of are also active right now – just a little bit, but still. For example, I’m playing in a band with Xing, and now I’m also playing with Leyya. My projects are all in Vienna anyway.

Thanks for the lovely interview!