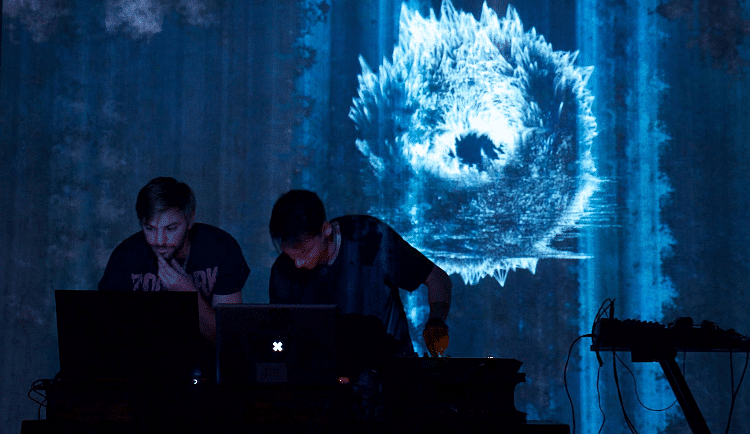 From March 13th to 18th the DIGITAL SPRING FESTIVAL will take place in Salzburg, Austria. This year’s theme is “Transhumanism”. The wide-ranging cooperation of ARGEKULTUR, FH PUCH-URSTEIN, the SALZBURGER KÜNSTLERHAUS, SUBNET and the CENTER FOR HUMAN-COMPUTER INTERACTION (HCI) of the UNI SALZBURG was able to secure a working scholarship of the province of Salzburg for the first time in the amount of 5.000, which was awarded to the media art duo APNOA (SEBASTIAN DRACK and TOBIAS FELDMEIER). Didi Neidhart did an interview with them.

APNOA sees itself as an “Audiovisual Collaboration” founded in 2013. What exactly is the relationship between the visual and the auditory in your work?

APNOA: We got to know each other during our studies in Salzburg and after a short time we found out that there are many overlapping interests, ideas and potential concepts. We experimented with Ambisonic compositions during this time (Multichannel Sound) in conjunction with generative visuals. The result was our first joint performance: APNOA Synesphere. While we were both doing internships in Munich and Berlin, we decided – inspired by the possibility of participating in an exhibition in Munich, “Big Data Art” – to create a concrete collaboration, namely APNOA.

From the outset, the premise regarding the relationship between the visual and the auditory was to establish a dialogical interaction between the two. Of course, this is not a particularly innovative idea per se. What is special about this kind of creative collaboration, however, is the manifestation of individual personalities and aesthetic preferences in a multi-sensory “language” that, at best, becomes independent.

This means that the visuals are not perceived as complementary nice to the sound – or vice versa – but that both levels are existentially interwoven with each other. Although it is definitely an AV project for us,”audio-visual collaboration” is still somehow an unspoken word and does not go far enough with some of our projects. Concept, research and an approach at the interface between art and science play a key role, especially in our installation work.

For example, we also cooperate on a case-by-case basis with scientists such as Herbert Formayer from the Meteorological Institute of BOKU Vienna on our performance/installation “Xenotopia”[ (first performance at the ISMAR Festival for Augmented Reality, Fukuoka, 2015) whose numerical source material is essentially a scientifically sound climatological data set. Furthermore, we often work with dancers, actresses and actors, cinematographers, etc. In essence, however, it is always about audiovisual/multi-sensory narration.

Installative “media art”, as it is made by APNOA, has been around since Fluxus and has had internationally renowned representatives from Austria with people like Valie Export, Peter Weibel and Station Rose since the 1960s. It is always about artistic interventions with, on the basis of, or because of new technologies. How difficult is it to keep up to date technically and technologically? Or is it not so important to know if there are other communication platforms on the net besides Twitter or Tinder?

APNOA: As we all know, the wheel is not reinvented every two years and I believe that some practical-artistic concepts, such as the examination and critical analysis of the implications of technology for the construction of individual and collective realities, do not really change. What changes, however, are technology-specific conditions, and this inevitably leads to an adaptation of the artistic questions.

For example, Brecht saw a potential for dialogue in the emergence of radio, which was generally associated with a social added value. This thesis has historically proved to be an artistic utopia. Dialogical aspects can be observed today in the (a)social networks mentioned above, but I am not so sure whether these forms reflect Brecht’s thoughts.

The installation “RealFakeFakeNewsBot” is part of a more or less dialogical network. We are more interested in these fundamental changes in communication structures, as if this or that internet platform is currently gaining popularity for one reason or another. Today, however, Twitter can probably be seen as one of the more influential networks in the political sense. However, it is much more important for us to understand and be able to intervene in digital structure.

For our works, which can be subsumed under the collective term “digital art”, knowledge of these digital infrastructures and the possibility to intervene through programming are of substantial importance.

In addition to performances in Salzburg, Hallein, Graz and Linz, installations have also been shown in Fukuoka, Munich, Lausanne, Prague and Krakow. How did these international appearances come about?

APNOA: These valuable experiences at international festivals were achieved through an individual mix of personal motivation, enthusiasm and trust from mentors, curators and organizers. One can of course also develop experience and projects, which tends to increase the chances of being invited to specific events.

Your project is called “a robotic audiovisual installation”. What can or should one imagine underneath?

APNOA: The robotic or botanical nature of the installation is revealed by the process-individual characteristics of the system, which – at least – have one thing in common: in a characteristic algorithmic way to process task by task in the physical as well as in the virtual level, and this with a thoroughly dispassionate methodology, which immanently resides in technical systems of this kind. Basically, this installation is part of a series that can also be called talking sculptures. As in the work “bias”(2013,2017) textual source material is available and the installation “speaks” what it “thinks”.

One approach is to generate new content or “real fake fake news” from fake news through a “poetic methodology”. How does this transformation work and how do I know the difference between “Fake” and “Real Fake Fake Fake News”?

APNOA: This “poetisation” of Fake News is not to be understood as a romantic transformation process with a focus on the “beautiful language”, but rather as a radical deconstruction of the linguistic source material and a subsequent construction of the content to be generated – and potential levels of meaning – according to structural-poetic aspects.

The transformation process takes place in several steps. The source material is read out with appropriate text analysis tools and recomposed according to methods of probability statement – as presented by Markov Chains, among others – and the inclusion of poetic structures, read by text-to-speech synthesis and transferred to the RealFakeFakeNews-Twitter profile.

A basic theme of the installation is the manipulation of public opinion. How much can media art or audio-visual installations beyond the commonplace – such as “All art is political” – open up resonance spaces in which the “political” can even occur beyond the aesthetic in the sense of a person reflecting on society? Does it require certain precautions, embeddings etc.?

APNOA: Of course, we need a broader social discourse or the – personal – commitment of experts from different professions and above all civil society efforts to generate something like “politics”. An installation or art in general can do little good on its own. What art can achieve is to stimulate discourse, for example by means of exaggeration, as in this case. In addition, the focus can sometimes be placed on poorly considered perspectives.

For us it is important that discursive potential is hidden between the lines of a superordinate message or thematization of a work. Populistic analyses and idealizing manifestos are part of everyday political events. This rhetoric can get rid of art. We want to open up a democratic approach to content and use our artistic creativity as a catalyst for social discourse. This implies above all an interdisciplinary cooperation between actors from the empirical, intellectual and phenomenological sciences and from the public sphere.

This does not mean that we are avoiding political opinion, opinion or positioning. But does a constructive dialogue live on diplomatic communication? Media reports show us every day how the world flies around our ears, and contemporary political art likes to pick up on these themes and wants to offer solutions in the form of a “RESIST” banner above the White House or a printer in a hotel in Istanbul. The content discussion in the public usually ends with its media presence. The mere indignation thus leads to a dead end. The politically motivated documenta in Athens, for example, obviously does not change the political situation in Greece in all its facets.

“F for Fake” is the last film by Orson Welles, completed in 1974, whose radio adaptation of “War of the Worlds” from 1938 is mentioned in your project description. Now Welles’ fake news is of a different nature and asks different questions than those of Donald Trump, for example. Would you say that discourses about “fakes” in the context of art can also have positive effects – à la “What is genuine, original etc.”?

APNOA: The question of authenticity or truth is probably a quite constructivist one, at the end of which one probably finds Plato’s cave simile. In an analysis that is not quite as far-reaching, we are not quite sure what positive effects can be brought to light by art. At least it is also a question of reception. In general, art is also fake, it is artificial, artificial, but it also has the potential to have implications for realities.

Digital Spring is virtually a follow-up project to the Salzburg media festival basics. You both studied at the FH Puch-Urstein “MultiMediaArt”. How do you see the situation of media art in Salzburg? In addition to such festivals, are there opportunities for presentations or mutual exchange?

APNOA: There are some good networks in Salzburg that have helped us a lot in this respect. The Schmiede Hallein was for us something like a starting point and we got to know many good contacts there, many of which became friends and companions. With four residencies per year, the media initiative subnet offers time and space for the development of projects. The cooperation with the Center for Human-Computer Interaction (HCI) of the University of Salzburg is also interesting.

We were also supported in our activities by our university (FH Puch-Urstein). With the annual festival Creativity Rules in Hallein, there is an attractive opportunity for public presentation from this side. In addition, there are also initiatives by students, such as the Master’s project “disposed”, which is dedicated to the use of vacant spaces in interesting locations and which, in our opinion, has been or is very successful.

One could of course open up a few more options on the part of the city government, there is enough potential. No less noteworthy is the Galerie 5020, which, in addition to the regular exhibition business with 5020 Performing Sound, has also established an innovative event format that is now well known beyond Salzburg.

How do you finance your projects?

APNOA: The financing of the projects varies considerably from one project to another. Especially installations in our case are usually cost-intensive and time-consuming to prepare. We are very grateful for the working scholarship for media art of the province of Salzburg, which in this case also covers the working time financially. However, this is more the exception than the rule. In the past, we have been supported financially and/or structurally by various institutions, including Creative Europe (EU), UNESCO, Austrian Culture Forum. Of course, a political will is also needed to provide public funds for discursive media art. In any case, subjective feeling of security is created by a cultural community and not by even more police officers on horseback.

Are there already considerations for the future?

APNOA: Probably the most extensive project for 2018 is our debut album, whose release is planned for the end of the year. We have accumulated a lot of material over the years and we need to get it into shape. In addition, a number of festivals have already been fixed, and in the near future we will be concentrating primarily on performing works and want to develop a new live set-up.