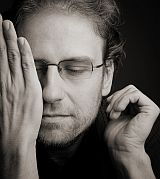 In terms of today’s most significant and important personalities of the local jazz scene, one of the top names on the list is Georg Breinschmid. Numerous extraordinary projects show that this musician strives for creative freedom and has no fear when it comes to exploring new ideas. Unlike many other musicians, Georg Breinschmid has impressively succeeded in almost every music genre.

No matter in what musical context, the award-winning musician preferably moves along the transitions between different musical styles. He does not think much of constantly repeating himself, but rather seeks to diffuse retracted listening habits in order to avoid the risk of getting lost in randomness. Driven by curiosity and ambition to render the extraordinary, the Lower Austrian creates his very own unmistakable sound language, which finds its expression somewhere between jazz, classical music, world music and improvisation.

Born in 1973 in the Lower Austrian City of Amstetten, Georg Breinschmid claims that he decided to learn an instrument relatively late. “Unlike my two older brothers, who were already professional musicians years ahead of me, I was a late starter and for some reason, I struggled a long time with the thought of learning an instrument. The thing with the bass then came by chance, because two of them were lying around in our house and so I casually started plucking around on them. And that is how it all started. I was about 14 years old at that time, comparatively late,” said Georg Breinschmid in a mica-interview two years ago. This only underlines the pronounced musical understanding of the bassist, who now lives in Vienna. Although always fascinated by jazz, he first made a long musical detour before he turned to jazz.

At first Georg Breinschmid studied classical bass at the University of Music and Dramatic Arts in Vienna. Soon first engagements with major orchestras, such as the Austrian Vienna Philharmonic and the Vienna Symphony, and various chamber music ensembles, such as the Amadeus Ensemble, Ensemble Kontrapunkte and the Ensemble Die Reihe, followed. He also spent several years as a member of the Lower Austrian Tonkünstler Orchestra. Over time, however, Breinschmid felt more and more driven towards jazz, where he expected to be able to develop and express himself more as a musician. “For me it’s like I’ve always had a more natural access to jazz than to certain parts of classical music. Even today, I sometimes still can’t find a real emotional connection.” says the bassist.

He decided to turn his back on his orchestral career to take his musical career to the next level as a freelance jazz musician. Soon enough, he succeeded in establishing himself as one of the most accomplished and versatile bassists in the international jazz scene. Many collaborations with big leaders of the music scene, such as Archie Shepp, Charlie Mariano, Kenny Drew jr., Biréli Lagrène, Wolfgang Muthspiel, Triology, Megablast, Harry Sokal and many others, followed. Between 1999 and 2006, the Lower Austrian was also a constant bassist of the world famous Vienna Art Orchestra.

Since 2005, Georg Breinschmid has also been increasingly working as a composer, although this also took its time, as the multi-faceted musician admits: “Although I always played improvised music, I never composed a single tone up to the age of 30. For a long time I didn’t even try, simply because I didn’t dare to. I then only started, because I thought I should at least try it once. So I tried it, and behold, a whole new field of activity opened up for me.” Since then, his compositions have been performed by the Ensemble Amarcord Wien, the Duo “Bach & Bosnisch“, the ensemble Bass Instinct and many more.

In all of his musical activities, Georg Breinschmid always presents himself as a tremendously versatile chameleon. All of his publications and projects are evidence of an extraordinary openness to different styles. Whether he celebrates the fine art of improvisation with his long-time colleague Thomas Gansch, or plunges into the world of Balkan music, as on his highly acclaimed CD “Wien bleibt Krk”, or walks in Franz Liszt’s footsteps together with the Janoska brothers in the formation Brein’s Liszt Cafe, Georg Breinschmid seems to always be one step ahead.

Georg Breinschmid’s openness, curiositiy and love of experiment constantly inspire the bassist and composer to strive for unprecedented creative excellence. With his ability to reinvent himself again and again, we may assume that this extraordinary artist is far from reaching the end of the road.