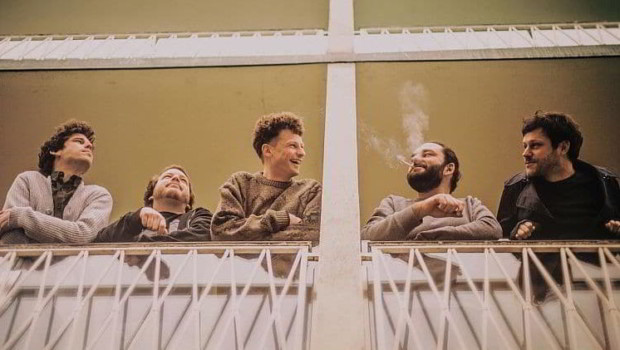 “If Bilderbuch is David Bowie and Wanda the Rolling Stones, then GRANADA are the Beatles,” predicted Thomas Petritsch, frontman of GRANADA, all the way back in 2016. What first started as a project for the Austrian movie “Planet Ottakring”, eventually evolved into an independent music project and now to a festival headliner. Their songs have several million plays on YouTube and Spotify. They were nominated for two Amadeus Austrian Music Awards and are played in heavy rotation on German-language radio stations. On the 22nd of June 2018 the second album “Ge bitte!” was released by Karmarama/Sony. It shows that GRANADA have remained true to themselves both stylistically and lyrically – you can also hear that they have matured.

Just like the debut album, their new work is thematically mixed. “Ge bitte” captures impressions, moods and subtle commentary, changes from one thought to another. There is the sophisticated whining in “Miad vom Tanzen”, or the existential search for meaning in the song “Mallorca im Regen”. But the passion, the love for the band and the music itself are always in the foreground. The classic, cheerful and life-affirming number “Gin” is an example of the classic Granada sound and can be understood as a follow up to their summer hit “Pina Colada” and greets the hot weather while jumping and cheering, in a pretty flowered dress.

The mist of time won’t blown away any more

Whatever crosses GRANADA’s minds will eventually be processed musically. “Die Stodt” (“The City”) is a critical snapshot of the current situation. Cold, burnt out and desolate. In the music video, white-painted statue people walk through an equally colourless landscape as an anonymous unified mass. The message is clear: why don’t we live and laugh like GRANADA? Therefore the sound remains – perhaps as a challenge – lively, rocking, and positive. If you don’t listen to the text, you might accidentally laugh in the wrong place – if a sense of humour in this situation is possible at least.

One can definitely smile at the track “Berlin”, in which a failed love relationship including an inferiority complex is the topic. And who is to blame? Fucking Berlin, of course! At the same time, according to Petritsch, the song is a declaration of love to this city. He particularly appreciates its character and charm, even though this time it had to take the role of the scapegoat.

“Ge bitte” combines indie rock with accordion and dialect lyrics, humour, depth and a summer feeling. Fans of their previous work can look forward to the upcoming tour with a peace of mind. For everyone else: anyone who yearns for their next seaside vacation and sipping cocktails on the beach should treat himself to the new GRANADA album right now! And maybe buy some palm trees for the balcony.