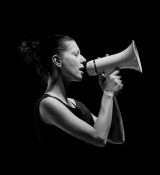 “My music goes through your mind, not through your legs”. This is what Eva Jantschitsch a.k.a. Gustav claims about her own work and she certainly has a point. Who doesn’t remember her song “Rettet die Wale” (in English: save the whales)? Not only Greenpeace activists had their fun with this slogan. The song does not invite you to dance, you rather feel obliged to never eat canned tuna again. Protest songs are definitely the strength of the native Styrian. And these politically inspired contents combined with such sweet melodies motivate twice as much to go protesting or make a change in your environment.

Eva Jantschitsch grew up in Graz, the capital city of the federal state of Styria. At a very early age her parents supported her musical education, therefore, she started playing the violin very early. However the daily practice was only half as much fun as initially thought and so she did not turn into a musical wunderkind, but into a congenial singer, who has still conquered the stage, even though without classical fiddling. Despite having no actual intent to become a violin virtuoso and in order to make her parents happy, Eva adopted the stage name Gustav. This was the name she would have been given, if she would have been born a boy. Two souls probably sleep in the talented musician, which result in a fascinating symbiosis of art. The one soul shows an unbiased Eva Jantschisch who has moved from Salzburg to Vienna to study visual media design and digital arts at the University of Applied Arts, the other soul shows up as Gustav who works on her projects with a feminist and social-critical attitude despite the male name. These two souls do not lack creativity and definitely do not allow any interference. As a result, the debut album “Rettet die Wale” was created and produced completely alone in a so-called “bedroom production”. From the electronic sampling, the playing of most instruments up to the artwork of the cover, this lady has taken it all in her own hands. The hard work was rewarded. A year after the release of her debut, Gustav was awarded the Amadeus Austrian Music Award in the category “FM4 Alternative Act of the Year”. With so much positive feedback, it was an easy task to start working on a new album, especially if one has, as according to Eva Jantschitsch, so many more ideas in store.

In 2002 Gustav made her first steps towards a musical career at female band festivals in Vienna. These initial contacts in the feminist movement are also reflected in some of the songs, for example the tracks “Little Weird Grrrl” or “Total Quality Woman”. The second album “Verlass die Stadt” (in English: leave this city) was released on the label of the German female band “Chicks on Speed”. Compared to her debut, Gustav strikes some slightly darker tones on the new album.

The first album “Rettet die Wale” mainly refers to the troubled years of the last decade and focuses on themes wrapped around globalization and similar issues. Packed in playful lyrics and joyous melodies, the album “Verlass die Stadt” includes the funeral march of the Dürensteiner Trachtenkapelle (a traditional Austrian marching band from Dürenstein). This shows that the album definitely does not lack versatility. The lyrics are not only in German, but also in English. Electronic sounds are integrated, as well as analog instruments, from the piano, strings to brass instruments and jazzy electric guitar. Quotes from famous and lesser-known poets and thinkers adorn the texts, as well as her own clever and witty poetry. Some of the sounds are very reminiscent of songs and hits of the 50s. It is not really a surprise, that Gustav has been called “the Austrian version of a mixture of Bjork and Caterina Valente”. The somewhat theatrical nature of her music has also left its mark in the theater and film world.

Thus, Eva Jantschitsch has arranged the music for the documentaries “5 ½ Roofs” (by Sepp Brudermann) and “Gangster Girls” (by Tina Leisch), and has musically supported many theatrical plays. In addition to her Gustav-solo project, in which she is mostly accompanied live by the two musicians Oliver Stotz and Elise Mory, Eva Jantschitsch has also collaborated with many other Austrian colleagues. With Rainer Binder-Kriegelstein she recorded the song “Pirates” and also co-wrote the song “Yola” by Franz Reisecker a.k.a. Lichtenberg. It is not likely for this exceptional Austrian talent to get bored soon. Until the next release of a new Gustav album, we will have to wait patiently and be content with the meager political poetry of various newspapers.

Bibiana Weinberger
translated from the German by Doris Miyung Brady