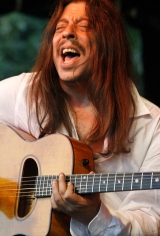 For 40 years now, the guitarist, composer, arranger, bandleader and vocalist Harri Stojka has fully dedicated himself to music. Today this  multifaceted artist is without a doubt one of the most internationally renowned and successful jazz musicians in Austria. There is hardly an attribute which has not been used to describe the award-winning musician, singer and composer Harri Stojka  – unusual, complex, multi-faceted, touching, etc. Whoever had the chance to witness the guitarist live, knows of the stylistic diversity and energy of his music. Harri Stojka sees himself as a musical ambassador between cultures, as a bridge builder, as well as both a Viennese and Roma. His “Gypsy Swing” is reminiscent of the rich and diverse folk songs of his people, which have always existed as an indivisible unity of interpretation and improvisation. A tradition of development, which has been continued by Harri Stojka in the finest manner.

Born in 1957, a central concern of the Viennese guitarist has always been to make a living and active contribution to the musical culture of the Roma. Harri Stojka himself says: “With my music, I want to bring  the history of my people closer to the audience and also point to the musical present. We, the Roma and Sinti, have found our home in our music. With my lyrics, I also want to make people aware of the language of our ancestors, Romany.”

The way Harri Stojka plays his instrument is simply unmistakable, the way he improvises is absolutely unique. The stylistic repertoire of the open-minded musician ranges from jazz and blues to soul to swing, all mixed up with the unbridled passion of a true Roma musician. The guitarist and composer creates wonderful unique acoustic sound images in his songs, which don’t necessarily need words to tell beautiful stories and are detached of all time.

Coming from a very music-loving family, Harri Stojka’s musical career was already paved at a very early age. On the suggestion of his older sisters, the Vienna-born musician listened to the Beatles and George Harrison for the first time. A moment in time, as the Viennese says, which was a big eye-opener. But the young Harri Stojka was especially encouraged by his father. “When I was six years old, he noticed that I had developed a very strong affinity for stringed instruments and bought me a little plastic guitar from the annual fair ,” said the musician. Initially he taught himself how to play and practise with his newfound love, the guitar. “Practice, practice, practice, – until your fingers burn,” as his father always used to say.

He first performed on stage at the age of 13 with his cousin Jano at the Viennese Arena, back then the most important venue of the Viennese youth scene. Harri Stojka received his first real guitar lessons many years later, shortly before he joined the band Gypsy Love. Head of this band was none other than his cousin, Karl Ratzer, who has been celebrated as an international jazz musician since the sixties. These years sustainably shaped the talented musician. 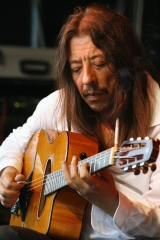 Besides Karl Ratzer, it was also Django Reinhardt who had a huge influence on Harri Stojka. Despite all the perfection, it was above all his technical virtuosity coupled with the ability to fill the music with life, which made the Belgian guitar legend a major role model. “I’m interested in Django Reinhardt’s multifaceted guitaristics, which never get boring,” says the now 54-year-old. In the beginning of the eighties, Harri Stojka eventually rose into the first league of European jazz guitarists. Even today, his solo concert in Montreux 1981 is still legendary. Many excellent and highly acclaimed releases followed, as well as extensive tours through Europe and the rest of the world.

Besides music, Harri Stojka has always been interested in his own ethnical and musical roots. For this reason, the guitarist went with his fellow musician Mosa Sisic and filmmaker Klaus Hundsbichler on an extended trip to India in 2010, which took him to Rajasthan, a province in the northwest of the Indian peninsula. This extraordinary journey was impressively documented in the film “Gypsy Spirit: Harri Stojka – A Journey”, where of course the music played a central role.

Most recently, the exceptional Austrian guitarist proved yet another stroke of genius with the album “GitanCœur d’Europe”, which was released in April. Once again, the Roma musician and Viennese original manages to present himself as one of the most eclectic and diverse musicians in the country. It shows that Harri Stojka is far from having reached the end of the creative flagpole and will probably still inspire his fans for a long time.