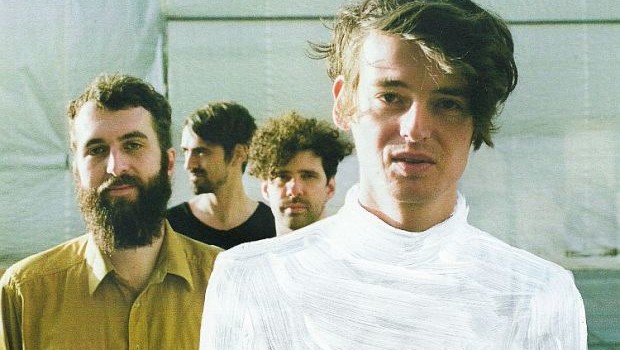 With “Goods / Gods” (Tomlab), the Upper Austrian high-flyers of HEARTS HEARTS present a strong and convincing piece of work. Their second album is both extremely clever – from songwriting and the approach to instrumentation – and it is highly emotional in all the right places. “Goods / Gods” is full of all kinds of “Goods” to take HEARTS HEARTS to the alternative top!

The opener “Phantom / Island” starts with a pleasantly wacky synthesizer and takes no prisoners. In the next moment skillfully played rhythms à la Radiohead quickly grab the attention of the alternative-oriented audience. With the title track “Goods / Gods” the next highlight follows and singer David Österle underlines his exceptional skills among the Austrian indie vocalists. Interestingly enough, in 2018 and 1970, nothing seems to work without a synthesizer, which is why the charming head voice is allowed to tower over repetitive sound synthesis here as well. Altogether on “Goods / Gods” there is a real hodgepodge of sounds and timbres besides the synths: electro percussion, falsetto to soul vocals, brass, drum machines and constantly pulsating basslines. Of course, unconventional sounds are also tickled out of the guitars as well.

ATTENTION TO DETAIL AND ACCESSIBILITY

Despite this rather avant-garde orientation and line-up, HEARTS HEARTS often manage to be enormously catchy and accesibile. And it is exactly this balancing act that makes the Quartet irresistible. On the one hand there is a pronounced tendency towards attention to detail, on the other hand it is always about the song. The Feel-good audience as well as headphone audiophiles who enjoy every minute of frequency change and every stereo panning are catered to. Since producer Peter Paul Aufreiter joined the band as a member during the development process of debut album “Young”, this differentiated approach to sound and mix is not surprising.

One of the absolute highlights of the album is “To have / to be”. The sound layers constantly overlap, but not only for the sake of sound density: They create a unique and sublime emotion. You can’t go wrong with expertly implemented brass parts. Even courageous songs like “I / O”, in which the voice of David Österle is once again skilfully and minimalistically staged. This character voice is certainly also one reason why HEARTS HEARTS are frequently mentioned in the same breath with absolute greats like Radiohead and Alt-J. Their fans can’t go wrong with “Goods / Gods”, they can only be surprised that such formidable music is also made in Austria and not only in Great Britain.