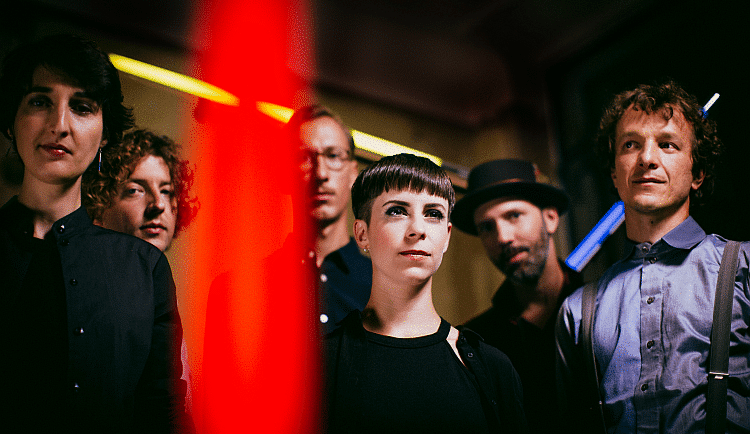 A profound piece of music with a light-hearted tone that lets you forget the dark and heavy things of this world for a few moments. LAURA WINKLER and her band HOLLER MY DEAR go against the negative mainstream of opinion on their new album “Steady As She Goes” (Traumton Records). Fighting eternal pessimism in a musically wonderful way.

If you read the newspapers, follow the news, or just surf the net, the same picture appears everywhere.”Bad News” reigns supreme, those reports of terrible things somewhere in the world or maybe even right on your doorstep. It almost seems as if every spark of hope faded a long time ago and the way was paved for a path to pure cynicism.

But is it really so?

The Graz-based singer and composer Laura Winkler and her band Holler my Dear want to use their new album to give hope. They resolutely confront the rampant pessimism and media-inspired dread. And they do this with a very positive vibe. With one that makes the listeners swing their legs and opens the doors to a good mood. The great thing about it is that Holler My Dear never get lost in the superficial, but really score points with incredible musicality.

BEAUTIFUL MELODIES AGAINST THE NEGATIVE IN THIS WORLD

The Berlin-based troupe has traveled extensively over the last two years, playing overseas, in Europe, and in Asia, meeting many people, and gaining just as much experience. And that’s exactly what you can hear on “Steady As She Goes“. In retrospect, the first two albums “Have You Seen The Troll?” (2013) and “Eat, Drink and be Merry” (2015) are really strong harbingers, they show the promise of great things yet to come. A promise which has now been impressively and maturely delivered upon.

The artist with her expressive voice and her fellow musicians Fabian Koppri (mandolin, vocals), Stephen Molchanski (trumpet, vocals), Valentin Butt (accordion), Lucas Dietrich (bass) and Elena Shams (drums) have delivered a multi-facetted piece of music that reaches out and grabs the listener.  The sound that the six-pack brings to life on their new album is one with a wonderful cross-style touch. Folk crosses with pop, playful jazz, French musette, sounds and melodies of the Balkans, rock, disco and much more. Sometimes it’s lively and fast (“Steady As She Goes“,”Nemories“), sometimes beautiful (“Seeds Of Concord“), then seductively elegant (“Little By Little“) or dreamily melancholy (“Orchid Song I“,”Zwischen den Staedten“).

Laura Winkler and Holler My Dear delight their audience with an album which can be listened to over and over again. On that is brimming with wonderfully seductive moments. “Steady As She Goes” reveals itself as a listening experience full of beauty, great passion, and intense depth. An album that truly grabs you and won’t let you go.