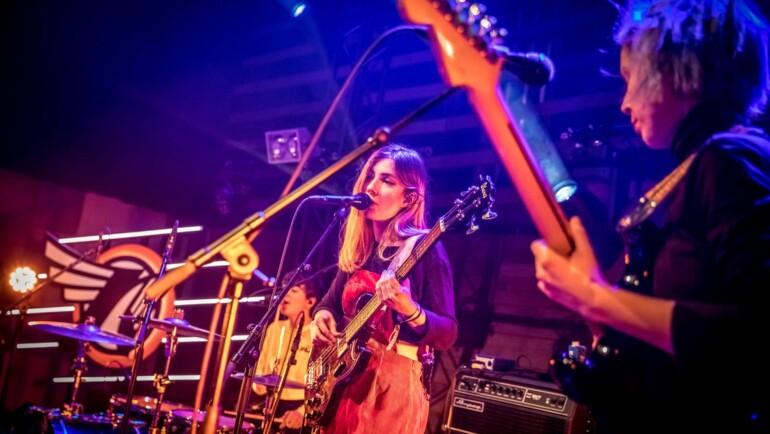 Every January hundreds of acts compete for the attention of the assembled music industry at the Eurosonic Festival. The Eurosonic Noorderslag in Groningen in the Netherlands has been one of the most important talent and showcase festivals for the music scene in Europe for many years and is an important business meeting point. It offers a great opportunity to network with industry insiders while enjoying a varied programme and seeing future favourite acts before they are known to a wider audience.

At the ESNS (Eurosonic Noorderslag) Festival one could discover new bands for the 34th time this year from January 15th to 18th. From Austria 5K HD, Anger, DIVES, Friedberg, My Ugly Clementine and Wurst were booked for the festival.

The ESNS conference which is an integral part of ESNS took place this year for the first time not only in De Oosterpoort but also in the impressive Forum Groningen. As in other sectors, there is an increased focus on environmental and climate protection in the music industry. The main topic this year was therefore “Sustainability”. During the 4 days 4,323 registered delegates were able to visit more than 150 panels.

Over 4,000 music professionals from 44 countries attended the festival. A total of 347 acts from 33 European countries could be heard in 42 venues. The main focus this time was Switzerland with over 25 acts.  It is good to see that ESNS is aware of the discrimination of women in the music scene and wants to eliminate this unequal treatment. 50% of the musicians who played at Eurosonic 2020 were women.

The trip to Groningen was particularly worthwhile for 5K HD. The Austrian avant-garde pop group is one of eight winners of the Music Moves Europe Talent Awards 2020 which was launched by the European Union last year and is awarded to up-and-coming musicians in the field of popular contemporary music

5K HD received the award from Tom Neuwirth, better known to many as Conchita Wurst orWurst, and they were highly satisfied: “For us, a very successful Eurosonic Festival took place. Due to the nomination for the Music Moves Europe Talent Award a showcase slot in the wonderful Stadschouwburg – one of the biggest venues at the festival – had been booked in advance and we were invited to a filmed live session at the Grand Theatre”.

On the first evening, from an Austrian point of view, only Tom Neuwirth with his new pseudonym Wurst played in the Stadschouwburg, the municipal theatre of Groningen.

The new electronic, danceable and sometimes polarizing style was implemented in the large theatre with impressive visuals. Two days later Tom Neuwirth was still in the same location as presenter of the Music Moves Europe Talent Awards. He also mastered this performance with sovereignty.

On Thursday evening 4 acts from Austria were active. Friedberg played at the Hooghoudt Barn right in the city center. Anna Friedberg remembers a successful visit to the Netherlands: “We had mega fun and a great gig – to our surprise we even played on the second biggest stage of the whole festival and it was totally packed with about 600 people. The days after our gig some new festival-offers came in – among others some from the U.K., which we are very happy about. Anyway, the trip was totally worth it just for that”.

After their performances at c/o Pop, Popkultur Berlin, Reeperbahn Festival and Waves Vienna, where they won the 2nd XA – Music Export Award, the ESNS was another stop for the three friends of DIVES. With their debut album, released in November on Siluh Records, the surf rock trio was able to convince the audience in a full Huis De Beurs.

More or less at the same time My Ugly Clementine played in Vrijdag. Already in the run-up to the gig the band was mentioned again and again as a “must see”, accordingly there was a long queue in front of the door and not all visitors could find a place inside. It was the second gig of the band on this day because they played an in-store session in the afternoon at the legendary Plato Record Shop. Hannes Tschürtz of Ink Music describes his impressions: “Eurosonic 2020 was intense and enormously positive for My Ugly Clementine. Two shows, an enormous number of interviews, great feedback and an eternally long queue before the shows – which is always a good sign and a bit of a pity at the same time. Groningen was worth the trip! We already have a very dense calendar for the year and we hope that this trip will make it a little bit more colourful!”

Anger, consisting of Julian Angerer and Nora Pider, with the recently released debut album in their travel-bags, had plans to make contacts in neighbouring countries at the Eurosonic Festival. After several festival shows in 2019, including Maifeld Derby (GER), Frequency Festival (AT), Sonar Festival (SP), the renowned Reeperbahn Festival (GER) and Waves Vienna (AT), Anger already know what it feels like to stand on international festival stages. Their gig supported this idea, the duo went on to convince the audience with their Dream Pop and got positive feedback.

The second day of the festival began for the Austrian industry representatives at the Austrian Networking Lunch, organized by Austrian Music Export. Many of them took the opportunity there to get into conversation in a relaxed atmosphere with contacts who till then had only been known through electronic means. Manager Sandra Walkenhofer “Informal yet arranged in a clear way. Nice, bright restaurant located directly on the waterfront, pleasant atmosphere and a nice networking event”.

The last gig under Austrian participation at Eurosonic 2020 could be seen at the same place where the first concert of an Austrian group on Wednesday already took place – in the wonderful Stadschouwburg. After the award ceremony and the presentation of the prize 5K HD were able to convince the crowd with their mixture of jazz, sound experiments, pop and subtle funk.

Manager Tom Tanzer writes: “We were able to win the award and are happy about the prize money of 10.000 Euro, which can be invested very well in touring and promotion during the next months”.

From now on we are watching with excitement which fruits the bands will have harvested from the gigs at the ESNS 2020. Regularly the festival publishes lists with bookings and radio airplay of the bands present at the festival. With the performances at the festival the acts from Austria have definitely been successful and gained further visibility.

In the European Talent Exchange Program (ETEP) AME is acting as the official Austrian representative. The EU program aims to support musicians and festivals in their internationalization. Concerts arranged through Eurosonic are supported by the EU programme ETEP. So far, artists from Austria such as Bilderbuch, 5K HD, Manu Delago and Leyya have benefited from ETEP.

AME is also a partner in the non-profit organization European Music Exporters Exchange (EMEE). The network of 24 European music export offices aims to create cross-border synergies. To this end, EMEE provides strategic advice and training for artists, labels, publishers and festivals on music export issues. EMEE also acts as a representative of its members’ music export interests when talking to European and international institutions. So far, around 10,000 European music professionals have benefited from the EMEE program.