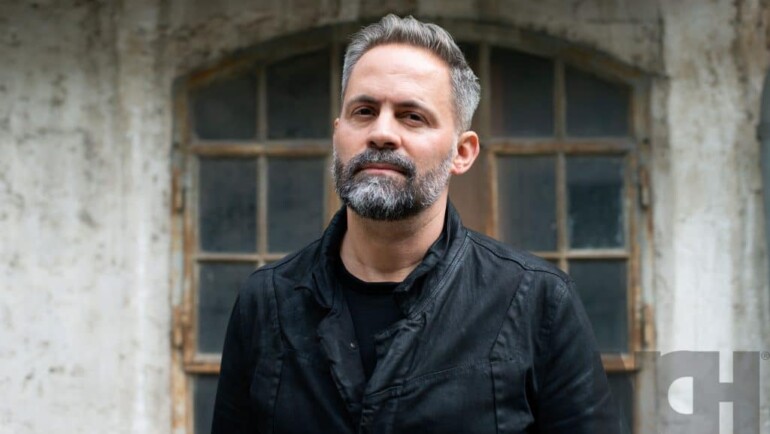 CARAMEL, the latest project of ULI DRECHSLER, is part of a bigger idea: under the umbrella brand LIMINAL ZONE further releases will follow in the next months and years, starting now with CARAMEL. In an interview with Jürgen Plank, ULI DRECHSLER explains why he never wanted to be restricted to one genre, what he paid attention to when selecting his artistic comrades-in-arms and which sounds interest him.

Your current release under the band name Caramel is part of a larger project involving musicians and artists from various areas. Which configuration have you got in mind?

Uli Drechsler: I have made a lot of different music over the last 20 years, starting with Café Drechsler, jazz, electronics, music for films and so on. It has always been my wish to present everything I do in a more compacted way. So far, it has always been that I did a project which then fell apart after a year or two. Now I have created the platform Liminal Zone.

What happens on this platform?

Uli Drechsler: On Liminal Zone, three independent projects have been created parallel to each other over the last three and a half years. Caramel, the first to be released now, has the most references to jazz, world music and neo-classicism. Azure is a trip-hop project, we will release an EP in autumn of 2020 and next year we will release Chrome, a string ensemble with live electronics. It’s very much inspired by music for films. All this is laid out in a huge modular system, so that you can combine the projects. I have built my own box of music bricks. I’ve always been interested in not just committing myself to one genre, but in getting the best from everywhere.

If the three projects are so flexible and the musicians change among each other: can the music be created live only through improvisation?

Uli Drechsler: I’ve never written as much music as I have in recent years, I’ve now reached about 700 to 800 score pages. Simply because of the musical influences that interest me, the music is very clearly structured. There’s also the idea of putting a large orchestra together in two or three years, where everything is combined. The basic idea is to be able to work as flexible as possible with everything that I enjoy. I took a lot of time for the preparation, the idea was born 5 years ago, I started composing three and a half years ago.

Have there been any live presentations yet?

Uli Drechsler: We played test concerts at Supersense and Musikverein between autumn of 2018 and summer of 2019 to see how the music works live and how the musicians harmonize with each other. We will now have releases at regular intervals and set up activities with all three individual projects.

During the years of preparation you certainly had a lot to do with organizational tasks. How do you manage that and how did it start?

Uli Drechsler: I am a super-sloppy-organizer! (laughs) No, I can organize well; probably I owe that to my German origins. I quickly establish a clear structure for every project: where do I want to go, what does it cost, what are the benefits? That sounds a bit commercial, but it has to be, because otherwise you run a great risk of falling on your face. That has happened to me a few times.

How many people are currently involved in Liminal Zone?

Uli Drechsler: About 15 musicians, a graphic design office, a photographer, a filmmaker, now we are in the process of developing various visual concepts. It’s a cross-genre “Gesamtkunstwerk”, i.e. a synthesis of the arts.

Your part is of course the music and as I know, you are always looking for sounds and therefore a sound researcher. When do you become interested in a sound?

Uli Drechsler: When I feel it, it’s very simple. As a listener-musician I define myself through kinaesthetics, when I get goose bumps as a listener or am emotionally touched, then I know: that’s something for me. I really listen to everything, from jazz to electronics to world music. Whenever I like something, even if it’s only a tone or an interval, I pick up an idea from it. Sound conveys emotion. Sound conveys that which makes music as a universal language perceptible and audible. And it’s also the smallest musical denominator: whether it’s a symphony, a rock or a jazz band. It’s always about the sound. I talked a lot about this with the great Norwegian pianist Tord Gustavsen who is a sound seeker too. On good evenings he sits down, presses a key and you have the feeling that everything is in there. Because it’s so intense and authentic. I have always been interested in the following: I want to touch people authentically on an emotional level and it doesn’t take much to do that.

Not only music has a sound, but words too can be used musically. How did Yasmo get involved in the Caramel project?

Uli Drechsler: Yasmo contributed a track to Café Drechsler’s last album and I thought that was great. Up to that point I didn’t know her, I have to confess to my shame. Then quite quickly the idea came to me that I would like to have two female vocalists on Caramel: on the one hand Özlem Bulut, who sings coloratura soprano, which is very exciting. Nonverbal, therefore no words. And Yasmo recites. I gave her a few ideas what the pieces are about and she wrote the recitatives. I gave her completely free rein in that.

Because you’ve already mentioned the keyword music for films: when I listened to the Caramel CD, I thought of the film “Caro Diario” by Nanni Moretti, the music for it is, among other things, the Köln concert by Keith Jarrett. What do you think of this association?

Uli Drechsler: One of my main sources of inspiration is films and music for films. I go to the cinema enthusiastically and watch all kinds of things, even the biggest bullshit. At the moment music for films is the new classical music for me. If you think of composers like Ólafur Arnalds, Max Richter, Daniel Pemberton or John Williams, they are being celebrated everywhere right now. Quite rightly so, film music has become a concert genre in its own right over the last 10 to 20 years. I find it exciting to see how the styles of film music are mixed up in the wildest way possible. Pop with classical music, jazz, rock and electronics. This is great and always serves to support the dramaturgy of a film. Film music never puts itself in the foreground, I think that’s especially great. That’s what I’ve adopted for my own music: I want to tell people a story, but they should let their own imagination run free.

“EVERY FORM OF ART HAS A MISSION TO ENTERTAIN, THE PUBLIC WANTS TO BE ENTERTAINED”

In the last few years you have also performed live to classic silent movies like “Nosferatu”. Do you think about the audience when you play your music or not?

Uli Drechsler: Yes, always. I know that many of my colleagues don’t like to hear that. I see it like this: every form of art has a mission to entertain, the audience wants to be entertained, I realized pretty fast that it’s no longer common for people to go to a concert, an exhibition or a reading nowadays. Nothing is easier than falling asleep on the couch in front of the TV in the evening while watching football. But there are those few who go to a concert in the evening to get to know something new and be inspired. The tightrope walk is not to overwhelm people with too much information and on the other hand to give them a nice evening with a high quality offer. A very subtle balancing act.

Finally, let’s go back to the beginning of Liminal Zone: starting such a big project from scratch is a self-created huge mountain you are standing in front of. How did you experience that?

Uli Drechsler: That’s a good question. I have just written a concept for workshops. My basic attitude towards making music is: I am not a musician for my own sake. I love to do something good for people through music. This has led to a great idealism and the enthusiasm not to rest on the laurels, but to reinvent myself again and again. It was always important for me to pay attention to this: what would I like to tell now? What kind of person am I now? Liminal Zone is a huge thing, I question it every day because it is an incredible organizational effort. But it’s a dream of mine that I have: to create my own musical universe. So it’s really worth it to put all the energy I’m capable of into it.