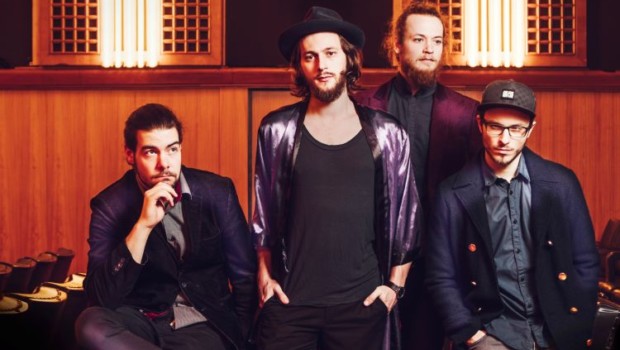 An album, in which jazz is brought to life in its epic format. After the highly praised debut album “Unmasked”, the Austrian-Czech quartet PURPLE IS THE COLOR now presents its second album “Epic” (Session Work Records). The band around the exceptional pianist SIMON RAAB foregoes in their new tuness any reference to a modern sound, rather it follows a timeless approach which results in an immensely atmospheric musical variety. It is a gripping and very individual bridge from the classical to the contemporary that the keyboarder from Linz and his colleagues ŠTĚPÁN FLAGAR (tenor, soprano sax), MARTIN KOCIÁN (bass) and MICHAŁ WIERZGOŃ (drums) are creating. SIMON RAAB talked to Michael Ternai about the making of the album, the constant development of the band and the will to work only with acoustic instruments.

What is immediately noticeable when one listens to the tunes is that you really put a lot of effort into them, that you went into great detail and that you confronted yourselves with the material.

Simon Raab: For the second album, we set ourselves above all the task that everyone composes. On the album there’s at least one tune from each of us. The biggest challenge this time was to find a consensus, because of course each of one us has a strong personality and strong ideas about his own stuff. We really wanted to get involved with each other on this album.

We also decided that this time we would go an epic path together. What’s more, in Andreas Lettner we have added a producer who was very much in the background, but who brought a lot of ideas into the mixing process and took care of the subtleties of the sound.

“The challenge was to choose the right one from all the variations of a piece.”

Compared to your debut, what was your approach this time? How did the new pieces come about?

Simon Raab: We met twice a week for rehearsals in May and June of last year. That was a relatively intensive time. On the one hand there were already concrete ideas which we then played through and recorded. On the other hand, there were also a lot of bits and pieces of ideas. During the summer we then rehearsed over the internet, on an online platform where we uploaded our “Logic Files” and where everybody could do overdubs. But in the end, the idea was more romantic than the actual process which often was very prosaic.

At the end of August we spent a week in the Czech Republic – in the music school of the village where our bass player comes from – and rehearsed from morning till night. Afterwards we were on tour. We had an India tour with ten shows and also three concerts in Austria. Afterwards we went directly to the studio. We actually had a lot of routine from the playing point of view. The challenge was to choose the right one from all the variations of a piece. We always had to decide whether to take the longer or shorter version. It was as if we always came to a crossroads where we had to decide what was better and what was worse.

Your first album was really well received and got good reviews. To what extent did expectations to deliver another top-class album put you under pressure? Or was this thought somehow left out?

Simon Raab: There is something to it. Somehow such a thought has always been in the back of our minds. The first album sold really well. So well, that we even had to re-order CDs. About a thousand copies were sold. I think you can’t completely shut yourself off to certain expectations. They actually automatically flow to a certain degree into the production of the next album. But what was clear to us from the beginning was that we didn’t want to reproduce something that we already had.

“In the end, it was not only the expectations that moved us in this direction, but above all the urgency.”

So with time, routine has showed up too.

Simon Raab: We played a lot together around our last album. I never played so much in such a short time with any other band before. Because of all the playing the tunes have changed a lot. Improvisation is a very strong factor in our music which clearly means that our material is constantly changing. That is also the exciting part about the whole thing. So the idea of the new album – when you think about it – was the logical consequence, from the heart came the urgency. It came to a point that we all wanted to have something new. In the end, it wasn’t just the expectations that moved us in this direction, but above all the urgency. In the two years since the last album something has developed between us and thus in the band. We wanted to record that.

On your new album one can hear that you are giving the tunes all the time they need to develop and take shape. There are the dramatic and epic parts as well as the very calm and reduced ones. Was it your intention to introduce this game of contrasts into your music?

Simon Raab: That’s nice that you say that, because we didn’t consciously set ourselves this task now. I think that Purple is the Color is the name of the game and that this is still in our heads. The blue is the calm and the red “Sturm und Drang”. Last year I had an A levels anniversary meeting where my former class teacher showed me a piece of paper on which we had written down who we were. Among other things we had to state what was most important to us. At that time I wrote that peace and quiet was most important to me. At that time I found that to be rather funny, but today I have to say that I am getting more and more aware of the fact that I already feel a strong urge to search for peace and quiet. I have thought about what peace and quiet actually is or can be. If you only associate peace and quiet with being in the country or by the sea, then it may be true, but then again not quite so true. I can feel peace and quiet even during the rush hour near Wien Mitte, when you’re already hearing so much that you actually don’t hear anything. My quintessence is that one can always feel peace and quiet or return to it. The power lies within peace and quiet. That is increasingly becoming my personal guiding principle.

“With the piano, you need to have the idea in your head before you play it.”

Your music also lives on its very timeless character. In the press release to the album it says that you didn’t necessarily feel the urge to sound modern and contemporary now.

Simon Raab: That’s right, we don’t necessarily orient ourselves towards a modern sound now. It’s clear for us that we only work with acoustic instruments. I was and am involved in various pop projects in which I often play synthesizers. But then I always realize that I’m basically a piano player and that I simply like this instrument the most in terms of sound. It is a very tough instrument. You are very limited. Once the sound has been played, you can’t modulate it like you can with a synthesizer. With the piano you need to have the idea in your head before you play it. So our limitation is that we really remain acoustic. Although, if we’re honest, we already cheated a bit by using overdubs.

So you are trying to dispense with electronic tools almost entirely and go the classical way?

Simon Raab: Our band sound is per se in a constant development, so that every new album is always just a snapshot. In the bands I worked in so far, the production of an album was actually always very professional, you could basically do everything in the studio or afterwards. But the funny thing is that despite the technical possibilities I’m mainly making music from the past, i.e. jazz, which really is not about perfection of the recording, but simply about feeling and expression.

I think the danger nowadays lies in the speed at which everything happens. You can actually produce something very quickly that sounds good or looks good, but there is no intention behind it. I realize myself that I am a very restless and stressed person who quickly forgets that some things take time.

“My biggest mission with this band is to remix anew the academic and the emotional […]“.

In your music the overall sound is clearly in the foreground, the mood that is to be carried by the tunes.

Simon Raab: This time, we definitely wanted to make our intentions and feelings tangible in the tunes. My biggest mission with this band is to mix the academic and the emotional anew, the red and the blue. It is important to me to have a relationship. It’s important to me to lead a band in which you interact and in which personalities play a very important role, not only musical skills.