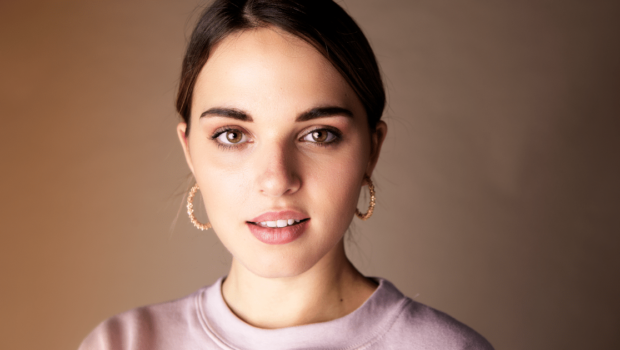 The young singer TINA NADERER is enchanting the Austrian pop scene with her likable and down-to-earth appearance. Her debut album “Ohne Filter” (“Without Filter”) was released at the beginning of June and lets listeners dive into her very personal world of emotions. Never give up and hold on to your dreams. In an interview with Irina Stöckl, the artist spoke about her personal career and her experiences on the German casting show THE VOICE OF GERMANY.

You released your debut album “Ohne Filter” at the beginning of June. Why did you give it this title and what message do you want to convey to your fans with it?

Tina Naderer: I’ve written a lot of songs in the past and they are all about things that really happened to me or to friends who are very close to me. They show exactly how I am, what I want, what I want to say and that I don’t want to be pretending. The album simply shows me as Tina Naderer. That’s how we came up with the title. If you have the opportunity and the circumstances allow it, I think it’s most important to do what you really want to do and what makes you happy. I often think to myself that maybe I should be doing more things that give me some security. But they’re not as fun or fulfilling to me. As long as you’re young and your environment allows you to: go your way even if you fall down. I have stumbled so many times and will stumble many more times. The most important thing is simply to get up again and keep going. It always sounds like a cliché, but you should just do what makes you happy. You only have one life, and it’s no use thinking at 40 that you would have liked to have had a career at 20, but now you’re sitting at home with five children and can’t go to work. I’m sure that fulfills many people too, but if it doesn’t, of course it’s a shame that you didn’t go for the career before.

You describe your album as a kind of autobiography. What was the triggering motive behind it?

Tina Naderer: The separation from my ex-boyfriend was very crucial for the album. That had a big impact on me. Actually I’m not a person who likes to talk about such things. That’s why I prefer to write about it. That was also a reason why the album has turned out to be so sincere. I wanted to tell what has been happening to me over the last three years. All that was of any concern to me, I worked through and wrote down during the sessions. And then the time was already there to put it out, because I’m already further along my road. Some of those songs were written two years ago.

“Bild ohne Filter” (“Picture without a Filter”): What is the song about? Are you describing your world here and how you want to be perceived?

Tina Naderer: Yes, and how I’m actually often perceived and also not at all. Especially as a woman you are often told: “You should wear high heels when you go out. You should be wearing a lot of makeup”. Which is actually insane and not true at all. I do own high heels, but I never wear them. I’m also often told that I come across as very arrogant. In fact, it’s more my insecurity. If you ask my girlfriends and friends, they won’t confirm at all that I am arrogant. On the contrary. With that I wanted to express that all this doesn’t have to be like that. I’m stubborn, but I have tried to look at both sides. On the one hand, how I really am, and on the other hand, how people want me to be, but how I don’t want to be. I don’t want to have to pretend anything in any way for anyone.

“Sonnenallee” (“Sun Avenue”): What was your inspiration for this song?

Tina Naderer: Lightness, actually. You take yourself a little too seriously  at times. The song is about an evening when you’re out with the girls, for example, and you spend a night together until sunrise and just enjoy the moment without thinking about what’s waiting or what has to be done until the next day. You just enjoy the moment. Unfortunately, we are doing that far too scarcely. I always catch myself thinking, “I have this to do in three hours and then this to do, so that it all works out with my other appointments”. Actually, I should take two days sometimes just for myself and enjoy life, to be able to do what I really want and what I enjoy.

How would you describe your music in three words?

Your first single was already released in January 2019. What has happened since then and how would you describe your musical development?

Tina Naderer: Due to Corona, we had to postpone the album twice. It should have come out last fall, then we scheduled it for the beginning of this year, and finally we released it now in June. It just wasn’t the right time because of the circumstances. In the meantime, however, so many new things have happened for me. For example, the song “Wie krass du bist” was written just before the album was supposed to come out in January. Definitely something new will show up in the fall too.

When did you start making music? And why German pop in particular?

Tina Naderer: Music goes back much further for me. I started playing instruments when I was six. Then I slowly started taking singing lessons and singing in a choir when I was eleven. The trigger to make music professionally was actually The Voice of Germany in 2017. Yvonne Catterfeld always made German music, too. I also wrote in German before that. I would never rule out singing in English in five years time, for example, but right now I feel so strongly about German. All these things that I’m experiencing right now, I’m also working through in German. That’s why the need to do the songs in German was more pronounced for me now. But I would say that I’ve already sung two whole shows in German and the feedback was so nice, it just gave me the power to continue to make music in German.

Tina Naderer: That I can continue making music so sincerely. That has always been well received by the fans so far. Maybe that’s what makes me a bit more unique. Otherwise I just want to make a lot of music. Not having to think about whether I can afford it now to make music with a rock sound, or whether all the fans will then say: “Oh God, Tina, what are you doing?” I just want to follow through my line, I want my style to remain just as multi-coloured, and I definitely want to be able to play live quite a lot. On June 10, all the summer concerts will begin, and there are more concerts than expected, which is really cool. Then in the fall there’s the tour. I’m a live musician and I live for that rather than sitting in the studio for 24hours/7days. That’s why I’m hoping to be able to play live again very soon and take advantage of that. I have, thank God, two great booking agencies who know that this is exactly my thing and they can make the best out of the situation. Of course, I’d also like to be able to come up with many new songs next year or so, for the next album. A number one hit would be cool too, but that’s not the most important thing. Just being able to keep doing what I’ve been doing. I think I’ll continue to be true to my style. There won’t be many   changes there.

My mom is, I think, my biggest fan

Tina Naderer: My mom signed me up. I wasn’t able to defend myself at all or to say that much. Then, of course, I was happy to do it. My father said, “Pass your high school graduation and then you can make music”. It was always important to get a certificate, which I also think is good. But they were crazily happy, because there are preliminary rounds before you even get to the “Blind Auditions.” At the “Blind Auditions” you also see how Samu Haber is the first one to press the button and how my company freaks out. That was insanely beautiful. I think my mom is my biggest fan. When my mom first heard the songs on the album, she said, “How can you keep songs like that from me? Now I cried alone at home”.That’s what I wanted. So my parents, girlfriends and friends, of course, were much more aware of what the songs were about than outsiders. By participating, I simply wanted to gain experience. For me, it was more important to get to know people from the industry so that I could continue after the show, rather than being in the finals. Those are just gagging contracts anyway, where you’re tied down for two years and can’t do anything. I would only have gone to The Voice of Germany, I would never do Deutschland sucht den Superstar. It lacks authenticity. Since the show, I’ve already grown a great deal. When I’m watching the shows today, I think to myself, “I seem more insecure than today”. But well, that was four years ago, when I was in my early 20s. Now I’m 24. I’ve been able to learn a lot of new stuff and also gain a bit of self-confidence.

What was the most beautiful moment on The Voice of Germany?

Tina Naderer: Actually, it was more the moments that you didn’t see on TV. The evenings when all the thirty of us in the team and Yvonne Catterfeld too, when she was there, sat together in a room and simply made music. That’s when you realize why you’re there and why you put all your eggs in one basket, as I did.

How did your music and your perspective on the industry change after the show? What were you able to gain from it?

Tina Naderer: I have quite a few colleagues who also took part and who say that it was stupid that I didn’t get on to the next rounds. I think that’s ridiculous. I learned so much there – for example, how to give interviews and how to deal with different interview situations. I learned how to interact with musicians on stage, and also when a lot of people are talking down to you. I was able to gain a lot of organizational experience and make a lot of friends. This allowed me to do what I always wanted to do for at least two weeks at a time. I would never say that being on a casting show was a bad experience. Unless you start thinking: “I have to win this to be famous”. To me, that’s the mistake a lot of people make. I’m not doing this to be a pop star or make a lot of money. Those are the nice side effects that hopefully you’ll get someday. I’m making music because I believe it’s the only thing that’s right for me, and because it really fulfills me.