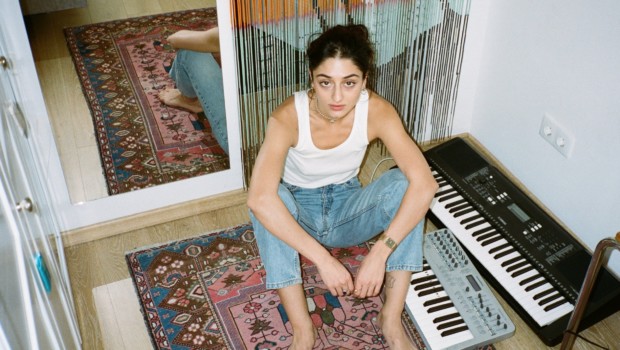 Sofie Fatouretchi is already now considered as one of the up-and-coming acts from Austria this year. Originally she grew up between Vienna and L.A. After several years as part of the founding crew of Boiler Room, DJing, studying, painting, modeling and more, she has finally kicked off her musical solo-project that goes simply by her first name „Sofie“. Her debut-album „Cult Survivor“ (Stones Throw) is a seductive mix of dreamy nostalgic melodies, haunted hushes, a fragile but self confident voice and an extravagant, self-reflecting staging of her persona. Shilla Strelka talks to the artist about current times, how to work successfully in various media, self-staging and the Cult Survivors.

Hi Sofie, how are you? How is it to be stuck in Vienna? I imagine you’re usually more on the road?

Sofie: I’m doing well, thank you. I know that maybe this isn’t wildly obvious, but I am somewhat of a recluse so I’m enjoying not having to travel.

„To have the songs see the light of public day wasn’t something I’d planned on.“

You’ve been active behind the scenes for a long time. You are a founding member of Boiler Room, worked at Stones Throw Records, you are hosting radio shows and are active as a DJ. How difficult was taking the first step with your own music? Often people are much more critical with themselves when they are involved with music on so many levels.

Sofie: It wasn’t necessarily a conscious step. I was a musician first and foremost, before working in the music industry, attended the Konservatorium in Vienna; I’ve been playing the violin since I was a child. That being said, the current form of writing music just happened, I’d hear them in my head and take pleasure in figuring out how to teach them to myself on piano. To have the songs see the light of public day wasn’t something I’d planned on.

Over which period of time did you work on the album?

Sofie: On and off I wrote them throughout the course of a year, but never spending much time on each individual song. The mixing was by far the most intense period of time at once I’d dedicated to record, where I’d spend every day in the studio with Jake Viator (Stones Throw’s engineer, who also mastered the record), and we’d go through the mixes – this is also when I developed the tracklisting for the record.

The sounds on the record come almost exclusively from you? Do the Cult Survivors only exist at your live performances?

Sofie: Yes, production too. There’s a loose formation of the Cult Survivors live band, each city often sees a different constellation of who plays in it – however only one member, my bassist – Christian Hummer, who if you’re in Austria may know from playing keys for the band Wanda, or from his own prowess the lovely band Loewe Loewe, plays additional instrumentation on a few tracks off the record.

You grew up in L.A. and Austria and have moved back to Vienna a few years ago. How does the city and the cultural scene feel in comparison? Do you think Vienna is a good base to kick off a career internationally, or does it no longer matter where you are stationed in our digitalized world?

Sofie: That’s difficult to answer, though with certainty had I not left and worked abroad, I doubt I would be afforded any modicum of the opportunities I have now. That being said, it’s a great place for me to be in now because I can live a very solitary existence.

You have a very overall artistic approach and are quite personal in your work. You play various instruments, sing, DJ, paint, stage yourself. Also fashion plays a role. Is there something like a common denominator of these languages? Something that you are dealing with on various levels, in different media?

Sofie: I think all of it ends up boiling down to self-expression as a means of dealing with existence.

There are some artists who bring these different forms of expression together, but many of them have to decide for one profession at some point. Are you afraid that you might have to make a decision?

Sofie: I would prefer to cross that bridge when I get there. At the moment it’s also the only way I’m able to make a living from art, by pursuing these different disciplines. I’d be broke if I’d only do one.

Are you in active exchange with people from the local music scene or do you have more musical connections to the USA?

Sofie: I definitely, through simply having lived in the US longer than an adult, have more ties to there, in terms of whatever we’d call a scene, or contacts. I don’t have many musical friends in Vienna, no.

You have many years of experience as a DJ, but have you ever played live music? If so, how is it for you to stand on stage and sing compared to DJing?

Sofie: Yes, one, this February in Berlin at Zeit Magazine’s annual fashion week party. The Cult Survivors live band that night was RIP Swirl and Kev Koko, both on guitar. It went well! Of course it’s different, but I ended up not trying to think about it too much.