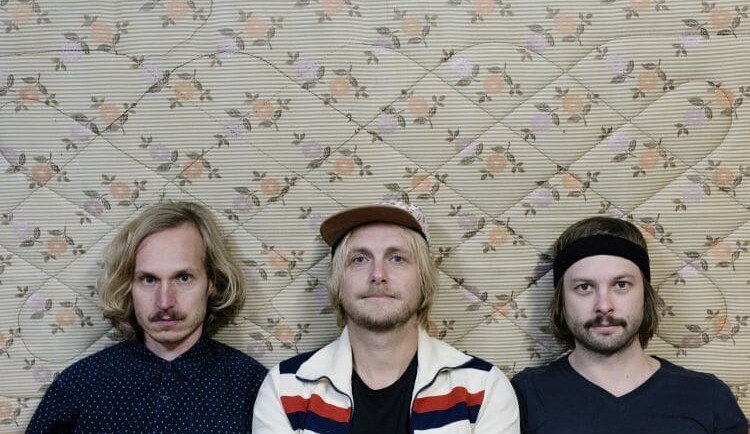 With their new EP “Clouded Sky” (Assim Records) the STEAMING SATELLITES present themselves again as accomplished jugglers of different rock styles. This time the band from Salzburg makes an extra splash and feels clearly comfortable on their musical trips back into the garage. MAX BORCHARDT (guitar, vocals) talked with Didi Neidhart about slimmed down psychedelic sounds, but also Corona.

You describe yourselves the EP “Clouded Sky” as a kind of back-to-the-roots undertaking with more “rough edges”. Where do you think you lost them? Was that maybe also the classic 70s problem of too much time in the studio and too many tracks that want to be played with all the wild ideas going through your head?

Max Borchardt: I think we never quite lost our rough edges, because they are also our driving force for the most part. We just wanted to get back to the garage-band mentality with this EP. It just felt a bit fresher for the moment. But it’s true that in the studio you often lose sight of the essential. There are just so many possibilities to produce songs, to change arrangements and to throw everything overboard again. A good trick is to always go back to the demos. Demos always have rough edges.

But this trimming down and free spinning is also a feature of all tracks. Was that hard or is the playing being reduced to the essentials anyway?

Max Borchardt: It was actually quite easy for us. We briefly considered whether we should re-record everything, because certain parts could have used a little more fine-tuning, but then we decided to go for the emotions and not the maths.

The EP starts with this great “splash” spring reverb sound on “I Never Learn”, but then it goes straight to the point until the song disappears into the room after four compact minutes. Was there a lot of “trimming down” or did it come out as easy as it sounds?

Max Borchardt: “I Never Learn” is the only song on the EP on which we worked together with producer Zebo Adam. But not much was changed on the track. Zebo helped us to catch the energy and the sound and made us aware not to get lost in details. The song was the spark for the EP.

“IN PRINCIPLE HOWEVER, WE DON’T HAVE ANY GENRE-SPECIFIC RULES”

With “Running Out Of Time” and “See You In A Bit”, for which there’s also a very nice video, you also have two songs that sound like classic, straightforward single tracks which would also fit well in such places that used to be called “rock discos”. Is this a path you want to take in the future?

Max Borchardt: I don’t think that we will continue on this path. But in principle there are no genre guidelines or rules. Yet it was a nerve-wracking, interesting trip into the past.

Despite a certain reduction, you still have a rich and surprising sound palette on board. How important are such sounds for you and how long does it take to find those sounds that fit the song but are not predictable?

Max Borchardt: I think certain sounds embody the soul of a song and give it a certain color that is needed to turn an emotion into sound. But we’re always fiddling around with the sound.

“Clouded Sky” starts with a cool blues bass, which reminds one a little bit of Led Zeppelin’s “How Many More Times”, until psychedelic-pop gets the upper hand. On “Still A Mystery”, on the other hand, you come up with a clear Southern Rock/Boogie flavor. Did you also use this EP to experiment within your spectrum?

Max Borchardt: We only did what we felt like doing. There was not much planning involved, but of course experimentation is always part of it. It would be boring to always move in the same grid.

Let’s talk now about the unfortunate subject of Corona. You should have played a few shows around the release – among others at the Rockhouse. How does the current situation affect a band like Steaming Satellites? You can’t necessarily make a living from streamed concerts – not to mention the atmosphere. Or maybe you already have planned something special?

Max Borchardt: At the moment it’s very difficult for us to think about live concerts, because we don’t know when and above all under which conditions this will be possible again. We were able to postpone some concerts to September, but we still don’t know if the shows will take place. Right now it’s important to write new songs and release something as soon as possible. The idea of live streams is certainly very interesting, because you can give the audience or listeners a very intimate picture of yourself and the music. But that will never be able to replace the energy and the exchange with the audience.

Do you have the opportunity to rehearse right now?

Max Borchardt: Until now we haven’t had the opportunity to rehearse together, but that will change in the next weeks.

Have you applied for support?

Max Borchardt: Yes, and we are grateful that there is the possibility. But we found out that it is not one of our strengths to fill out forms, but we fought our way through…

Are you also afraid that the Corona crisis will radically transform the live music scene as we know it?

Max Borchardt: At the moment we don’t know what the future will bring, but certainly a rethinking will take place. I can imagine that in the near future concert goers will have a somewhat queasy feeling of standing in a room with lots of people. Nobody knows what that feels like anymore. But the majority will be glad that something is finally happening again. We are also looking forward to it very much.

Are there any plans for the future from your side at the moment?

Max Borchardt: Phew, I think there are no limits to creativity at the moment. So I’m just curious to see how our music will develop. That’s the only thing that makes sense now, without having to worry about it.