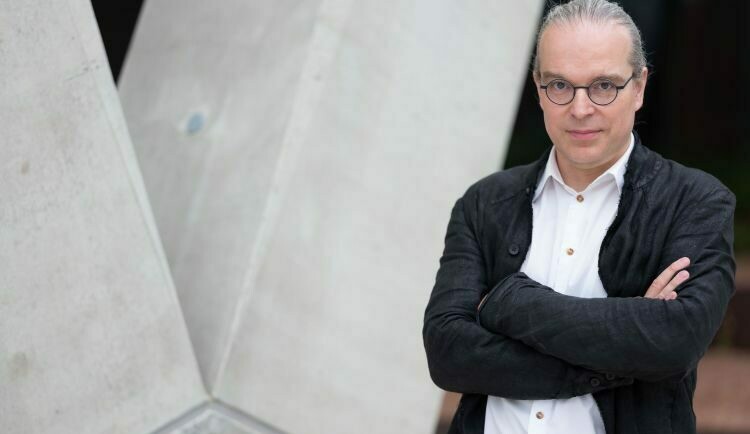 WIEN MODERN, Austria’s largest festival for new music, now in its 34th edition, could be given sub-headers this year like: a major opera premiere at the Odeon, music theatre and dance, performances, multimedia and images, immersive projects, walk-in installations and exhibitions, major concerts in a festival format. In addition, two festivals within the festival: Georg Baselitz & comprovise #3, a fresh look at a pioneer of graphic notation, music for young audiences. Some numbers: 32 festival days, 38 venues, 120 events, 80 world premieres, 30 first performances, works by 60 female composers. Michael Franz Woels met artistic director BERNHARD GÜNTHER in his new office (with moving boxes still lying around) in Lothringerstraße to find out about the really important things in life, about darkness in new music, and dangerous social experiments.

The motto “Just do what you want” seems a bit defiant. Is it meant to provoke?

Bernhard Günther: If you look at the explosively increased density of regulations in the last 20 months, then I can only say: you should do what you want to do much more often! This is actually a serious, somewhat tongue-in-cheek invitation to finally pay more attention to the really important things in life again. It’s time to start thinking about things other than the flashing dos & don’ts and retreating into a snail shell. And of course we at Wien Modern believe that contemporary music and listening to music together are among the really important things.

Friedrich Schiller drew attention to a medical expression while writing about the meaning of theatre: “The pathetic is an inoculation of inevitable fate, whereby it is deprived of its malignity.” What inoculation, what vaccination does the audience experience from new music?

Bernhard Günther: There is this ancient Greek theory of purification, of catharsis, through what happens on stage. I’ll take a very concrete example: At the Odeon we are showing the large co-production of the opera Poppaea, composed by Michael Hersch with a libretto by Stephanie Fleischmann. This opera explores the dark sides of humanity: violence against women, abuse of power, unscrupulous leaders, an all too risky striving for power wanting to stop at nothing. Is it necessary to stage something like this in these difficult times? Perhaps the public wants more of the light-hearted stuff? It was a very conscious decision to say that new music and opera both have a long history of looking at these dark sides. There’s often “darkness” in new music because it’s an art form that’s very close to the present, and the present isn’t only a comedy.

What did you learn from last year’s festival that took place in a state of emergency, from the twenty months of the pandemic? Which changes and innovations have come out of it?

Bernhard Günther: Last year, despite several months of preparation, we were surprised by the dramatic development of things, we reacted by reflex and tried to make the best of it. We presented 60 premieres in a lockdown mode and were able to let the artists work and get paid. We reached over 40,000 people with the streams, yet streaming is no substitute for a live event! In order to be able to better absorb any changes this time, we have provided for the larger auditorium in case of doubt and/or more performances of individual shows. We have learned to play the rules of the game. A year ago, Wien Modern was a pioneer in that we used hundreds of quick tests. Now there are free PCR tests all over Vienna. And it’s precisely the stricter Viennese measures that are currently leading to a situation in Vienna that fortunately looks more stable than in other provinces. We have learned to deal with unpredictable conditions in the best possible way, and at the same time we have strengthened this move towards diversity. In ecology, biodiversity is a survival strategy. In music, I see it the same way: there has to be something else than monoculture, a coexistence of the experimental and the mature. I hope this will become more noticeable with each festival.

Wien Modern is presenting 60 composers this year, and the variety of formats is also taking another step forward. We have eight music theatre premieres, and we have several installations, walks and site-specific spatial productions, such as our large co-production with the Kunsthistorisches Museum: going to a concert becomes a visit to a museum, 70 musicians with instruments from six centuries are spread out in the gallery of paintings for Georg Friedrich Haas’ “ceremony II”. New music can be much more than just the classical format, where everyone sits in a shoebox-shaped room and faces the stage. This is a long-term curatorial strategy of the festival, which in a way is also encouraged by the pandemic.

WE HAVE REACHED A POINT WHERE THE INDEPENDENT SCENE ONLY HAS A CRACK OF THE DOOR THROUGH WHICH SOME LIGHT AND AIR CAN GET IN OR OUT!

Wien Modern finally got an adjustment of the subsidies this year. When I came to Vienna, I was “greeted” with a cut from 700,000 to 650,000 euros. Now, in a decisive move, the city of Vienna has increased the festival’s subsidy to one million euros per year. On the one hand, this is sensational; on the other hand, we are now on a level where we only recovered the losses due to inflation and budget-cuts since the mid-1990s. In 1996, the festival had 44 days of performances (12 more than this year) and a co-production budget that is almost unimaginable today. If you look at the program back then – what the Wiener Konzerthaus alone helped to finance back then would be completely unthinkable of now. We are at a point where I can only hope that the big players in musical life will once again be relieved of more commercial pressure. After much discussion, the BMÖKS (note: the Federal Ministry of Art, Culture, Public Service & Sports) has raised the funding to 200,000 euros this year; when I came to Vienna, it was only 100,000 euros. That is also a big step, but not more than a step in the right direction.

It is extremely important to me that this is not limited to Wien Modern: The public authorities must realise how enormous the backlog is in the perception of music being a public task. For 25 years, there have been decreasing subsidies, from stagnating figures, hit by inflation, to several years of actual cuts in cultural budgets. We have reached a point where the independent scene only has a crack of the door through which very little light and air gets in or out. This is a truly precarious state of affairs that needs to be corrected quite fundamentally. The time of the pandemic should be resolutely used to correct this neoliberal assumption that music is largely supported by the “market”.

What is the current situation regarding access to curating? What changes do you see when you look back at the past or look to the future?

Bernhard Günther: I am not unhappy with “working with restraints,” as restraints are also a source of inspiration. I feel, for example, that this commitment to dialogue is a gain. If you think about to the supposedly golden age of the 1980s and 1990s, when powerful directors could do what suited their personal taste and convictions to a much greater extent than today, then I think it’s an improvement that large productions can only be done today if many partners, artists and institutions support them. Wien Modern only works when many partners throughout the city agree together that they want to do this, that they will participate, that it is for a good cause.

Of course, this is quite an intense curating process with much more work, but at the same time it is absolutely necessary. It needs this opening, these many air holes, to let in something other than the taste, horizon and circle of acquaintances of one person. If there weren’t also many things in this festival that are a surprise for me as well, then I would have done something wrong. I also relate this to the festival theme. You have to get rid of the delusion that everything can be controlled centrally. This happens neither in society nor in art. I love this growing contradictoriness. In many productions of the Wien Modern program, the credits mention who curated it, and there are now many different people and institutions coming together. I think that is essential for a festival of this size.

This year, for example, there will be four days of Quatuor Diotima at the Musikverein with a program co-curated by the painter Georg Baselitz – anything but a music expert, but an extremely passionate listener of radical new music. Immediately afterwards, there are three days of comprovise at the Italian Cultural Institute, curated by Thomas Lehn, Tiziana Bertoncini, Bruno Strobl and Nina Polaschegg from the IGNM, with an international line-up of the improv scene. If these were two independent festivals, there would be little chemical reaction between the two. But both are contemporary music, and Wien Modern provides the bracket that consciously puts all this together and says: “Look over here …” That strengthens the field as a whole. New music, considered on its own, can seem like a jagged field full of little niches. But taken as a whole, it’s an impressive landscape that has now also reached a handsome size, and it’s a pleasure to provide a map for it for a month.

A SOCIETY THAT MOMENTARILY DEEMS ART AND CULTURE SUPERFLUOUS, CHANGES FASTER THAN EXPECTED INTO SOMETHING THAT NO ONE WILL HAVE WANTED IN THE END

Where do you see new music in the context of so-called system relevance? Couldn’t one also say with Claus Peymann that the importance of art not being system-relevant and being a rebel against a possibly wrong, unhealthy system, is precisely what it is all about?

Bernhard Günther: I have stepped back from seeing politics as a cue in the last few months, and I have also given up trying to become a hobby virologist. How did I put it last year during my spontaneous speech at the opening concert? “A society that considers art and culture to be momentarily superfluous, changes faster than expected into something that no one will have wanted in the end.” I think it’s extremely important that we don’t lose sight of what culture can do and what art must do. Attending concerts, theatre and dance performances, museums and cinemas does something to society. Now we had 307 days of shutdown at the Burgtheater. I think that’s a dangerous experiment and we have to come up with a lot of ideas so that no one forgets how good it is not to just sit on one’s couch.

As a last word, what would you like to say in the spirit of “Just do what you want”?

And last but not least, I would like to emphasise that this year’s concert-goers are more than usually invited to do whatever they want. They can lie down with Ingrid Schmoliner, walk around with Georg Friedrich Haas, Peter Jakober and Volkmar Klien or at the final concert of the Wiener Symphoniker conducted by Beat Furrer, they can even take out their mobile phones to receive the electronic feed of the music.