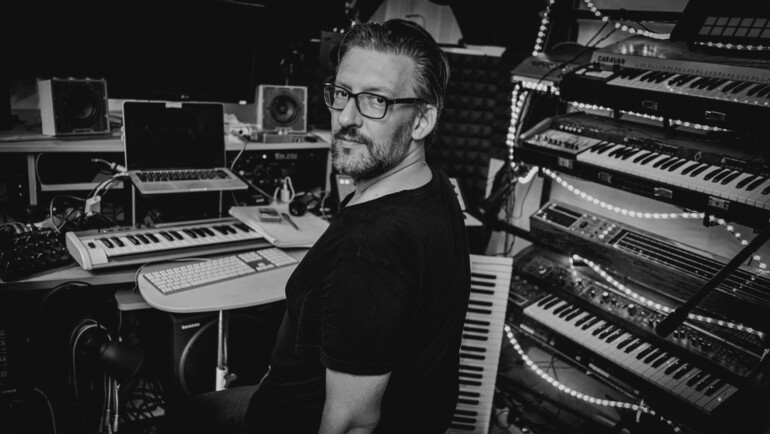 STEFAN DEISENBERGER has been one of the most sought-after producers in the local indie scene for many years and has worked with acts such as VOODOO JÜRGENS, GARISH and SLEPP SLEEP. Clemens Engert spoke with the former NAKED LUNCH keyboardist about the curse of early birth, his aversion to too much “trickery” and chauvinism in the industry.

Until a few years ago, you were a permanent member of Naked Lunch, one of the biggest and best-known local bands. What insights did you take away from that time that help you now in your work as a producer?

Stefan Deisenberger: Basically, only that the song, the arrangement, and the captured mood determine over 90% of the result of a production. The remaining 10% can then be divided into technology, equipment, and other things. That’s why I don’t get into extensive gear discussions anymore. As an equipment nerd, I had to completely rethink this at a certain time, because these 10% are already visually overly present in everyday studio life. It’s easy to lose sight of what’s important – just because there are so many good machines standing around.

As you know, more and more artists are turning to home recording – what do you think of development?

Stefan Deisenberger: I see it very, very positively and I’m also a bit envious myself, I must admit. It’s a bit of the curse of early birth, if you will. Twenty-five years ago, I longed for the opportunity to do everything at home without having to spend a lot of money and without having to sacrifice sound – nowadays, that’s definitely possible. However, one shouldn’t get carried away. It is often said that you don’t really need anything anymore to make good productions or that Billie Eilish recorded her No. 1 hits in her bedroom. That’s silly talk. What is never mentioned is that these artists then go to the big studio for mixing anyway, where the signals recorded at home are pumped through the most expensive machines in the galaxy by the most capable experts in the industry.

Stefan Deisenberger: Classic producers will probably still be needed in areas where artists want to make money – i.e. format radio. There are definitely people who can bring someone into these areas through their know-how – provided that the song material fits. But that’s not my world. For me, as an owner of a recording studio, the work has shifted more towards mixing. Mixing itself, as a service, I don’t think will be so easy to eliminate, because you don’t learn the know-how overnight. It’s a craft and for all crafts the rule is practice, practice, practice. What’s more, it’s a very nasty craft. Whenever you think you’ve become pretty decent, someone comes along and does it much better.

What is your personal approach to working with artists? Do you like to give creative input regarding songwriting and arrangements, or do you primarily act as a sound engineer?

Stefan Deisenberger: I do give input on arrangements, but not on songwriting. I can recognize a good song immediately, but I can’t write one myself, nor can I define more precisely why a song is good. I also have a hard time telling someone that a song is not that good. It’s always a very personal story, there’s a lot of work involved and that can simply hurt. The musical production is, if desired, much more my forte. I can “fiddle around” with the arrangement for hours if something has grabbed my attention. Hooklines always come to me, too. And, of course, the sound aspect is always part of it. But I have to say that I am a declared opponent of too much “trickery”. I want to produce good music and not “fake” better singers. If the vocal take only carries for one phrase, the singer must first and foremost work on it again. I also don’t see the added value here; this technique always seems artificial to me. In summary, a good recording is a well-captured moment where you can feel a mood and the tech doesn’t interfere.

“A producer must be able to tune a snare. That’s the law.”

In your opinion, what are the most important qualities to have as a producer?

Stefan Deisenberger: Tuning the snare. A producer must be able to tune a snare. That’s the law. You also have to be good with the artists on a humane level – it’s best to check that out in the preliminary meeting. The same applies to the music, of course. If you don’t like the band, you should leave it alone – you won’t be able to help them, no matter if you need the money or not. Then, of course, you have to get involved with what the artists have in mind or find out in conversations where it could go and which recording method you choose. This has a direct impact on the costs of a production, and this must be communicated transparently right from the start. It is also very important to develop a feeling for basic moods or tensions in a band. You are a mediator and psychologist to a certain extent – whether you want to be or not.

What are some frustrating moments that come up in the course of working as a producer?

Stefan Deisenberger: When you present an arrangement that you are completely enthusiastic about, and nobody likes it. That happens, but it doesn’t matter. Then it’s a case of simply going back to the start. Then there are sometimes artists who don’t really know what they want exactly. Often you can guess, sometimes, unfortunately, not at all. Now and then it also happens that artists want things that are not feasible or that their self-perception is shattered by objective reality – including mine. Every now and then you have ideas that you can’t implement due to a lack of know-how and/or skill. There’s no way out of that without some ego being briefly bruised. But that is part of the process and no big deal. It is also frustrating when you yourself are stuck and, due to being blinded by routine, no longer know why things could not be much better. A longer break is necessary in these moments.

Does it also happen that you reject collaborations because you can’t relate at all to the respective musical style or the attitude of the artists?

Stefan Deisenberger: Of course. Nobody has anything to gain from me trying to record metal – even though I’m a huge Slayer fan. I’m simply not interested enough in how to stage it well. I’d rather be a consumer. The same goes for all the current musically completely homogenized Instagram pop stars and for Schlager songs – except for the difference that I don’t consume such things myself. But the respective artists smell that anyway and don’t come to me. I feel most comfortable in the indie-pop bubble, which is unfortunately rather small in this country. I also like audio books a lot. Sometimes it’s just pleasant to have something read to you – that’s when you regain some distance from the music production. Breaks are very important for focus.

The producer scene is still predominately male. How do you explain this gender gap?

Stefan Deisenberger: It’s like that in this industry because, unfortunately, it’s the same in almost every field that is technical. That’s the not very glorious truth. I just finished my Covid education sabbatical as a C++ developer. There were only two women in the class there, too. Just now my wife was telling me how disgustingly sexist bullying is in IT, especially in the gamer industry. On the one hand, this is probably due to the fact that relatively few women tend to take up technical disciplines due to incredibly deeply anchored, traditional norms. On the other hand, the male colleagues with simpler minds – and unfortunately there are more than enough of them – will do their bit to keep it that way. The trend towards the reactionary can be observed worldwide at the moment.

Is there any female producer you admire?

Stefan Deisenberger: Yes, Sylvia Massy [note: among others Tool, System Of A Down, Johnny Cash and Red Hot Chili Peppers] is someone I find really good at the moment, even if I can’t often relate to the music she produces. However, she is a real top producer and has a very instructive YouTube channel.

Is there an album where you would say: This is actually perfectly produced and mixed?

Stefan Deisenberger: Oh, there are too many. In the pop genre, I find one production particularly outstanding in recent years, and that was Tame Impala’s “Currents”. That really blew me away, but primarily from a musical point of view. There are once again the 90%, which have nothing to do with technology or sound. That’s where we’re going round in circles: Almost every Schlager record on the shelves of Austrian highway gas stations is perfectly mixed. Does that mean anything? Not to me, anyway. In absolute numbers, however, it’s probably more relevant than all the Tame Impalas in the world put together. Sebastian Kurz is just the objective, hollowed-out reality in which we find ourselves in this country, and the popular Schlager song is his prophet. That all sounds very dystopian now, so here’s something nice: I think Slayer’s “Christ Illusion” couldn’t have been done any better.