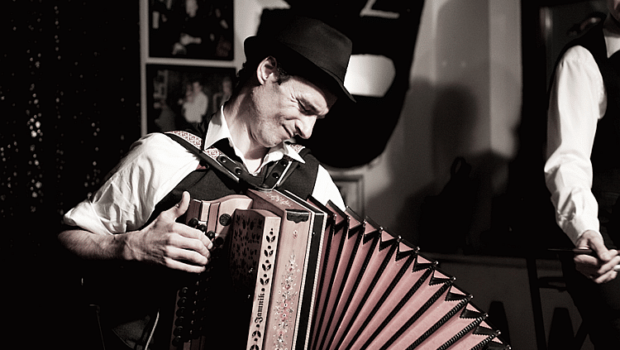 At home in Innsbruck, the musician Herbert Pixner explains what music prizes have to do with McDonalds, how attractive mainstream is for some colleagues, and why you don’t need borders.

Herbert Pixner and his band Herbert Pixner Project make world music with a folk music lineup. This year they have released 2 albums – “Volksmusik” and “Summer”- that couldn’t be more different from each other. Both were produced on the 40 year old’s private label, one of the reasons he is so critical of the Pop and Schlager business. The interview was done by Anna Eisner.

Your band promotes themselves as making “handmade music”. That means music without electronic aids and effects. Is this part of a back-to-basics trend?

Herbert Pixner: I don’t know where it comes from. Maybe the people really want to have something handmade. As an answer to the whole dishonesty of the pop and schlager business, I believe.

You wrote on Facebook: “After I watched the Amadeus Austrian Music Award and the Echo, I am certain that McDonalds will soon receive the Gault-Millau award.” A lot of people agreed with that comment, but it also caused a discussion. What bothers you about these formats?

Herbert Pixner: Nothing bothers me. Everyone should get their award. I just think its bad that these awards are purely sales awards, and the the people say “Oh, they won that award because they had such artistic performances!” That’s complete nonsense. Those who are the better salespeople win. And that has nothing to do with any artistic achievement. If Gabalier and co. have good distribution partners, they win. Eventually McDonalds will win a Gault-Millau award. McDonalds must be the best chef since they sell the most.

Andreas Gabaler won the award in the category “Best Folk-Music”. How to you view his musical accomplishments?

Herbret Pixner: Hats off to him and what his team have achieved. That’s a huge machine behind him and he has to function like a marionette. Musically I find it atrocious. It no longer has anything to do with music. It’s like McDonalds: You can eat it, but I wouldn’t to that every day.

What does quality mean for you? Who do you know if you will be able to identify with your songs?

Herbert Pixner: Actually, it’s always a pretty drawn-out process. You have a piece and you try something out. You play it on stage, and it grows or becomes something new. There have been some pieces that end up completely different, nearly unrecognisable. But that is the beauty of it.

It is hard to pigeonhole your music style. It’s a mix of blues, jazz and world music. But you got your start in folk music, didn’t you?

Herbert Pixner: Yes, three of us did. Manuel, our guitarist, did too, but more from the side of gypsy and flamenco. Now, at the most, we will play folk music for the encore on stage. Everything else is original music. Of course we used to frame our shows with folk music, until we had enough original songs to be able to play complete concerts.

I like folk music quite a bit, grew up with it and associate a lot with it.

Austrian folk music as a concept has something dusty and old-fashioned about it. How do you feel about those stereotypes?

Herbert Pixner: No, I don’t think so. I like folk music quite a bit, grew up with it and associate a lot with it. I just have one problem. When folk music is sold as tourist music, as it so often is. If someone wears a red scarf it’s folk music. That isn’t authentic for me and has nothing to do with folk music.

Sterotypes: You are from South Tyrol. Do you see yourself as an Italian, Austrian or as South Tyrollean?

Herbert Pixner: Actually, as a South Tyrollean. In my passport I am Italian, but I’m not really Italian. Right now I live in Innsbruck, and am a foreigner here. As a South Tyrollean it is always difficult. But I don’t think it is that bad these days. One should view themselves as European. Although these days it is contracting and more walls are being built, which I think is a shame.

Like between your hometown of Meran and Innsbruck, where they are building a border. Do we need borders?

Herbert Pixner: I don’t know. Either I no longer understand or I am just too stupid. I don’t know why anyone these days needs borders. It wont help the whole refugee situation.

Do you see any other alternative?

Herbert Pixner: In a land like Europe, which has too much of everything, I think that a few more people aren’t going to eat us out of house and home. Maybe we could, rather than building walls, try to help locally. First we had the whole “Welcome Refugees!” last summer, and now this. We will have to see. I am curious what is going to happen.

Herbert Pixner: Austria has a really varied music scene, one shouldn’t undervalue that. If you look at Italy or Germany, Austria is really far ahead. If it keeps developing, and there are a few musicians that experiment and create, then I am not worried about the music. I think it is a shame when someone has a little success and immediately drifts into the mainstream. If it is all just about the money, then I think that is a shame! But everyone has to decide for themselves if the artistic performance should yield to the money.