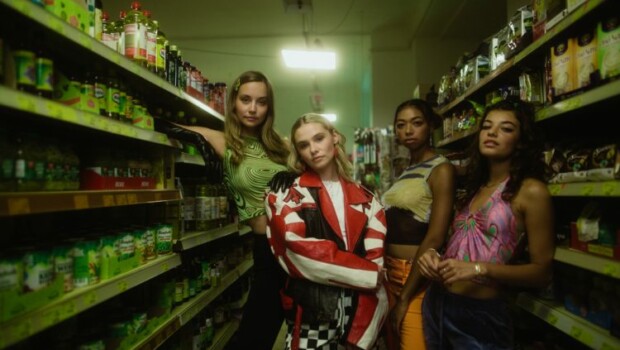 ESTHER GRAF is best known for features with German greats like ALLIGATOAH, FiNCH and OLEXESH. As a solo singer, however, the Austrian born and raised artist is just as successful. Recently, ESTHER GRAF attracted attention in the German-speaking world with her single “Red Flags”. ESTHER GRAF spoke with Itta Francesca Ivellio-Vellin about social media, mental health and authenticity.

Do you currently live in Vienna or Berlin?

Esther Graf: I live in Berlin. I’m originally from Carinthia, went to school in Salzburg and also lived in Vienna for a while. But I have always commuted to Berlin to make music. Musically, I was simply drawn more and more to Berlin, because I had more opportunities there. The career was then also simply a priority. Since the beginning of 2020, I now live exclusively in Berlin.

Best time to get to know a new city – right at the beginning of  corona time!

Esther Graf: [laughs] Yes! But it still paid off. The contacts are still there, and they’re also easier to reach when you’re there yourself.

But you’re also here in Vienna in the studio.

Esther Graf: Exactly. I’ve actually recorded with very few Austrian producers so far. But now I worked in Berlin with an Austrian producer, Johannes Römer, and that worked out so great. That’s also where we recorded my next single “Red Flags”.

You got a lot of media attention in the summer with the feature in the song “Mit dir schlafen” by Alligatoah.

Esther Graf: Totally! I thought that was super nice because the topic of consensus, which is what the song is about, is also very important to me. In rap, you don’t make a lot of statements about a song, you just throw something out there and see how people take it. But for me personally it was important to underline once again what the message is. But I was very positively surprised that most of the people got it right away, anyway. Alligatoah’s fans also understood it immediately, which I’m very happy about. It’s just a very sensitive topic that is being taken apart in all of German rap right now, which is also important.

THE TOPIC OF CONSENSUS IS VERY IMPORTANT TO ME

How did the feature come about?

Esther Graf: Just the way you want it to happen as a newcomer: he just wrote to me. His team saw an acoustic video of mine and he thought my voice was great. I was immediately up for it and wanted to go straight into the studio with him, but at that point there was no song yet. He has to lock himself in his basement to just write and write and write, he explained to me. Then at some point the message came that he had something. He also said that I had to listen to it first and decide if I was comfortable with it. But of course I was immediately excited about it.

But your lyrics don’t usually deal with socio-political issues, do they?

Esther Graf: That’s right. That’s why I actually thought about it for a while, whether I wanted to do it. I really wondered if I wanted to be someone who talked about such things in public. But it’s just a great way to communicate something like that. So I went to Alligatoah’s studio. I had never recorded a song before that I hadn’t written myself. That’s why it was important for me to be able to do my own interpretation, which worked out great.

How did this video come about? Where was it shot?

Esther Graf: On Madeira! Alligatoah was there a few weeks before and had a concept for the video. But then he was hiking there and found this great place and decided to redo the concept. And then I was spontaneously asked if I wanted to come along.

Normally your texts are more about personal experiences.

Esther Graf: Yes, for me it’s almost always about things that simply occupy me or that happen to me. But I do think that social criticism is subliminally present in my work. I would never write a text in which I insinuate myself as a woman. It is important to me to show that I am a self-confident woman. I am not concretely political in the texts, but I am as Esther Graf, as an artist, happy to participate in activist actions.

BUT I DO BELIEVE THAT WITH ME THE SOCIAL CRITICISM IS SUBLIMINALLY PRESENT.

On the other hand, it has to be said that while your lyrics are always about very personal experiences, they are also often very representative of an entire generation – like your song “Geldautomat”. It’s also symbolic for many young people.

Esther Graf: Yes, absolutely. For me, it’s also super socially critical. To question the whole money issue and what do I actually need, what are the things that make me really happy? I think that’s a crisis that everyone goes through at some point. Generation Z in particular is pretty lost, and not just in this context. It’s also in the social media world. On the one hand, it’s about self-actualization and showing who you really are to the outside world. At the same time, the system doesn’t even work that way – that it’s all about the personalities.

How do you deal with it in general? How much can you distance yourself from social media pressure?

Esther Graf: For a long time I lived in the belief that I could distance myself from it better than is actually the case. I don’t have a private Instagram account, only the one I also use as an artist. That’s why it all gets mixed up a bit. For a long time I had no problem comparing myself with others, but you only have to get up on the wrong side of the bed once, or you’re in a difficult emotional phase, and suddenly everyone is more beautiful than you. Then you compare yourself very quickly. It was difficult during the lockdown period, when every person started a new start-up and showed how hard-working he or she was, and with me, nothing worked. So I try to get away from that as much as I can, but it’s just part of everyday life. However, I can’t completely go off of it either. My social media attendant wouldn’t be too thrilled about that either! [laughs]

Ah, you have professional support!

Esther Graf: [laughs] Yes, but primarily during releases. But I’m currently trying very hard to be honest and authentic on social media and to post things that I also like to see myself. I also think it’s nice that mental health is a big topic right now and that you also see that there are fewer filters and more honesty. In my musical environment there is a lot of talk about mental health.

Do you also manage to talk publicly about your mental health?

Esther Graf: I definitely try to do it. I’m also doing it more and more. On my socials, I think I have very oppositional contacts. On the one hand, a lot of women who are feminists follow me, but I also circulate around in the rap scene, and there you also reach other people. It’s also quite funny to see what happens in my DMs. Some people like what I say, and others don’t always like it. For example, when I do a beauty collaboration, because I think it’s cool, rap fans sometimes write me “Ey digga, what are you doing?” [laughs]. Anyway, I’m already trying very hard to just show myself as a real person on socials.

Do you get hate messages?

Esther Graf: Hardly at all. Actually not at all. Of course there will be people who don’t like my music.

…but they don’t dislike it so much that they write to you.

Esther Graf: Exactly. I guess I’m not that controversial. But of course I also get strange messages when I post a bikini photo, because I just feel good in my body and celebrate that. Afterwards, I also thought to myself, “Oh no, maybe I shouldn’t have done that, because now there are people on my profile who are only there because of that”. I’m actually a musician. But then I think to myself that I just wanted to post that, and that’s also okay.

Did those reactions to that bikini post really affect you? I assume they were primarily of a sexual nature?

Esther Graf: Exactly. No, these messages didn’t really affect me. But as I said, I am sometimes afraid of no longer being credible as a musician. I’m a bit ambivalent about that. I’m not in the studio every day, I’m also sometimes with my family in Croatia – I consist of several facets. And I want to show that, too.