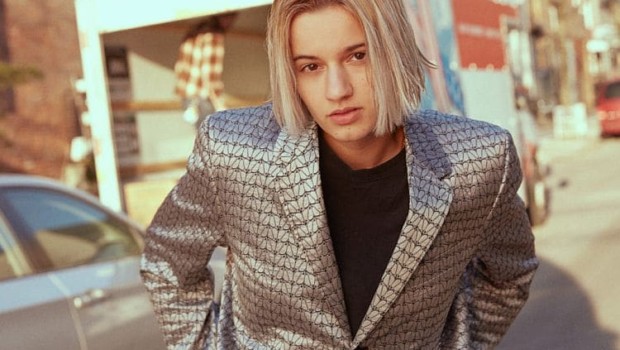 MAVI PHOENIX has become a great hope among newcomers in a very short time. Last year an album was almost finished. With the coming out as a man it was completely reworked.

cheeky boy. cool boy. lost boy. Mavi Phoenix posted three photos on Instagram on July 22, 2019, along with this text. The hair was shorter. Some had already figured out what was happening. Mavi Phoenix was going through a difficult year. Many decisions had to be reconsidered and made anew. Because redefining oneself requires courage in every person’s life. But when you’re in the public eye, when you have a lot of hopes are pinned on you, when the first album is being released and you realize that the gender you’re identified with isn’t right, then it needs more (than courage).
Stefan Niederwieser’s interview with Mavi Phoenix was created as part of a series of the radio Ö1 Lexicon of Austrian pop music, which can be listened to here.

Was it hard to lose 500 followers when you said you lived as a man?

Mavi Phoenix: It really affected me. I cut my hair and since I said that, every day there were less followers. I’m not angry with the people who can’t handle Mavi Phoenix anymore, some of them thought for sure it’s the cool woman who does her own thing and then suddenly this. But it’s 2020 and people don’t know anything about transgender yet. These people are still outsiders in society. There are many reticences, I notice that even with friends with whom I always was buddy-buddy and who are now afraid that they say “she” by mistake, or they say you are probably going through a lot of stuff. It’s kind of wrong. As a trans-person, you have to approach people. It’s hard, but I want to break that down.
“I don’t know if one can imagine that one has such a secret that’s a secret to oneself.”

It’s been and is a long road there, isn’t it?

Mavi Phoenix: I’m still not quite there. A lot of people ask, do you want to have an operation, whereas the most important thing is whether I see myself as a man or a woman. And I have always seen myself as a man, as a boy, always, when I was drunk and alone at a party, I went into the bathroom, looked into the mirror, said you’re a boy, you’re a boy, and went back, that’s what I needed, that was my secret. I don’t know if one can imagine that one has such a secret, which is a secret to oneself, you actually know it, but you don’t dare to go there, because then you have to cope with everything that comes up. And it fits the way it is. Then I’m a cool woman, so what, but that’s no life.

Were there any role models in this situation?

Mavi Phoenix: I generally had a hard time, on the one hand I never oriented myself towards women, my inspirations were rather men, not because I’m sexist, but because as a man I rather compare myself to men.

Did it help you to read stuff online?

Mavi Phoenix: On Youtube people tell their story, I thought, fuck, that’s exactly how I feel. That was important. I don’t know anyone personally who’s trans. In the music world I can only think of Kim Peters. That’s why it’s a bad way, it’s not easy – even if we’re talking about it, that people talk about it now! That‘s just bad.

“It’s about breaking out, being who you are.”

How has this changed your album?

Mavi Phoenix: It’s a very big issue, it’s the issue. With it the album makes sense. It’s about breaking out, being who you are. I even created a character, Boys Toys, to portray the little boy in me, he always comes back in.

How do you use the term bitch?

Mavi Phoenix: Whoa, that’s a really bad question. I’m in such a conflict. I’m a feminist and far be it from me to talk like many rappers, that’s not me, I was raised as a girl and have a strong female side – not that every trans person has that, but I do – I would never talk degradingly about women, because I don’t feel that. But there is another side of me that would like to be a cool guy. I wouldn’t rap that myself, but I hear songs that talk degradingly about women, which sucks, but nobody does anything else. Dude, how does one find really good rap that isn’t like that …

Your voice is often distorted. Why?

Mavi Phoenix: I think I never liked to sound too feminine on songs. I know, now I also sound like a woman, but I always wanted to hide who I am, because I don’t really like myself. It’s totally therapeutic and psychological. But I think these are the same reasons why I never stood up with a guitar.

Are you joking about this issue yourself?

What actually prompted you to release your first EP? You were still in school at the time.

Mavi Phoenix: I don’t know, I wasn’t thinking about it, I believe that’s one of my strengths. I’m usually very much inside my head. But I felt that I have a talent I can trust. You’re one of the few who knows the earliest material. Most say the first Mavi release is the EP with “Aventura”. Before that, I really did everything myself, producing, recording, writing, mixing, and even releasing it as a free download.

How did you teach yourself music?

Mavi Phoenix: In Garageband there were ready-made loops. I put drums, pianos, guitars underneath and got better. When I was 16, I wrote to Simon Herzog on Facebook because he had produced Left Boy and I wasn’t making progress. He gave me lessons, I worked on songs, did everything, he gave inputs. When you hear a song on the radio as a child, you think, there’s magic behind it. But it’s not that difficult (laughs). And then the wheat is separated from the chaff. To do it really well is rather difficult then.

You didn’t have a scene in Linz to connect with.

Mavi Phoenix: Yeah, not at all, I didn’t have a clique. That was OK, I knew I was different (laughs). Only in Vienna I discovered a music scene, that even scared me. My manager linked me up in Linz with Alex The Flipper, he was also alone, he also wanted to get away from hip-hop, to go more into pop and electronics.

Your influences came from the Internet?

Who do you collaborate with?

Mavi Phoenix: Alex The Flipper is everywhere, I trust him and I think he is really cool. On the album I also worked with Nvdes from L.A., Jakob Rabitsch, Thomas Rabitsch’s son, and RIP Swirl aka Luka from Berlin, who co-wrote “Yellow”.

What can a major do that you can’t?

Mavi Phoenix: They have money, they’re a bank. I would’ve signed up, but the deals weren’t good enough. When I sign a deal, my fans know that I have no more money (laughs). We founded LLT 2017, my managers and I, we want to stay independent, a lot of things are done over the internet. I felt comfortable there so quickly that there was no desire to sign up with a major.

Are some of your songs about the world outside?

Mavi Phoenix: I think you can tell that I am a child of this generation, that I am in my 20s. I picked up the vibe of the world, a desolation (laughs), Cloud Rap was very nihilistic and very dadaistic, you don’t know what to do, I that found a total echo in myself. With Fridays For Future you realize again that youth is doing something and it sucks. Also my music moves forward, it is more aggressive and wants something. You stick to the fact that you want a better world. There are even lyrics about climate change where you feel the spirit. Bad stuff is going one in the world and you don’t know where it’s going.