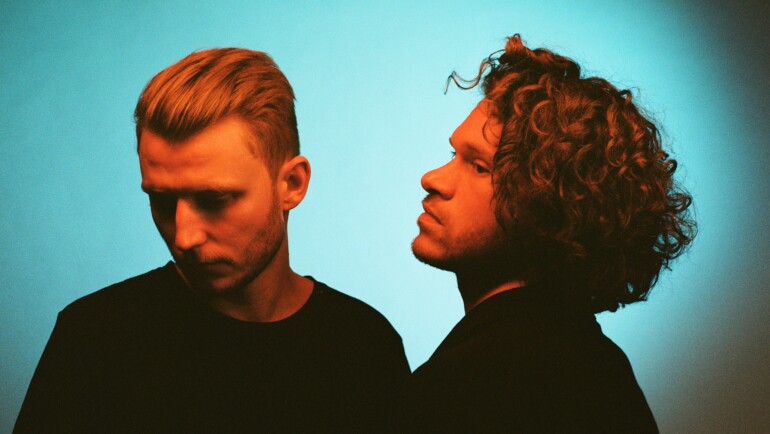 With “Inbetween” (released in early April 2022 on soda. mit himbeer), the band, ANOTHER VISION, founded in 2015, delivers a debut album on which many things come together in a truly exciting way: electronic synth sounds meet analog instruments, loans from the pop of the 1980s meet elements of modern styles, sophisticated rhythm work meets danceability, and a dreamy-melancholic basic tone meets melodies that immediately catch the ear. It is undoubtedly a unique version of pop music that the two masterminds, MORITZ KRISTMANN and MICHAEL SCHMÜCKING, have come up with here. In an interview with Michael Ternai, the duo talks about finding their own sound, about how less is often more, and why pop music is not evil.

Comparing “Inbetween” with your previous releases – the EPs “Stranger” and “Off the Leash” – one can really hear how much you have developed. While in the beginning you still had a strong electronic 1980’s synth-pop vibe, there is very little of that in your new songs. You have really managed to develop your own sound.

Moritz Kristmann: The funny thing is that the 2015 project originally came out of our common idea to get together to work towards DJ sets for clubs. Probably that’s where this strong electronic influence that comes through in our first songs comes from. But as time went by, we realized that this wasn’t really our thing, also because we had both played in bands before and basically appreciate a band constellation very much. And in this direction it has then always developed further. At some point we also added live drums, which changed our sound a bit more. With Patrick Huter, we have a drummer with us who has a very distinctive sound and also really knows how to bring it in. With time, the realization has finally prevailed that despite all the gimmickry, they should ultimately be good songs that, if you wanted to, you could also break down for an acoustic guitar. If the melodies are strong enough, I think the production can go in all directions.

Michael Schmücking: In the beginning we were mainly concerned with acquiring equipment and making it work together. As time went on, it became more and more stuff, until the two of us arrived at our concerts with seven synthesizers. Sometimes we even had more cases with us than all the big bands. [laughs] The sound engineers often flipped us off and asked, ‘What’s wrong with us?’ And just as extensive as our equipment was back then, our songs were also massively overloaded. In every song you heard it tinkling or chirping electronically somewhere. That only changed when we started producing with Mario [note: Fartacek] and Alex [note: Lausch]. They brought us to the realization that it was actually necessary to sort things out and let them stand for themselves. What all this sorting out has also brought about is that now there is simply much more room for small sound investigations.

Moritz Kristmann: With this album, it was the first time that we worked together with producers. And the collaboration opened up a whole new musical world for us.

“MORITZ turnED rather pale WHEN HE SAW WHAT WAS HAPPENING WITH THE SONGS.”

What was the collaboration with the two producers like? What role did they play?

Moritz Kristmann: The workflow basically looks like this: We actually have the numbers quite far when we go into the studio. Then, it’s more about filtering out the best parts and sounds that are necessary for the song and leaving out the things that aren’t really supporting elements. And we really did that for the first time on this album.

Michael Schmücking: I think it’s important that an outsider does that, who is not emotionally attached to any parts, but simply says that this or that simply needs to go now. Moritz turned rather pale when he saw what was happening with the songs. Especially with the number “Heartbeat”, which originally sounded completely different. He was sitting alone in the back corner of the studio, pretty grumpy. [laughs]

Moritz Kristmann: That was the first song we did. And I remember that after I came home from the studio that evening, I shed a little tear and thought to myself, ‘They’re just tearing my song apart.’ But looking back, it was absolutely the right decision.

How do you split things up? Who writes the songs, who is responsible for the sounds?

Michael Schmücking: Moritz is the main songwriter. When the basic concept of a song is set, we work it out together. We look where maybe something is still missing and what could be changed here and there. Whereby I would call this a pre-production phase now. Then it goes to Mario and Alex in the studio, where we finish the songs together.

Moritz Kristmann: Exactly. The actual recording process happens – except for the drums – in my bedroom. We actually record all the synths and guitars there. And it always creates a very unique vibe as such, but it can only form in this one situation and environment. To repeat this in the studio is sometimes really difficult.

Michael Schmücking: The best example of this is the number “Rieger”. This song was actually written at Christmas in the middle of the night in a garden shed. In other words, in a very special atmosphere. And no matter how hard we tried to recreate a certain sample that was created that night, we didn’t succeed. In the end, we fell back on this dirty sample that was created that day in the garden shed.

That sounds as if you were particularly perfectionistically inclined.

Moritz Kristmann: Actually, rock ‘n’ roll. We both played in bands before.

Michael Schmücking: Moritz had a punk band at first. Later he played in a psychedelic rock band. I first had a kind of blues band, but later slipped more and more into house and started to DJ. As we started together, the first “Darkside” album had just come out, which had a big impact on us. As we heard it, we thought, we want to do that too. One artist that had a lot of influence on us was Todd Terje for sure. We wanted to take a lot from that. I think we would never have gotten a synthesizer or turned to electronic music at all if we hadn’t discovered Todd Terje.

Moritz Kristmann: I think we needed these bands to find out what we really wanted to do. If you come from the rock ‘n’ roll corner, pop is always very quickly deemed as “bad”, because it is mainstream. But to admit to yourself that you can and want to do pop, maybe that took a little time.

Nevertheless, I don’t want to take your record as an example of a classic pop record. You have already found your own sound. And this seems to be well received as such. Your singles are played regularly on the radio.

Michael Schmücking: Of course we are mega-happy that this is the case. And we would be disappointed if it would not land on FM4 of course. [laughs]

Moritz Kristmann: When our first single “Head in the Clouds” was played on the radio, I felt it was a really nice moment. Without radio airplay, it’s not necessarily easy to generate attention as a relatively unknown band. And that helps, of course. It’s also nice to get the recognition. Especially in times when live performances are not possible to the same extent as before the pandemic, and you can get the recognition from the audience.

“I NEED A MELANCHOLIC MOOD TO WRITE SONGS.”

Keyword: Pandemic. How did you feel about this, as a band that’s just about to take off?

Michael Schmücking: I think the pandemic was the right moment for us to start with this album production, because we really had time. With a lot of live performances we definitely wouldn’t have been able to work on the record with this intensity. So, as it was, we used this time quite well for us; although the hunger to play is very big by now and we are really looking forward to the upcoming concerts.

Moritz Kristmann: I need a melancholic mood to write songs. At least I have the feeling that it works better then. Especially in the first Lockdown, the ideas just gushed out of me. A lot of songs were written in those months. In addition, Michael also moved back to Innsbruck during this time. When your best friend doesn’t live in the same city anymore, that naturally keeps you busy. But exactly such things let you write more emotionally. From that point of view, the title of the album also lent itself well. “Inbetween” can mean many things. The distance between cities, the phase of life between just finishing university and starting the next stage of life. It’s a very open theme. Everyone can interpret something into it.

What you also manage to do really well is to translate your music into videos? How involved are you in the production?

Michael Schmücking: We work a lot with Gabriel Hyden on the videos. He is a real luminary in his field. Above all, he can make a lot out of very little. We just sit down with him and talk about what we want to have. I lived with Gabriel for a while, so he actually already has very clear ideas about where we want to go.

After the release, you’re actually going on tour right away. You play in Austria, Germany, Czech Republic and Slovakia. How can we picture the live manifestation of your music?

Moritz Kristmann: It took us a little longer to really find our way. We definitely want rock-out with the songs a bit more when live. With us, everybody plays almost everything. We swap instruments a lot, because the songs simply require that. If there are two of us, or three with a drummer, you have to play synth in one song, then bass or guitar in the next.

Michael Schmücking: We had our last rehearsal last week. And for me, the most groundbreaking thing ever happened during that rehearsal. Our drummer Patrick actually comes from the world music corner and has very little to do with our sound. We once asked him to get a drum pad that we could use to fire off our drum samples. But somehow we lost it and since then we can’t find it anymore. At the last rehearsal, he set up two bongos and really got going. I still don’t know how someone can use his legs and arms rhythmically so independently of each other. This element is now being added. And I’m really looking forward to that. Patrick has brought rhythms into our music that we would never have thought of ourselves.

After you finish your current project with the release of your new album and go on tour, will you take a break or will you start again right away? What are you planning?

Michael Schmücking: We were actually already in the studio to record the next tracks. Among other things, we will release a joint song with Pippa in May. A beautiful number, which will be excitingly half German, half English. We are looking forward to it.

Moritz Kristmann: In addition, we are currently working on four songs that will perhaps be released as an EP. And we already have ideas for making an overall concept, which is extremely important. Everything has to fit together nowadays, from the music to the live outfit.