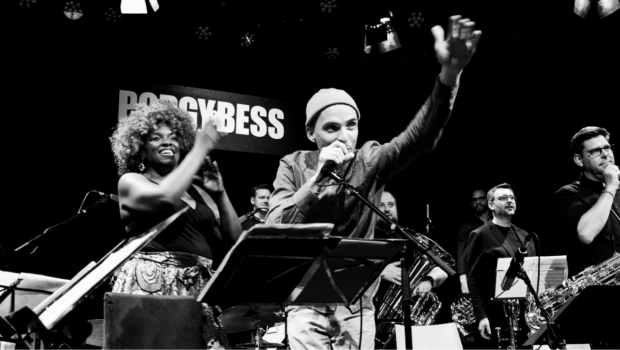 It’s fair to say that the Austrian jazz scene has experienced a real upswing in recent years. At least, one can come to this conclusion when observing the increased international interest in jazz from Austria; and is true across all genres. Following in the footsteps of such legendary greats as Joe Zawinul or Werner Pirchner, a self-confident generation of musicians has emerged, giving free rein to their creativity with their own visions, and successfully playing concert stages throughout Europe and abroad. On the occasion of the INTERNATIONAL JAZZ DAY proclaimed by UNESCO in 2011, which is celebrated annually on April 30th, Michael Ternai takes a look at the current Austrian jazz scene and draws lines to its roots.

What distinguishes the Austrian jazz scene today is the enormous musical breadth it represents. Whether in the more traditional tracks, the large and small ensembles, in the experimental and avant-garde niches, in the free or cross-stylistic fields, a very lively innovative hustle and bustle can be detected in virtually all areas.

The name Vienna Art Orchestra (VAO) is inseparably linked with the history of Austrian jazz. Founded in 1977 by Mathias Rüegg, the big band was considered one of the flagships of the Austrian scene for more than three decades until the orchestra was disbanded in 2010. Internationally extremely successful, the jazz orchestra also served as a springboard for the careers of many musicians. Among others, the two now renowned saxophonists Wolfgang Puschnig and Harry Sokal played in the VAO. Trumpeter Thomas Gansch and double bassist Georg Breinschmid also took their first steps in the legendary jazz ensemble.

But apart from the Vienna Art Orchestra, a large number of other musicians have succeeded in establishing a reputation that extends beyond the country’s borders. Styrian guitarist Wolfgang Muthspiel made his way to the USA. Equally active in the international arena were the Burgenland trumpeter and free jazz player Franz Hautzinger, the Styrian jazz organist Raphael Wressnig, the saxophonist and clarinetist Ulrich Drechsler, the saxophonists Max Nagl and Herwig Gradischnig, the guitarist Martin Philadelphy, the trumpeter Lorenz Raab, whose many projects have taken them back and forth between Austria, Africa and New York, Africa and New York, the Styrian improvisation artist Mia Zabelka, who enjoys an excellent international reputation, and the composer and double bassist Gina Schwarz, who has also been a promoter of the young scene for many years. In Graz, the two Jazz Big Band Graz founders Heinrich von Kalnein and Horst Michael Schaffer succeeded in forming a lively scene that has established itself as a contact point and platform for musicians from all directions and countries.

The Jazzwerkstatt Wien – founded in 2004 by Clemens Wenger, Clemens Salesny, Wolfgang Schiftner, Daniel Riegler, Bernd Satzinger and Peter Rom – has also played a major role in the further dynamic development of the domestic jazz scene in the recent past and present. The six musicians shared the opinion that at that time there were simply too few opportunities for the young local jazz scene in Vienna to draw attention to itself, and therefore joined forces to change that. Together they founded the Jazzwerkstatt Wien association with a label of the same name. What those involved had in mind at the time was the creation of a platform that would serve as a contact point for the young scene and offer it the opportunity to present itself and network. What was once a small group of six people has grown into an important musical institution that now has an impact far beyond Vienna’s musical life. In this context, the many labels and platforms such as Freifeld, Session Work Records, Alessa Records, Jazzwerkstatt Graz, TonArt Tirol, Listen Closely, Laub Records, Fraufeld and arooo.records, which in turn have contributed a great deal to the vibrancy of the scene, should not go unmentioned.

What is special about all those mentioned, and not mentioned, is that musically they have all developed their own distinctive expression, one that does not stop at the boundaries of jazz, but opens up to a plethora of other genres, in manifold ways. There are various reasons for the immense musical dynamism and high quality that the Austrian jazz scene represents. The various music universities, where a large number of musicians graduate year after year, certainly play a major role. There are also various support programs, such as NASOM – New Austrian Sound of Music or the Focus Acts program of Austrian Music Export, which support promising acts on their way to internationality.

And then there are the clubs that provide a stage for local jazz and all its representatives and create publicity, such as: the Viennese jazz institution Porgy & Bess, the Theater am Spittelberg, the Sargfabrik and the ZWE (also in Vienna), the Jazzit in Salzburg, the Nexus in Saalfelden, the Treibhaus in Innsbruck, the Stockwerk in Graz, the Spielboden in Dornbirn, the Villa For Forrest in Klagenfurt, the Bühne im Hof in St. Pölten and the Alte Schlachthof in Wels. Festivals such as the Saalfelden Jazz Festival, the Vienna Jazz Festival, the Kick Jazz Festival, the Ulrichsberger Kaleidophon, the Salzburg Jazz & The City, the Unlimited Festival in Wels or Confrontations in Nickelsdorf also contribute a great deal to the visibility of Austrian jazz – when it is not pandemic season, that is.

International Jazz Day brings together communities, schools, artists, historians, academics and jazz enthusiasts around the world. It celebrates jazz, its roots and its future, and raises awareness of the need for intercultural dialogue, mutual understanding and international cooperation.

Each year on April 30th, the international art form is recognized for promoting peace, diversity of cultural expression and respect for human rights. Jazz opens doors to combat discrimination, support free expression, and strengthen gender equality and the role of youth in achieving social change.