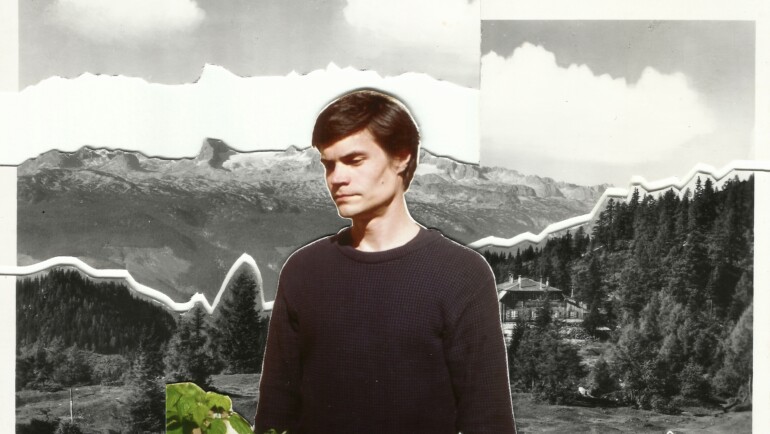 LUKAS LAUERMANN is disintegrating. At least the cello of the 37-year-old composer is under suspicion of sublimation. On “Interploitation”, which will be released on November 18, 2022 on the Viennese label COL LEGNO, LAUERMANN gives up the bass violin. Why LAUERMANN still has to lug a lot around, and why clicks on Spotify are not ‘everything’, he explains in an interview with Christoph Benkeser.

“Silence is a state, you can only approach,” you said in our last conversation two years ago. Listening to your new album, the sentence resonates differently.

Lukas Lauermann: The sentence is still valid – also for “Interploitation”. But, by my standards, the album has become louder, also because the process of making it has changed completely compared to the previous one. I worked exclusively with existing recordings of the cello – a logical development for me, because I wanted to play only with the electronic effect pedals and thus continue what began on the last album, by processing piano pieces. The cello was only a bridge to get into the electronics.

You announced it: your cello will disintegrate. Now it has happened.

Lukas Lauermann: On the last album it was partly just a resonance chamber. Now I didn’t attack it at all in the creation process, but used samples. I deliberately obtained them from recordings made for the documentary film “Alpenland” by Robert Schabus.

Lukas Lauermann: One aspect of the film is human intervention in nature. The decision to intervene in my fragments recorded for this purpose and to change them, and to see what can result, was therefore conclusive for me in terms of content. In the work on the album, I was looking for an equivalent for this in a certain way. It was an experimentation with the sound. I didn’t follow a specific goal, I let myself be guided by the predominantly static recordings and the exploration of the technical possibilities.

Speaking of static. You not only dissolved the cello, but also the dynamics in your playing for the album.

Lukas Lauermann: There is no more playing with the instrument, only with the material. On “Interploitation” you hear clearly defined pieces that are self-contained. With previous releases, I’ve always tried to build networks and build bridges. This time it’s completely different. I often just took single notes from my recordings, digitally processed them and looped them through different effects. Even for the piece where you can still make out the cello, I didn’t re-record anything, but dissected tracks from the film recordings and put them together differently.

In the title “Interploitation,” different words collide: it’s about superimposition, intrusion and exploitation.

Lukas Lauermann: You can also put it more drastically: Musically it’s the gutting of something that already exists. The album title, and also the titles of the individual tracks, reflect my approach. I intervene in words, cut them up and put them together differently. But they also outline the question on the album. As in, “exploitation” – does it exist when we think about the environment? Any exploitation is accompanied by damage to us, because we not only live on the earth, but also from it. By prefixing “inter” instead of “ex”, I have therefore tried to add a twist to the thought. After all, artistic creation always means: intervening in the stock. Our doing goes hand in hand with taking. The question is: how can we take without harming? Or how much? And when does interference become exploitation, and where is it intervention?

What is the need behind the decision to dissolve the cello?

Lukas Lauermann: I see the next step as the fusion of both approaches – the “real” playing of the cello and the processing of its dissolution. That is, the traditional and still deeply rooted notion of its sonority. At the moment I’m concentrating on the electronic side, I’ve come to grips with the equipment and learned how to use it. Otherwise the sound cannot be controlled. In the meantime I realize: there are new possibilities and abilities that I want to combine. So the cello doesn’t stay put.

Although that would probably be better for your back!

Lukas Lauermann: Ha! I sit up straighter than ever when I play the cello! That’s what I was trained to do right from the start. The lugging around could become a problem – not because of the cello, but because of all the electronic equipment. I didn’t exactly downsize my setup, after all.

“I CAN’T AND DON’T WANT TO CAPTURE THE CURRENT EVENTS WITH BEAUTIFUL CELLO MELODIES.”

By doing this, you break with expectation, at least on the album. The harmony of the predecessor has turned into a deep listening experience.

Lukas Lauermann: Because I can’t do much with neo-classical music anymore. This sound aesthetic is currently too repetitive, already seems very trite to me. I can’t and don’t want to capture the current events with beautiful cello melodies.

Young people also got to know concert halls because of neo-classical music. So now that they are there, you can move on, you think?

Lukas Lauermann: Yes, everything else would be the same, same, but different. Even if I notice that there is currently a need for …

Lukas Lauermann: Well, for a distraction! The current situation is overwhelming. We turn on the news, hear about war and crises. That’s a burden for many people. That’s why I can understand that – if you’re already going somewhere, you want a nice evening.

You don’t want to give additional offense, but embrace it musically …

Maybe there is no need for depth at all at the moment, but for moments of a short-lived euphoria.

Lukas Lauermann: But that’s not sustainable at all, is it?

On the contrary: It is the complete consumption …

Lukas Lauermann: Which leads to self-deception, because you can never hold on to the euphoria for long, can you? So you have to keep looking for euphoric moments that diminish over time – like with drugs, which at some point you don’t ride anymore because you’ve developed a tolerance.

Perhaps the break – which could be bigger, in your case, than putting down the cello – is the most radical thing that can be held up against this tolerance?

Lukas Lauermann: For me it is. But I don’t claim that the album as such is more radical than anything else ever made. Certainly not by a long shot. It just points out that changes are needed. I can then try them out, in and with the music, how they feel.

How do they feel?

Lukas Lauermann: Good, actually! Ultimately, trying things out as part of art can be more radical than in other fields. That’s essential. You don’t have to serve the audience, and you don’t have to make music into another business model that keeps itself going, only because it serves needs that it creates. The low occupancy rates in some theaters, and at concerts, is also related to this, I think. Many people don’t want this pure marketing anymore, but …

The search for a real experience?

Lukas Lauermann: Maybe it’s just a hope I’m clinging to, but yes. Recently, I saw an ad for a flip phone. You hear a violin in the background, see the musician playing in front of the cell phone, in the analog environment of the Supersense space, in the old Dogenhof Café (in Vienna), showing how this total staging of a supposedly real world presents itself in the virtual one. That’s really weird.

Lukas Lauermann: Yes, you create a reel, have a huge reach with your first one, and then the first email: “Would you like to promote your posts?” If you don’t pay for it, you’ll never reach the click numbers again. This has nothing to do with the quality of the content, but everything to do with the willingness to pay money to these companies. Or look at Spotify and other streaming providers. Their model is designed so that nothing stands out, because there should be no irritation. Playlists stage something that doesn’t exist and isn’t desirable. That’s why I’m thinking about how to get out of this in a good way.

What solutions do you offer?

Lukas Lauermann: Solutions can only be collaborative steps. At most, I have a personal approach to it, which I often struggle with. After all, I’m still involved in it. But I think to myself: Spotify is the wrong platform for the niches I play in anyway. Of course, you’re happy when your own song ends up on a playlist and suddenly 50,000 people are listening to your music. But the machine only works when you collect millions of clicks. And even then, it works primarily for the company and not for the artists. The fact that they still manage to convince you that it’s absolutely necessary to be on Spotify is interesting and problematic at the same time.

But you’re speaking as an independent solo musician.

Lukas Lauermann: You think I don’t have to deal with that because nobody forces me to use such platforms. That’s true. It’s hard to imagine life without these tools, and somehow I think you can use them well …

How can they be used well?

Lukas Lauermann: There is no general answer to this question. After all, the different channels have very different orientations. But it enables visibility that many could never get via traditional media.

That suggests that it’s no longer possible without activity on the socials.

Lukas Lauermann: That’s how everyone measures success. That’s the problem. I can think of very few counter-examples. It would have to be shown that for the vast majority of musicians, click numbers go hand in hand neither with familiarity nor with the willingness to buy their music. 50,000 people may listen to your music on Spotify. But nobody comes to Baden for a concert just because of that.

That’s why we’re about to point out when and where you can be heard, in person. Thanks for the interview!