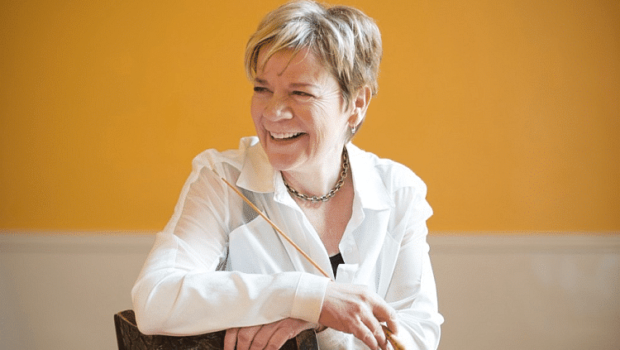 MARIN ALSOP never gave up her imperturbable belief in her dream to be a conductor, so she broke rules and interdictions in order to give female artists today more options and opportunities. MARIN ALSOP is also an exceptionally gifted violinist: she leads „OrchKids“ for underprivileged children in Baltimore and started the Taki Concordia Conducting Fellowship for female conductors. But she made history as the first female conductor of the Baltimore Symphony Orchestra. Sylvia Wendrock spoke with conducting doyenne MARIN ALSOP on the occasion of her new tenure as Chief Conductor of the ORF Vienna Radio Symphony Orchestra.

„MUSIC IS A GREAT EQUALIZER“

The opening concert features „Sancta Susanna“, a one-act-play by Paul Hindemith. Your device was: „minimal staging“. Do you want to adorn the music in concerts, to figure out more than the sound?

Marin Alsop: No, it’s only the orchestra on stage with the cast. We don’t have a lot of room for sets and other decoration/props. But the piece doesn’t really need it anyway!

In „Sancta Susanna“only women act on stage – is it coincidence?

Marin Alsop: There is of course a message that we, as conductors, underly our programme with. It seems appropriate to program a piece that is not known that well. It deals with some questions especially pertinent today about women in the church, about repression, oppression, equality, perception of femininity and female sexuality. These are important questions to address.

“Classical music is a microcosm of a bigger world.”

What is there to say about femininity in the actual context of leadership in music?

Marin Alsop: I am relieved after so many decades it seems to be changing a little bit, but I think only time will tell whether the changes are systemic and intentional, part of people’s motivation, or whether they change now simply because they have to change. Maybe it doesn’t matter. But I do think that we have a better situation now certainly than in the decades when I was kind of beginning in a leadership role. But also I think it’s an important time to be vigilant about creating opportunities for women and for underrepresented people in general – classical music is a microcosm of a bigger world.

Do you see differences between U.S.A and Austria?

Marin Alsop: You know, I’ve been here two days! The feeling I have coming here is a feeling of great warmth and enthusiasm. My experience so far is very welcoming, with people saying things like: it’s time! People are very receptive and supportive and I like this very much.

And the Vienna RSO? What convinced you to lead it?

Marin Alsop: The mission of the Orchestra to be innovative and to perform a wide range of repertoire really suits me. That’s the kind of musician I am and I love working with the Orchestra because they are quick, versatile and flexible. So I think we share that interest in a broad range of music.

“It’s very important to me to be part of the music of our time, now especially here in Austria.”

So the tasks in the collaboration are obviously clear?

Marin Alsop: Well, we have the programme done for the next couple of years and we have a big recording plan with NAXOS records, because that’s my record label. So we will record everything from Hindemith to Schumann and Henze. The programme is very demanding, broad and inclusive with quite a few pieces by women composers, which is very important to me. There is a new piece in my opening concert by Lera Auerbach and when we open Wien Modern there are two pieces: one by Italian Clara Iannotta and another by Polish composer Agata Zubel who I am introducing to the orchestra. It’s very important to me to be part of the music of our time, now especially here in Austria.  I have already met Olga Neuwirth, for example, we spoke about a new project! I imagine the more I am here the more composers I will meet.

You emphasize the impact of music crossing borders of classes, equal if male or female, old or young, rich or poor …

Marin Alsop: Sure, music is a great equalizer because everyone can express their innermost feelings without opinion and it transcends language and politics, which is very important these days. When I see kids in the programmes I work in, expressing themselves, standing up and feeling good about themselves, music can do that. Playing an instrument brings so much richness to people’s lives! This is what makes me happy.

What is there to tell in the masterclasses for female conductors, what is special for women as conductors?

Marin Alsop: There are certain issues I have experienced that are important to talk about and I speak about these to my male students as well: Society interprets gestures differently when it comes from a woman or when it comes from a man. So women in those positions have to be aware of how they’re perceived. There is an immediate rush to assume that a woman is weak. There is a rush to assume that she is too strong, overly strong, overly aggressive. And when a man is that way, he is just strong. When he is gentle, he is sensitive, a woman is … you know … „weak“. It’s part of the way our society is, it’s just life. I mean, I do it too, so I know it exists. So these are issues that we will talk about and when it’s just women in the masterclasses we have a little more freedom to focus on these things. I started the fellowship in 2002 for women conductors, so I have spent many years with talented young women. Five of the conductors in the Vienna RSO’s subscription series will be from this fellowship. They are coming to join and that will be nice for me!

This difference between men and women – is it something difficult? Or enriching?

Marin Alsop: I am a huge embracer of diversity. It makes music and arts in general stronger and richer and more interesting. Some people are frightened by it but it’s time to embrace diversity.

With many thanks for this interview!

US conductor Marin Alsop (* 1956) is Music Director of the São Paulo State Symphony Orchestra and the Baltimore Symphony Orchestra, and Chief Conductor Designate of the Vienna Radio Symphony Orchestra. She is the founder of the Taki Concordia Conducting Fellowship, which aims to foster talented young women conductors with active mentorship. She is supporting a campaign by film maker James Bartolomeo to make a documentary short about the BSO OrchKids (an education initiative that provides music education instruments and mentorship to more than a thousand kids in Baltimore).