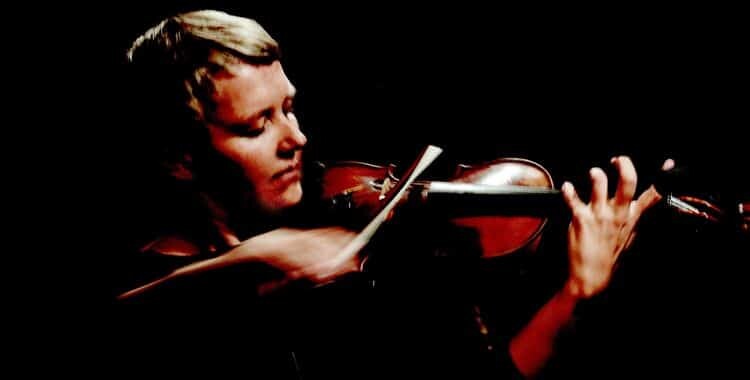 Mia Zabelka is without a doubt one of the most versatile, diverse and innovative musicians of this country. The violinist and improvising sound artist and inventor of “automatic playing” – who was awarded this year by the Austrian Federal Ministry with the “Outstanding Artist Award 2015” for her cultural initiative “Klanghaus Untergreith” – spoke with Michael Ternai about her musical socialization, her love of improvisation and the need to pave her own musical path beyond Austrian borders.

You are a musician, composer and event organizer. You travel a lot and play many concerts. How do you manage all of this? What is your drive?

Mia Zabelka: Over time I have just become a workaholic. I think this kind of development is normal. The more you do, the more labor-intensive and extensive your projects get. But I like it. At the same time I feel as if the work is a necessity. The amount of organizers and events is decreasing, and of course this then requires more initiative from the artists. Particularly in the field of experimental music, which – if you do nothing about it – is in danger of eventually disappearing.

How big, in your opinion, is the risk of experimental music actually disappearing?

Mia Zabelka: At the moment quite big. The responsibility not only lies with the artists and event organizers, but also with the audience. I regularly perform in Eastern Europe, in Poland, Serbia, Croatia. There, three to four hundred people come to a concert. This is perhaps because in those countries the organizers and promoters put a lot more effort into advertising. Here in Austria it is more difficult. To a certain extent, this is due to the fact that there are now many major events with free entrance. When people then suddenly have to pay for a smaller event, they often do not understand why. Especially for events that feature so-called “difficult music”.

What fascinates you about experimental music, about improvisation? What are the reasons for choosing this musical field?

Mia Zabelka: The answer is simple, I am a curious person and I love exploring. I’m interested in the exploration of new sounds, the development of new playing possibilities and techniques. I also believe that you can not learn improvisation. You are either an “improvised being” or you are not. The advantage of improvised music is that you can literally go anywhere and will always meet someone with whom you can spontaneously play a concert. The exciting thing about it is that every musician has a different background and a different approach. Each scene varies from the other. The scene in Amsterdam is different to the scene in London or Paris. So you can always learn something new and take something with you.

Mia Zabelka: That’s actually a pretty funny story. I invited her in 2009 to the first phonofemme festival, which I curated. At the soundcheck of Zahra Mani and myself, she suddenly stood in the concert hall and listened to us. After we were done, she came up to us and said: “I really like that sound!” That was kind of the birth of our collaboration. In the meantime we have developed a real friendship. Beyond that, it’s just a lot of fun to be with her on tour.

Mia Zabelka: It’s basically a win-win situation. Lydia’s background is post-punk music, so for her the work on a “live radio play” is completely new and probably quite inspiring, and the same can be said for us – Zahra Mani and me – working with such an outstanding spoken-word-performer. It’s like “the new Schubert Lied”. We add sound to her texts in real time and she in return reacts with her voice on our gloomy and complex soundscapes. In addition, the performance quality is very high and we really have a lot of fun with each other on stage. This also rubs off on the audience. 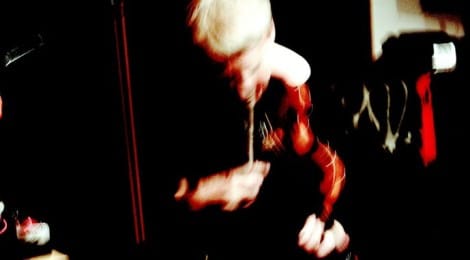 Apart from Medusa’s Bed – which projects do you find most exciting?

Mia Zabelka: I love to perform solo. There are musicians that do not like it at all. I like this kind of being at the mercy of things. I enjoy performing an hour alone, and being responsible for everything yourself. Especially if you play acoustically and not electronically. It is figuratively like being naked on stage. You can’t really fake anything.

Over the years you have developed your very own playing technique – “automatic playing”. How did it happen, what is your musical socialization?

Mia Zabelka: I’ve been socialized through classical music. And I’m lucky that I always had teachers who were musically very open and who motivated me to also stay open myself. My first violin teacher, for example, introduced me to Gypsy music. Although he was a member of the Vienna Philharmonic Orchestra and due to his profession fully involved in classical music, he always also played Gypsy music. This openness was and is very important for me. I am simply fascinated in exploring other music styles and playing forms. Eventually – I think at the age of 14, 15 – I began to play in various jazz rock bands. And these jazz rock bands then led me to electro-acoustic music and then finally to improvisation.

This year in September you were invited to perform at the Incubate Festival in the Netherlands. What were your impressions?

Mia Zabelka: I definitely would like to see such a festival in Vienna. The Incubate Festival is really different. It is totally open to all kinds of musical directions and offers an enormous range. But not only that. I spoke to a few people that told me they were going to attend almost all concerts, no matter what music was going to be played there, whether pop, jazz or contemporary music. The audience is just very interested and also looking for something new. My performance, for example, was before a concert of an American punk band. The band members came up to me after my concert and said: “You really rocked.”

There is a lot going on in the Austrian improv scene. In your experience, to what extent are the creative ongoings being perceived in this country?

Mia Zabelka: I don’t really think there is a lot being perceived. Musicians from the Anglo-American countries are still more recognized. Or also from the Norwegian scene, which I myself find outstanding. Really great people there. Making a name in Austria and beyond its borders is just a little more difficult. Already alone because of the country’s history and its political past. I get asked about this everywhere. I hope this will change a bit in the future.

But still more and more musicians are finding their way beyond Austrian borders.

Mia Zabelka: And that’s a good thing. It is important to reach out internationally and make contacts. The scene in Austria is just too small.

You yourself are successfully leading by example. You were in …

Mia Zabelka: … Berlin, Cologne, New York. And I went there, because there was not a lot happening here, and I hoped to get more going on there. Which happened. Nowadays, this has indeed changed and fortunately there are also a lot of exciting things happening in Austria.

This year you received the “Outstanding Artist Award 2015” for your cultural initiative “Klanghaus Untergreith”. A reward for a lot of work?

Mia Zabelka: Yes, indeed. It was a really long and intensive period of development work. We literally had to start from scratch, establish a new audience, etc. – all of this in the middle of Southern Styria. But now this “global village” concept is running very well. Artists love to perform here and the audience is continously growing. The jury of the award especially underlined the high international artistic quality in combination with the regional significance.

Thank you for the interview.