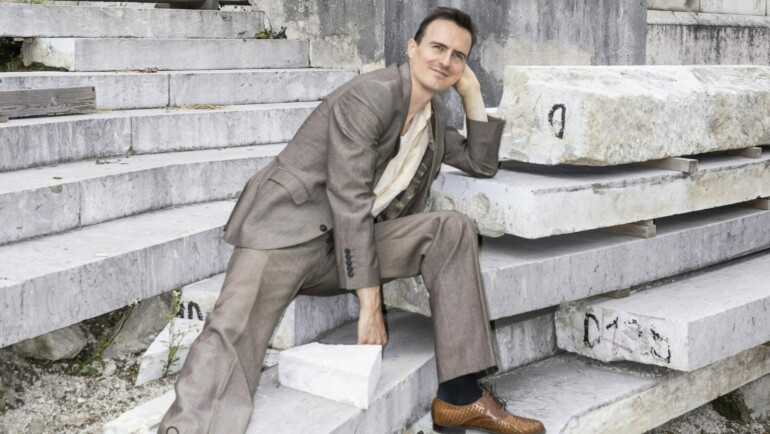 Four years after his debut “The Material”, the sought-after producer, musician and songwriter CLEMENS BACHER aka CID RIM now returns with the album “Songs of Vienna” (Lucky Me). Musically, the native Viennese – who nowadays commutes between his hometown, London and Los Angeles – picks up where he left off on his debut with his danceable mix of electronic, jazz and pop, although this time he has nevertheless laid things out a bit differently, and moved a bit more in the direction of pop. In an interview with Michael Ternai, CLEMENS BACHER talked about why he took a second run at making this album, the crucial role synthesizers played, and his approach to songwriting.

Your work for “Songs of Vienna” began, according to the press release, in 2019 with sessions you played with musician friends. But then you decided to approach the whole thing in a new and different way. Why did this decision come about?

Clemens Bacher: I know a lot of musicians, including many from the JazzWerkstatt Wien environment. And I can consider myself really lucky that many of them are also always very motivated when I ask them if they want to do something with me. The idea was that I would play free sessions with some of these people in Sixtus Preiss‘ studio, and that the material that came out of these would form the foundation of the album, so to speak, which I could then continue to work with.

On the one hand, that really suited me, but on the other, it crystallized for me relatively quickly that if I continued in this way, a real 1970s fusion jazz rock album would come out. And that wasn’t really what I wanted. I already had some tracks on my last album -material, that went in a similar direction. They were a little more complicated and there was a lot happening in them. I wanted to get away from that. Therefore, I then basically discarded the album. Of course, I didn’t let anything get lost. For example, I made two new numbers out of some of the material [note: “Gathering I” and “Gathering II”], which came out last June.

When did it finally crystallize in which direction you wanted to work?

Clemens Bacher: It really clicked for me in 2019. At that time, I was in Los Angeles three times to participate in writing camps, among other things. And I kept ending up in studios where there were synths that I knew little or not at all. Expensive old stuff that you can’t get to that quickly. Sometimes it just happened that I had some time after the sessions to check out these synths and record some sketches. That’s how I came up with ideas that were much simpler. Ultimately, the concept for the album evolved unplanned from that, which was to just get the most out of those studios for me. It always came to intimate sessions with me and a synth, from which sketches emerged, which subsequently formed the basis for the songs.

At the same time, I had the idea to write more lyrics and sing more for the album. In the past I worked a lot with featured artists and also got to know how they write their lyrics. At some point I started to ask myself why I always had to outsource that. Actually, it was something I wanted to do. I basically like to write lyrics, it’s just that I couldn’t combine this aspect with making music in my head before. This time I just tried it. In the beginning I wasn’t quite as practiced at writing lyrics, but I got into it pretty quickly.

It is allowed to sound more poppy once in a while

The songs actually seem a bit more accessible compared to the stuff you did before, while still being challenging of course. But it seems like they’re going a bit more in the direction of song, meaning towards simpler structures.

Clemens Bacher: During the process, I got more and more the feeling that the ideas had their strength in their simplicity. This also opened up the way to songs for me, so to speak. At the beginning I was still afraid of my own poppy side, because my stuff before was more club-like and jazz-influenced. But this has subsided over time. It is allowed to sound more poppy once in a while. But in the end you can’t speak of a classic pop album. There are too many different things involved for that.

What also distinguishes your album is, above all, the great musical breadth. Some songs are very danceable, others are incredibly atmospheric, and still others are very pleasing.

Clemens Bacher: I chose this musical framework quite consciously. The danceable is certainly due to my own history, as club music, whether hip-hop, house, broken beats or dubstep, has accompanied me through many phases of my life. I’ve spent a lot of time in clubs in my life. In 2015 or 2016, I played twelve gigs at Pratersauna. That simply belongs to me. And that’s why the framework with the danceable numbers at the beginning and end of the album. In between, the musical developments that are a little more recent for me are formed.

In the end, it all felt right, this, let’s say, clubby framework with a few outliers, like the number “The Marod”. That one also challenged me because I usually like to do stuff that sounds more optimistic and positive to me. Even if I write something only in a minor key or sadly. With this track, on the other hand, it didn’t really work out. I had to let myself get into this almost psychotic horror movie world. But at the time it was written, I just felt that way. It was the phase of the album development where I already doubted a bit whether it would turn out with this open approach.

What inspires your music? Where do the influences come from? What effect do they have on your music?

Clemens Bacher: First of all, music has always been a part of me. My parents have always been very interested in music and have always taken me to various concerts – from classical to jazz. In addition, my father was a fan of that 1970s jazz-rock-fusion-funk corner, so his record collection looked accordingly. Later, I was a huge hip-hop fan. Then I discovered electronic music à la Kruder & Dorfmeister and the stuff that was coming out of London at the same time. But I also listened to an insane amount of pop as a child. These were all influences that shaped me. And it also happens that when I write a song, at some point I say to myself, “That already exists.” When you go into such classic pop chord progressions, that happens quickly once in a while.

In general, though, I try not to make all these influences an issue at all, but just look at what feels right at the moment and what I’m up for at the time. I approach things more intuitively. I do admire people who go into a record with a completely preconceived idea and know relatively concretely what they want to do. But that’s not my approach. I try to let the things that suit me at that moment flow into the music. The same goes for my lyrics, which mainly deal with topics that are on my mind at that moment. I find this approach very exciting because it allows for a very open process.

The pieces all sound very thoughtful. They sound like you really put a lot of time and effort into them. To what extent does perfectionism play a role for you?

Clemens Bacher: I myself am anything but perfectionistic. In terms of sound, I always work with Paul Movahedi [note: The Clonious], who masters all my records and always gives me great mix feedback at the end, when everything is finished. And he’s very perfectionistic, especially when it comes to the sound.

I see myself more as a tinkerer. I try to get an idea down on paper as quickly as possible, or mix something together quickly that I can listen to right away. That’s the working method I enjoy the most. Listening to my own stuff straight from the studio on the way home. I like to work simply, quickly and intuitively. But it makes me happy when you say that my music sounds well thought out, because it means that I can come to a result without a perfect plan.

Your album doesn’t only go into depth musically, you also sing about more serious topics in terms of content. Among other things, climate change.

Clemens Bacher: In my lyrics I mainly deal with things that occupy me, thoughts that I just can’t get away from. The number “Last Snow” is the easiest way to explain it. I’ve been skiing since I was a kid. I’ve done it a lot. Today, when I see how the situation in the mountains has developed, how the glaciers have retreated and there just isn’t that much snow anymore, I just can’t bang down the slopes with the same childlike freedom. Skiing for me today always has such a stale aftertaste that I just can’t think away. I have tried to get to the bottom of this aftertaste. In the end, it’s a future nostalgia: I’m already sorry that everything will be gone someday. The sketch for the song came about just when I was thinking particularly hard about this subject. But the funny thing is that the number actually sounds quite happy.