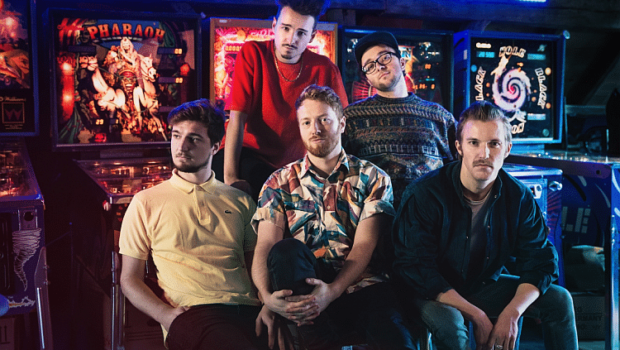 Jazz? Funk? Soul? Or maybe just pop? With ROBB there is no need to choose. On the 15th of April they released their second EP “Heat”. A warm-up for an album due out this fall. Marcus Deisenberg spoke to ROBB’s singer Robert Summerfield about Motown, major deals, and hints about the next album.

You are German with American roots. What brought you to Vienna?

Robert Summerfield: I studied Jazz at the Music and Arts University of the City of Vienna, which only made sense, since Vienna was the first city I visited alone, when I was 16.

The kind of music ROBB makes, doesn’t really exist here. The Austrian musicscape is varied, but this iridescent mix of soul, funk, jazz and pop is not represented. Do you know any other Austrian bands making similar music?

Robert Summerfield: No, I honestly can’t think of any.

How did the members of ROBB meet each other?

Robert Summerfield: Four of us were at university together, and another was at the University for Music and Performing arts. But we don’t usually talk about that because we were not really typical students. Most of us dropped out to do other things.

Robert Summerfield: One professor said that in his opinion, no relevant guitar music was made after 1973. It’s hard to, musically, see eye to eye with someone like that. If that’s what he thinks, that’s ok. But as a, at the time, 24 year old, I couldn’t see it. That’s when it became clear to me that they had a totally different perspective, one that wasn’t really mine. But others might have seen it differently. And it wasn’t true for every department. The vocal department was really nice, otherwise I wouldn’t have managed to stay there for three years.

It doesn’t seem to me that your music is typical musicians-music, I mean, not music from soloists who are concerned about proficiency and showing off.

Robert Summerfield: No, not at all.

It’s more about the groove that the listeners should take with them, right?

Robert Summerfield: Yes, exactly. I grew up with Motown. I studied jazz to expand my songwriting, not to become a scat-singing solo artist. I also think that what I said earlier isn’t specific to Vienna. It’s like that at almost every conservatory. As a musician I think you just have to learn it all and then forget it as quickly as possible. That’s not just for music but also film and other art forms. When you study art, I have been told there is at least one phase where you get worse because of the studies. Overlearning and dogma are a general problem with studying. I wouldn’t reduce it to the conservatory in Vienna. In ROBB we value jazz, have massive respect for it, but our roots lie elsewhere. Ross, our musical director that I created the whole thing with, is also half US American like me, and was also influenced by Motown.

What is so fascinating about Motown?

Robert Summerfield: With most of the Motown songs, even untrained listeners can tell just by hearing the rhythm section which song it is. That’s what I want it to be like with us.

Do you have any vocal idols? Sometimes your singing reminds me of José James.

Robert Summerfield: Thank you, I love José James. When you hear “Beyond”, one of our older numbers, the idea behind it was close to what José James was doing. It’s about playing with how deep you can go and how much volume you can work with. On the track “Goldmind” I do almost the opposite. High register, crisp, funky. Next to José James I think Donny Hathaway has also been a constant influence. More than James, simply because when you talk about idols, you tend to look to the past. And Prince. Him too. Definitely.

Robert Summerfield: We did a lot with Soundcloud, and that led to a lot of label contacts. I was actually always against the idea of signing to a label, wanted to do it all myself. Then we started talking to different labels. Nice meetings, but always non-committal.

Robert Summerfield: Yes, when it comes to major labels, I was always extremely skeptical thanks to various horror stories. But our management, who we found through a good friend, hat done a lot of work together with Warner. He had a good connection to them. Then it was clear that the whole thing would run a lot more familial than we normally would have expected.

So no 360 degree contract, no twenty options on any future works you might create as a band, or solo artist or producer?

Robert Summerfield: (laughs) No, not at all. We don’t communicate that yet, either. The label supports us on Spotify and other venues that can be difficult to deal with alone. But whether or not our first album will be on Warner or on our own indie-label is still open – to take some pressure off of us. Maybe it will come out on some other independent flag, and Warner will support us on a few songs that fit into the Warner concept. Why not?

What is next on the horizon?

Robert Summerfield: Now the EP, the album will be coming this fall. As I said, it’s not yet clear with which partner we will do that. I don’t really want to talk about this business stuff in public. I don’t think that is very sexy.