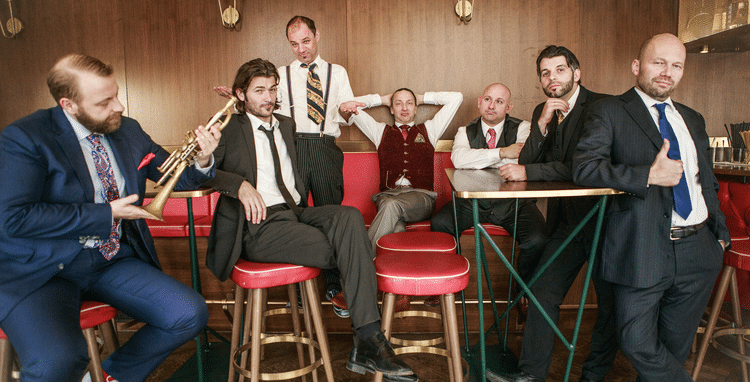 It is the vast musical diversity that distinguishes today’s Austrian jazz scene, providing acclaim and attention well beyond the country’s borders.. Regardless of subgenre, be it based on more traditional routes, larger or smaller instrumentations, experimental or avant-garde niches, unconventional or genre-crossing music: all are characterized by liveliness, innovation, and creativity. In term of artistry and musical skills, the Austrian jazz scene easily ranges among the world’s finest.

The Vienna Art Orchestra as a Stepping Stone for Many Careers

The name Vienna Art Orchestra (VAO) is inseperably connected to the history of Austrian jazz. Sadly, the VAO dissolved in 2010, but for more than three decades, the big band founded in 1977 by Mathias Rüegg was the best known and longest-serving figurehead of the local scene. The Internationally successful jazz orchestra was a vital career stepping stone for numerous musicians, such as the saxophonist Wolfgang Puschnig, who went on to achieve transnational fame with his release “Alpine Aspects.“ The same is true for the saxophonist Harry Sokal, who made an international name for himself in the mid-1980s with the legendary Art Farmer Quintet and the Swiss-Austrian trio Depart. Both Puschnig and Sokal continue to shape the jazz scene to this day.

Two prominent representatives of the next generation, who also began their jazz careers in the VAO, are the trumpeter Thomas Gansch and the double bass player Georg Breinschmid. Thomas Gansch is part of the internationally acclaimed brass combo Mnozil Brass, playing sold out concerts across the globe. Georg Breinschmid, who originally comes from a classical music background and used to be a member of the Vienna Philharmonic Orchestra, is very successful with his trio Brein’s Cafe.

The dissolution of the Vienna Art Orchestra clearly left a void, but this was filled fairly quickly by the Jazz Big Band Graz. Directed by Heinrich von Kalnein and Horst Michael Schaffer, the Jazz Big Band Graz has been active since the early 2000s and has since been expanding the classic big band sound with various new musical facets (“Urban Folk Tales”). Working in a similar field, just slightly more experimental, is the Ensemble Studio Dan, which originated from the Jazzwerkstatt Wien and ist surroundings and combines chamber orchestra and big band sounds. Led by Daniel Riegler, the ensemble has collaborated with renowned international stars, such as guitarist Elliott Sharp. The jazz scene in western Austria is also quite vibrant, as is evidenced by the activities of the Jazz Orchestra Vorarlberg, which was founded by Martin Franz and Martin Eberle.

Beyond the VAO, a number of other creative jazz artists were able to achieve international renown. These include, among others, the guitarist and head of the label Material Records, Wolfgang Muthspiel, who launched his career in New York and later spearheaded various successful projects in Austria (including the solo project “Vienna Naked”, the Wolfgang Muthspiel Trio feat. Larry Grenadier, and his collaboration with Jeff Ballard). With his cello quartet, the Austria-Based German native Ulrich Drechsler managed to surprise the European club and festival scene with distinct and unconventional sounds.

An important proponent of Austria’s improvisation and free jazz scene is the trumpeter from the Burgenland province, Franz Hautzinger, who has been able to merge jazz with avant-garde like no other – as is evident on his legendary CD “Gomberg” (2000). The Hammond organ virtuoso Raphael Wressnig and pianist Roland Guggenbichler are further notables. While Wressnig is more drawn to blues, funk, and roots with American influences, Guggenbichler combines jazz with African and classical music in his ensemble Mozuluart.

The Significance of the Jazzwerkstatt Wien

The dynamic developments in the domestic jazz scene of the recent past is closely linked to the Jazzwerkstatt Wien,which was founded in 2004 by Clemens Wenger, Clemens Salesny, Wolfgang Schiftner, Daniel Riegler, Bernd Satzinger, and Peter Rom. They created Jazzwerkstatt Wien – and an eponymous label – in order to provide a platform for the young jazz scene and offer musicians the possibility to present themselves and establish networks. Once a small group of six, the Jazzwerkstatt Wien has now become a significant institution that is an inseperable from the Viennese jazz scene.

Stylistic Diversity as a Hallmark of Austrian Jazz

Members of the younger generation are moving boldly beyond traditional boundaries of jazz, and are increasingly flourishing in these new crossover fields: the Ruff Pack trio, consisting of guitarist Matthias Löscher, bassist Stephan Kondert and the New York based drummer Daru Jones, kick their version of jazz up a notch by combining it with hip hop. The Salzburg pianist Philipp Nykrin crosses jazz with elements of electronic music in his band project. Edi Nulz, the combo centering around the Styrian saxophonist and clarinetist Siegmar Brecher, interprets jazz with an irresistible rock and punk style. The young guitarist Diknu Schneeberger lets his version of jazz rise in gypsy swing. Jazz combined with chamber music and world music elements characterizes the music of Styrian saxophonist and clarinetist Patrick Dunst. The award-winning quartet Kompost3 are true pioneers in the art of mixing styles, having found their niche somewhere between funk, jazz, rock, and various forms of electronic music.

Openness to all genres has become a trademark of many acts from Austria, such as the Swiss-Austrian trio Rom/Schaerer/Eberle, who are constantly treading new musical paths. The trio’s successful album released in 2013 “At The Age Of Six I Wanted To Become A Cook” ranges among the most exciting jazz productions this country has seen in recent years.

Another musician worth mentioning is the Berlin-based Vorarlberg pianist David Helbock, who was able to achieve international acclaimRegardless of whether he performs as a solo artist, in a duo with violinist Simon Frick, in his eponymous trio or with the formation Random/Control: Helbock conveys his very own distinctive sound within a range that extends from jazz, ethno, and folk music to pop in the style of Prince.

The globally reknowned Hang virtuoso Manu Delago achieved fame as the percussionist of the Icelandic pop icon Björk. However, the native Tyrolean‘s array of music projects reaches far beyond this albeit sensational collaboration, as is the case with his internationally successful ensemble project Handmade.

Another well-respected artist from Western Austria is the Tyrolean musician Christoph “Pepe” Auer, who is not only a renowned saxophonist and bass clarinetist, but also the founder and owner of the label Session Work Records.

In past years the Tyrol province seems to have evolved into a kind of jazz stronghold in Austria,producing outliers such as the young and upcoming chamber jazz rock quartet HI5, which gained nationwide attention with its 2014 album “Attack – Decay – Sustain – Release”.

In order to accommodate their need for experimentation many musicians are increasingly moving away from tradtional instruments. Piano, bass, drums, trumpet, saxophone and the likes are increasingly being complemented by strings and instruments typical for the Alpine region. Accordions, for example, are innovatively combined with jazz related playing techniques by the internationally acclaimed Klaus Paier, Christian Bakanic (Trio Infernal), and Paul Schubert (Trio Akk:zent). The radio.string.quartet.vienna and the duo Bartholomey/Bittman rely solely on classical instruments. The zither – probably one of the most typically Alpine instruments – is used in various genre-crossing contexts by musicians Martin Mallaun and Christoph Dienz.

In the Austrian jazz scene female musicians have increasingly begun to take the lead in projects of recent years. Salzburg-born musician Angela Tröndle, for example, gained attention with her band project Mosaik in the mid-2000s and was able to succeed beyond national borders with her projects The Little Band from Gingerland and LUNA*LAB. Another musician from Salzburg is the singer and pianist Sabina Hank. With her distinctive style, she is noted among other things for her musical partnership with Willi Resetarits (“Abendlieder”).

The Lower Austrian saxophonist Viola Falb is among the country‘s most versatile, prolific, and creative musicians(Falb Fiction, Phoen, Kitsch ‘n’ Glory), who was once active in the Jazzwerkstatt Wien and has since won numerous awards for her outstanding musical creations. Another example of imaginative innovation is the composer, singer, and electronic musician Susanna Ridler, who merges jazz and computer music in her project [koe:r]. The double bassists Gina Schwarz and Judith Ferstl (chuffDRONE) delve into the spheres of deeper sounds, complementing the Austrian jazz scene with their very own unique style.

Parlaying jazz into a new pop context is the forte of artists such as Marina Zettl. The Styrian singer, who has already released three acclaimed albums (most recently “Watch Me Burn”, 2013) with her colleague Thomas Mauerhofer, has accrued an impressive fan base at home and abroad. Similar examples are the songwriters and composers Laura Winkler, who is releasing a new album with her band Holler My Dear, and Stephie Hacker, whose concert tours have taken her to the United States and Japan.

The singer Susana Sawoff is definitely an artist to watch. Previously active as a member of the electro-pop-punk combo Sawoff Shotgun, the daughter of an Australian father and Spanish mother is now treading her own new path as a songwriter in a significantly more jazz-oriented direction.