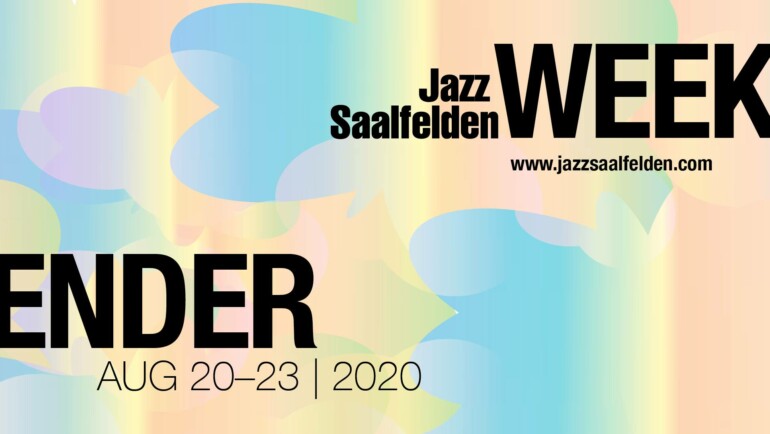 After the organizers of the International Jazzfestival Saalfelden learned that COVID-19 restrictions pertaining to artistic and cultural events were easing up, they decided to show the world that the Saalfelden Jazz Festival is alive and well. Heralding optimism and confidence, the idea for a “Jazz Saalfelden Weekender” was born, a series of weekend concerts that aims to delight music enthusiasts.

Even though the organizers are not able to follow their usual routine and host concerts on the Mainstage at the Congress Center’s and the town square’s big stages, they organized a musical happening from August 20 to 23, 2020 with a concert for every taste, from jazz to pop. Concerts will take place in the city park, at Kunsthaus Nexus, on alpine pastures, in the Schloss Ritzen Museum, at the “ranch,” on the roof terrace of the Congress and in the popular Fuchs bookbindery. Additional highlights will include guided hikes with musical accompaniment through the surrounding mountain scenery.

As international travels are difficult right now, the line-up consists mainly of Austrian artists. Even more reason to highlight a handful of artists that you shouldn’t miss!

When his debut album was released at the end of 2016, it received praise and top ratings from the bank. “Ansa Woar” achieved gold status in record time and caused even the German neighbours’ halls to be full. In the meantime Voodoo Jürgens has matured as a songwriter and has risen to the highest Olympus of German-language songwriting. Absolutely cool handmade music with very black, but just as well thought-out jibe and tons of charisma!

Grammy-nominated percussionist and composer Manu Delago is back with a new album: Circadian – an acoustic journey through the various sleep cycles, from REM to light and deep sleep to an abrupt awakening – inspired by the circadian rhythm of people and Delago’s personal sleep deprivation during his numerous international tours with Björk, Olafur Arnalds, Cinematic Orchestra and Anoushka Shankar. “I wanted to make the elements of electronic music audible through acoustic instruments. Clarinets and the accordion should replace the warm sound of an analog synthesizer. Strings and brass instruments create an orchestral and at the same time intimate character. ”

Sound ritual is a multi-faceted examination of the phenomenon of waves, the analogies between tones, colors and shapes. The performances are pure atmosphere, they reveal themselves as floating, completely filling the room and generating sound clouds. The basis of these drone improvisations is the feedback from several guitars, played simultaneously by Karl Ritter.

The classic Koi sound is known to be in the middle of the glaring 80s. On “Prominent Libido” Ankathie also makes wild excursions in the coming decades. While the last album “I Hate The Way You Chew” was perfectly suited as a driving dance film soundtrack, an alternative pop attitude from the 90s is now also mixed in. In between, Ankathie Koi also channels the hymnic power-pop feeling of the turn of the millennium. Although the 80s have a lot to offer musically and visually: Ankathie Koi cannot be reduced to just that.

A super band from Vienna, who`s serious about one thing: having fun! MY UGLY CLEMENTINE creates a more than contemporary dusting off the guitar with borrowings from the indie / college rock era from the 90s. A post-punk approach here, irresistible pop hooks there, strong, serious messages – and still a sing-along chorus and a smile …

The Strottern’s new project: If they “inflate” into a quartet with “Metal”, then their music moves even closer to the major opposite poles of their music: the diversity of sounds in the big city and (alpine) folk music. Trumpet and trombone play a major role in both worlds. And so the spectrum is stretched, freedoms are explored radically, ports at home are headed for more directly. Tender things become more tender, wild things wilder – a wonderful project!

The three most suitable adjectives with which one can best describe the sound of the Duo 4675 are unconventional, unclassical and uncategorizable. The siblings Astrid and Beate Wiesinger audibly do exactly what they want, they leave the well-trodden musical paths and realize a refreshing and different jazz sound with their bas saxophone. Stylistically, the musicians from Upper Austria, who made the postcode of their hometown the band’s name, draw from the full, they draw the line in a wonderfully weird way from jazz to blues to pop.

Earthy 1960s guitar sound, driving rhythms, jaw harps and didgeridoo. A certain love for the worlds of Ennio Morricone and Quentin Tarantino cannot be denied in the music of Cari Cari … The Rolling Stone chose the band 2018 as the most important live discovery of the Primavera Sound Festival in Barcelona. Since their debut “AMERIPPINDUNKLER” they have been treated as one of the most exciting new discoveries in Europe from blogs and magazines worldwide!

Nominated twice for the Austrian music award Amadeus, SOIA is one of the most exciting soul designs of recent times. Her songs range between hip-hop, sensual neo-soul and expressive contemporary R&B, packaged in an electronic envelope made of synths and keys, the rich beats are adorned with playful melodies, the lyrics, frankly.

“Brass” by Lukas König is a bold announcement that rejects straight pop and instead shines through the urge for artistic freedom and the will to change. The metal, the brass always comes through here, sometimes drags us mercilessly, drives on, resounds. An artistically valuable and independent work by one of the most remarkable drummers these days.

So far, Mira Lu Kovacs has released three albums under the name ‘Schmieds Puls’, plays in the exciting experimental pop formation 5K HD and amplifies the super combo ‘My Ugly Clementine’ on guitar.
So, in the memory of the public interested in music, she has set up a lush house with a garden …

For more info and the full line-up please visit the website https://www.jazzsaalfelden.com/de/programm