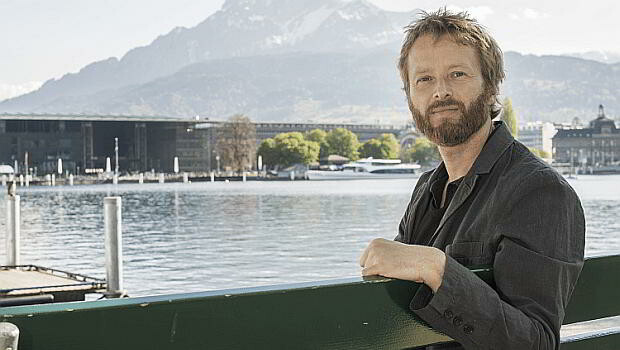 The composer JOHANNES MARIA STAUD, who lives with his family in Vienna, often uses reflections on philosophical questions, social processes or political events as an inspiration for his compositional work. At the beginning of December his new opera “Die Weiden” was premiered at the Vienna State Opera, conducted by Ingo Metzmacher. Isabella Klebinger and Michael Franz Woels met JOHANNES MARIA STAUD between the intensive final rehearsals at the building on the Ring. The questions are preceded by a quotation from the literature “The Willows”:

„Yet what I felt of dread was no ordinary ghostly fear. It was infinitely greater, stranger, and seemed to arise from some dim ancestral sense of terror more profoundly disturbing than anything I had known or dreamed of.“ Algernon Blackwood, The Willows, 1907

As a child you were very interested in geography, you originally wanted to become a cartographer. Where do you see connections between the disciplines of cartography and composition?

Johannes Maria Staud: Geographical and meteorological terms have always interested me. What is a map, what is a territory, what is my score? It must also be interpreted, is it now a map or is it already a territory? Such semantic questions have interested me for a long time. In 2001 I wrote the piece “A Map Is Not The Territory” or in 2008 “On Comparative Meteorology”. Drawing fantasy maps as a child led me directly into writing scores, into inventing new acoustic territory.

You once described the genre of opera as “modern-untemporary” …

Johannes Maria Staud: Opera is music with text in theatrically staged and sung images. I still find this storytelling to be extremely contemporary and avant-garde – but not in a post-modern sense. I am more modern than postmodern. But that doesn’t mean that this isn’t about progress. I have also worked through my prejudices against singing. If you write for this house, you should have somehow reconciled yourself with the genre of opera. But I don’t betray myself aesthetically here, I don’t do anything more comfortable here. The narrative form can also be unconventional, as the rough design of “Die Weiden” makes clear.

“I AM MORE MODERN THAN POSTMODERN“

After the Director of the Vienna State Opera Dominique Mayer heard your work “On Comparative Meteorology” at Carnegie Hall in 2014 with the Vienna Philharmonic under Franz Welser-Möst, you were asked to compose a commissioned work for the Vienna State Opera. In choosing the librettist, you once again chose to work with the German poet Durs Grünbein. What has changed over the years in your collaboration with Durs Grünbein, what is so special about this collaboration?

Johannes Maria Staud: We got to know each other better over the years. The process of exchange during the collaboration has intensified in the meantime, we have grown together. It is good to work with someone who knows how to work and how much pressure you can put on. In every opera we have tried to approach structure, focus, and cast differently – now we have arrived at the political opera with “Die Weiden”.

There were no guidelines in choosing the topic. In your first joint opera “Berenice” with Durs Grünbein in 2004 for the Munich Biennale, the Wiener Festwochen and the Berliner Festspiele, Edgar Allan Poe served as the literary model. The second, “Die Antilope” from 2014 for the Theater Luzern and the Lucerne Festival, referred to the salon comedy “Eleutheria” – absurd theatre by Samuel Beckett. Now the horror story “The Willows” by Algernon Blackwood served as a source of inspiration. How did the selection of this uncanny story from the early 20th century come about?

Johannes Maria Staud: Algernon Blackwood’s work is somewhat better known in Anglo-Saxon circles because he was considered a role model for H. P. Lovecraft, who once described “The Willows” as the perfect horror story. “The Willows”, this natural magic story, ends with a threat from another realm. In our opera “The Willows”, the forest serves as a deep psychological theme. It is the dead who have died an involuntary death who make contact here. The wandering pastures are already familiar from Shakespeare’s “Macbeth” and German romanticism definitely played a role in “Die Weiden”, be it Weber or Wagner. References from the horror film genre would be films like “The Blair Witch Project” or “Antichrist” by Lars van Trier. Like “The Willows”, the opera “Die Weiden” also takes place in the Danube meadows, but makes reference to the Jewish-Hungarian victims in the region of Hainburg who died violently during the death march, the massacre of Engerau in 1945, shortly before the end of the war. The Hungarian victims of Jewish faith had been brought to the border region to build the Eastern Wall. Forced labourers who were too weak for the march were shot by SS henchmen in Engerau. In our opera we let these victims be resurrected and speak, as it were. Our main character Lea is supernaturally gifted. She sees the dead: a head forester, a water corpse or, during a xenophobic event on the market square of a small town, her parents, who once had to flee the country by the river, to which Lea has now travelled with their new friend.

“WE THEMATIZE THE RETURN OF SPIRITS THAT HAD BEEN BELIEVED DEFEATED.”

In the meantime, due to this shift to the right in the country, the unempathetic, the insenstivitve, has become the common sense. Today you can say things with that would have been unthinkable a few years ago – a glance at Internet forums is enough. No politician today resigns when he publicly talks about putting asylum seekers in concentration camps. One sees a brutalization of language. We have already witnessed this inhumanly unemphatic thing on this river. Our time reminds me of the time of Austrofascism in the last century. Right-wing populists are trying to undermine freedom of the press, to put critical journalists under pressure, to storm the BVT, to attack the judiciary – with the aim of grabbing power at some point with an absolute majority, and then to question everything that generations have fought for- starting with human rights and freedom of expression. A glance at Poland or Hungary should be enough of a warning.

As a teenager you also had a rock music phase – bands like Nirvana or The Velvet Underground were role models – before you turned to serious and classical music at the age of 17. How much do you think this time still resonates in your compositions?

Johannes Maria Staud: I’m still influenced by rock music. Until I moved back to Austria from England ten years ago, I was more intensively involved with rock music and I still draw on these experiences: from bands like Vampire Weekend or Portugal, The Man. Lyrically you can find a little Pulp in the opera, I suggested the way Jarvis Cocker writes lyrics to Durs Grünbein. There are three and a half songs in the opera “Die Weiden” that function as so called popular musical “isles”. If my compositional language wasn’t enough, I took refuge in rock music, so to speak – but it must never sound like a musical.

“WHAT CARP WOULD SOUND LIKE IF THEY COULD TALK”

How can one imagine the process of developing a libretto in general?

Johannes Maria Staud: This opera is not a finished libretto. We worked together with the German director Andrea Moses early on and got her involved with the dramaturgy team. We developed the libretto together. When you invent a story yourself, you need this corrective process. In the pictures we experience a river journey, a station drama. There is a lot of singing, even speaking. There are six pictures and four passages in between: a prologue, a prelude, an epilogue and rebuilding, an interlude. The passages connect the pictures, in them the river is the main protagonist, there is a lot of live electronics each connected to a solo instrument. I tried to generate water sounds acoustically – the natural landscapes are generated by an acoustic translation of wind, water, bubbles – and I thought about how carp would sound if they could speak.

A central element of the opera, which you have described as an artistic form of contemporary analysis, is the river Dorma. Could this be understood as the “sleeping Danube”? What myth symbolizes this sleeping river that meanders through Europe?

Johannes Maria Staud: The name has caused a lot of internal discussion for us, which was preceded by many considerations – we didn’t just want to call the river the Danube. In the end, it is simply this image of a land by a great river that connected the peoples and did not separate them. Today in Europe the focus is on demarcation, a small scale state based on the principle “us against them”. A river is a powerful metaphor, you can’t really stop it, even if you regulate it. Sleepy, because such a river can awake and overflow its banks at irregular intervals. Of course, other issues could have been addressed here: environmental protection or global warming – but we left these doors closed. Here we are more interested in what happens to the people on the river who jump on hate slogans. The river as eternally flowing is a good counterpoint to this. But of course you have to be careful not to act in a historically relativistic way. Just because you put these crimes in the context of the eternity of a flowing river, it doesn’t make them any worse. In any case, I hope that the spectre of demagoguery and populism will soon be defeated by our civil society. I remain an optimist.