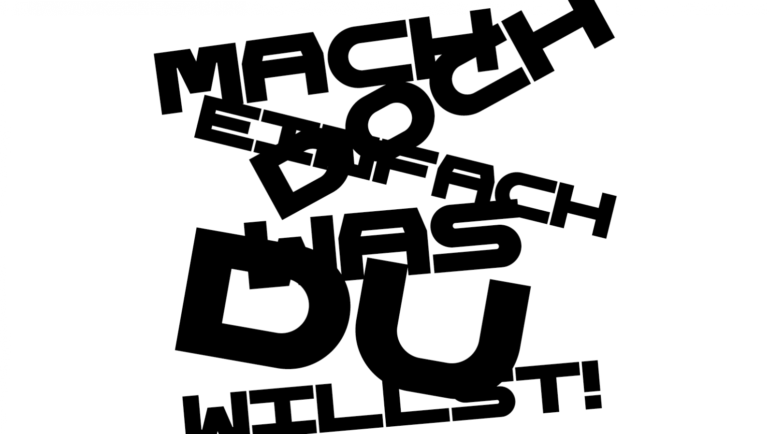 From October 30th to November 30th, 2021, the WIEN MODERN festival, with its 34th edition, will once again open a month-long major platform for inspiring encounters between artists and listeners of new music of all forms and colors. A total of 120 events at 38 venues in 11 Vienna districts, 56 productions with 80 world premieres, as well as 30 Austrian premieres, and 60 female composers all come together under the title, “Mach doch einfach was du willst” (“Just do what you want”) with a plentitude of string quartets, improvisation, generational shifts, an anarchic pioneer of graphic notation, lots of music for young audiences, and the chance to make discoveries beyond the classical concert format, from two days of open studio doors to the major opera premiere production of Poppaea at the Odeon. The opening concert will take place on October 30th at the Wiener Konzerthaus.

MUSICAL CHARACTERS WITH THE COURAGE TO TAKE AN INDEPENDENT PERSPECTIVE

Everyone keeps saying: do this and don’t do that. Art says: nothing, for months. But what does it say when it suddenly says something again? Maybe it just says: just do what you want.

Numerous composers have developed new works for the festival, some in years of preparation, others in the transformative months of the pandemic. Extraordinary artistic personalities were invited by Wien Modern to simply do what they want. The result is a festival program that invites you to discover the growing diversity of new forms of expression and event formats in the field of music, and that wants to encourage you to explore independent perspectives and to expand your musical horizons with gusto.

“POPPAEA” AS A GRAND OPERA PREMIERE AT THE ODEON

Michael Hersch and Stephanie Fleischmann’s first joint opera, “Poppaea” (Nov. 5-7) comes much closer to the brutal historical events in the midst of Rome’s center of power under Emperor Nero than Monteverdi’s genre-premiering Poppea, the baroque opera with its deceptively happy ending: risk-taking, ambition, abuse of power and authority, violence against women, bloody murders and intrigue bring a world to its end. The current examination of the 2000-year-old story is presented in the world premiere production with Ah Young Hong (Poppaea), Steve Davislim (Nero), Silke Gäng (Octavia), Jürg Henneberger (musical director), Markus Bothe (director), Piertzovanis Toews Architects (stage), Eva Butzkies (costumes) and Marius Kob (figure construction) in co-production with the Festival ZeitRäume Basel – Biennale for New Music and Architecture brought to the opera stage for the first time. Thirty-two years after the world premiere of Beat Furrer’s one-act opera Die Blinden at the Odeon, Wien Modern again ventures to present on the same stage the major operatic debut of an extraordinary composer, Michael Hersch, who was born in Washington, D. C., in 1971 and lives in Baltimore, Maryland.

“Michael Hersch continues the tradition of the great mavericks in the U.S.: Charles Ives, Harry Partch, John Cage… But he is not searching for novel musical materials. He is the explorer of an unconditional, radical expressivity that reveals, unadorned, the human abyss. In music. In a new kind of crystal-clear beauty.” (Georg Friedrich Haas)

Two of the new music theater productions, Jorinde by Maria Gstättner (Taschenoper and Landestheater Linz at MuTh) and Der Besuch vom kleinen Tod by Klaus Lang (netzzeit at Dschungel Wien), are aimed specifically at young audiences aged six and up.

New formats that expand the concert framework are playing a bigger and bigger role at Wien Modern. One of the largest productions of the festival is the four-hour installation performance ceremony II by Georg Friedrich Haas with 70 musicians playing instruments from six centuries (Kunsthistorisches Museum). The audience can also move freely in Peter Jakober‘s string orchestra work Seitenraum (Palais Mollard), which is spread over several rooms. Brice Pauset, the multimedia team AROTIN & SERGHEI and Klangforum Wien present the intermedial composition Vertigo after Alfred Hitchcock (Wiener Konzerthaus). Marino Formenti conceives the 760-minute performance Feldman 760 as part of the joint Baselitz focus of the Musikverein and Wien Modern for a Baselitz work show at the Albertina. In Limina / Sensation 1, Dominican performer Ligia Lewis collaborates for the first time with U.S. composer Mark Barden on a slowing down of the perception of time (Tanzquartier). The collective Rdeča Raketa presents its latest sound comic Einsame Ameisen Amnesie together with Ö1 Kunstradio (ORF RadioKulturhaus).

Several installations and immersive projects invite visitors to dive in. For Towering Silence, Ingrid Schmoliner creates an immersive reclining surface in the catacombs of Palais Coburg together with Adam Pultz Melbye. For Fennesz plays NOUS Sonic, the electronics pioneer composes a virtual soundscape in the foyer of the Vienna Konzerthaus using the interactive 3D headphone system developed in Vienna. The Acousmatic Project invites visitors to multi-channel electronics in the dome of the Natural History Museum even before the actual festival begins. Winfried Ritsch deconstructs a church organ in the venue, Reaktor for Gesang der Orgel. Volkmar Klien cuts up a sounding space made of paper live for the installation Im Sattel der Zeit at the mumok (Museum of Modern of Modern Art Vienna). As part of Instrument Modern, the surprising Viennese scene of experimental musical instrument making opens its doors for a weekend. And alongside the Albertina’s Baselitz show, the Polish Institute presents the photo exhibition Anna Dąbrowska-Lyons: Polish Punk 1978-1984, beginning with a panel discussion on Where have all the rebels gone?

BIG CONCERTS IN THE FESTIVAL FORMAT

At the opening concert with the RSO Vienna conducted by Marin Alsop (Oct. 30, Vienna Konzerthaus), trumpeter Selina Ott will have a special role: in his new concerto, Thomas Wally asks what happens when the soloist does not fit into the overall system. Milica Djordjević, winner of the Claudio Abbado Composition Prize 2020 and to be heard at Wien Modern in both the opening and closing concerts, weaves a beautifully scratchy tapestry of sound out of nothing. Christian Ofenbauer completes his operatic four-parter with a radical satyr play (without words), Andrea Sodomka shows the Unschärfe (blurriness) therein. Crystal clear (without tones).

The great South Korean-born composer Younghi Pagh-Paan can be described as a wanderer between two worlds. Shortly before her 76th birthday, she comes to Vienna for a portrait evening with MUK in the Mozart Hall of the Vienna Konzerthaus (Nov. 3). The evening before, there will be an unconventional solo on the road in the city, with violinist Nurit Stark.

At the Claudio Abbado concert in the Golden Hall of the Musikverein (Nov. 9) the Arditti Quartet, Sofia Jernberg and Holger Falk as soloists in conductor Christian Karlsen’s RSO debut will interpret an Austrian premiere by James Dillon and the world premiere of the great new orchestral work by Chaya Czernowin: large blocks of orchestral masses drift apart due to enormous, unpredictable forces – “a lament on the hubris of us humans to believe that we can control everything around us” (Chaya Czernowin).

The new Oratorium by electronic pioneer Thomas Kessler and striking narrator, essayist and playwright Lukas Bärfuss (Büchner Prize 2019) will have its premiere at the Jesuit Church on Nov. 14. The ensemble xx. jahrhundert celebrates its 50th anniversary with world premieres by Tanja Elisa Glinsner and Johannes Maria Staud in the Mozart Hall of the Wiener Konzerthaus (Nov. 15).

After the “stratospheric overall performance” (Donaukurier) at the Salzburg Festival, the RSO Vienna and Ingo Metzmacher also invite the public to one of the rare complete performances of Friedrich Cerha‘s Spiegeln at the Vienna Konzerthaus (Nov. 19).

This year’s Erste Bank Composition Prize will be awarded to composer, arranger, media artist and software developer Christof Ressi, born in Villach in 1989, at the concert of Klangforum Wien at the Wiener Konzerthaus (Nov. 24).

16 composers and musicians from the Viennese record label Fraufeld offer a current update on the rapidly growing diversity of women in composition and improvisation in the Mozart Hall of the Vienna Konzerthaus (Nov. 27). Beat Furrer will give an extraordinary glimpse into his latest work at Wien Modern starting on November 20: three world premieres, two Austrian premieres, all string quartets with Quatuor Diotima, two evenings with Furrer as conductor, including his debut on the podium of the Vienna Symphony Orchestra at the festival’s conclusion (Nov. 30).

What does Georg Baselitz personally like to listen to most? This question will be answered by a four-day festival in festival (Nov. 22-25) jointly curated by himself, the Musikverein and Wien Modern, in which the artist shares his particular passion: contemporary music, especially string quartets, preferably finely dosed, and radical. Including several spectacular programs by Quatuor Diotima, with Beat Furrer as composer and conductor, and world premieres by Olga Neuwirth and Elisabeth Harnik based on a text by Georg Baselitz (Nov. 20-25).

IGNM and Wien Modern jointly present a three-day festival in the festival between composition and improvisation (Comprovise [#3], Nov. 26-28) with many prominent figures from the Austrian and international improvisation scene.

A YOUNG LOOK AT A PIONEER OF GRAPHIC NOTATION

On the occasion of the 100th birthday of Anestis Logothetis, five evenings are scheduled in which numerous young artists will take a fresh look at the idiosyncratic work of the pioneer of graphic notation (Oct. 31, Nov. 4, Nov. 8, Nov. 12 + Nov. 20).

MUSIC FOR A YOUNG AUDIENCE

In addition to the music theater premieres Jorinde at the MuTh (10, 14 + 17 Nov.) and Der Besuch vom kleinen Tod at the Dschungel Wien (01 – 06 Nov.) (see above), the successful long-standing project Junge Musik (25 Nov. at the Reaktor) and the matinée petite at the mumok (07 Nov.), among others, bring children and young people into contact with new music in cooperation with the IGNM and the Vienna Music Schools.

Translated from festival Press Release in German by Arianna Fleur.