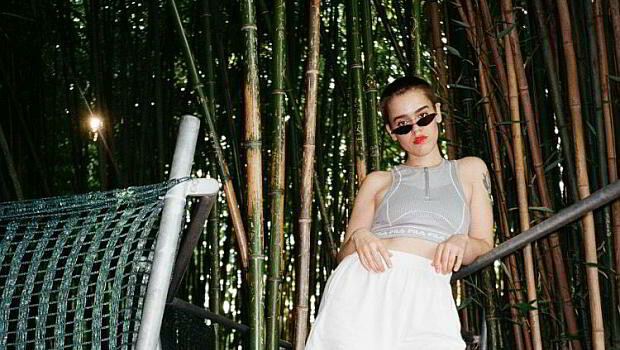 “Who is KEKE?”, a question a lot of people asked themselves after the artist appeared almost out of nowhere onto the virtual scene. A few answers: KEKE aka KIARA HOLLATKO is in her early twenties, her actual musical roots lie deep in jazz studies, now she does rap. Her debut single “Donna Selvaggia” was released in summer on the Universal offshoot “MOM I MADE IT”, a title reference that was last sung about with a lot of heart and soul by songwriter LUCIO BATTISTI. Recently she followed up with the second single Validé ft. Lent. KEKE spoke with Ada Karlbauer about forming an antithesis to sexist lyrics, as well as the ever recurring reproach of hypocrisy, annoying feminism, and an absolute musical love story.

KeKe: It all started when I made a rehearsal video, a cover of London Grammar, that was actually a ballad. A friend of mine sent this to kidkut, who is A&R manager at Universal Music and founder of the label MOM I MADE IT. He suggested that we sit down and explained to me what he had in mind. Then I started working with Shawn the Savage Kid, which was just an absolute musical love story. I learned so much from him musicwise, he supports me so much.

How did it get from this original cover ballad to rap?

KeKe: I actually come from jazz and I study jazz too. After a short time I was asked if I wanted to try rapping, and I thought to myself: “Why not? It just worked. I still find it very strange when people call me a rapper. I don’t feel like I have the credit to call myself that: I am a singer. But it’s fun and I think it’ll be good if I stick to it.

The debut single with the almost iconic title “Donna Selvaggia” was recently released on “MOM I MADE IT”. What were your thoughts behind it?

KeKe: There’s a rapper in the Austrian scene who said in one of his lyrics: “Girl, sit down.” There´s also something pretty bad right before. That made me pretty irritated and angry back then. I thought to myself: “Dude, who are you anyway? You sit down!” Don’t get me wrong: I don’t hate every man who raps, on the contrary! It is and was important to me at that moment to be an antithesis to all the sexist lyrics. That’s why I wrote the track “Donna Selvaggia”. Besides, I just felt the need to celebrate the women in my life. It’s all very personal. If I can’t identify myself with my content, it’s going to be shit.

“IT DOESN’T HURT ME WHEN PEOPLE CALL ME AN ANNOYING FEMINIST.”

How do you perceive the current hip-hop and rap scene as a whole?

KeKe: I simply notice that as a woman you are judged quite differently and much more unfairly. Things are commented on that normally shouldn’t affect someone at all. Rap is an extremely male-dominated scene and that just has to change. I was also happy to play a gig with ANTONIA XM at SISTERS recently. I think it’s super cool to work with a DJane, but we’re outnumbered. Sometimes it’s just not that nice. We have to create a different consciousness; you have to dare yourself to be unpleasant. It doesn’t hurt me when people call me an “annoying feminist”, I just think to myself: “Honey, you just have to think about it a little bit.”

Several times after the release of “Donna Selvaggia” I was accused of being a hypocrite. Because I released a song about such a badass woman, although I’m actually super neurotic and anxious. Then I just think to myself: “Guys, that’s the point.” I, someone who’s been through a lot, can be just as badass. To some extent it makes you stronger, because this accusation is just so hollow.

German has been a popular language for some time now, and now chronically crosses national borders.

KeKe: I really dig that with the German language. In the beginning I never wrote in German, I even found it strange. Now I love it, I think you can do a lot with German.

Perhaps in this context it is also more about the rhythms, the vibe as a whole, than about the concrete meaning of the words used.

KeKe: My father, for example, does not understand a single word of my texts, nothing. I can also do a lot more slack, I actually pronounced it quite German for my circumstances, but I wouldn’t want it to be super clear either.

Which artists have a special influence on your musical output?

KeKe: Travis Scott is pretty big for me. Princess Nokia and IAMDDB too. I also hear a lot of FKA Twigs and Kelela. Florence and the Machine has nothing to do with me at first sight, but I love this woman and have been listening to her albums up and down for years. James Blake is also important.

How important is international success?

KeKe: I don’t even think about it, I work from day to day. I’m still so new to the Austrian music scene, I’m just getting to know it all, but there are a lot of cool things in it. In recent years a lot has happened, not only in Austria, but also internationally. Basically I just celebrate good music and look forward to everything that´s going to come.