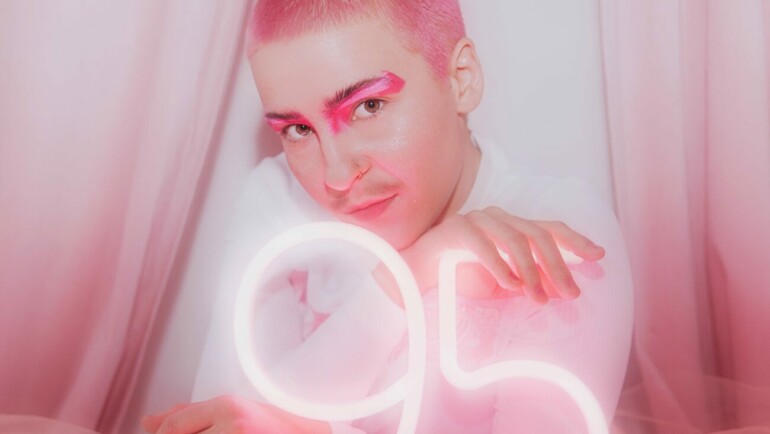 KATHRIN KOLLERITSCH has become an integral part of the Austrian music scene. Not only is Kathrin part of the Impala Award-winning band MY UGLY CELEMENTINE, Kathrin has also attracted attention in recent months with the solo project KEROSIN95. On March 19, 2021 the debut album “Volume 1” was released. Itta Francesca Ivellio-Vellin spoke to KEROSIN95 about political struggles, personality splits and make-up tutorials.

How do you still have the strength to fight?

Kerosin95: By thinking about how I can refuel it regularly. You mean political fights, right?

Kerosin95: The battles just have to be fought. I can either no longer read the news and lock myself in my room or keep fighting them. But I try not to fight all off them. For example, sexism – the cis-dudes could take care of that, so I wouldn’t have to fight so much. Or homo- and trans-hostility, which also affect me, it would be great if cis and hetero people finally start fighting. It’s just that those affected always have to fight the battles, and at some point, they get old and tired, and if we all – really all of us – were to fight, it wouldn’t be so hard. And that happens very, very slowly. It happens, but it’s super rare that people realise that they could show solidarity with others. I can’t say “cool, I’m white and therefore don’t have to worry about racism”, I have to fight against racism as well. And yes, the best way to replenish resources is with some other nice things.

Yes, as far as fighting is concerned, I am generally very disappointed in society – maybe not necessarily surprised, but definitely disappointed.

Kerosin95: I think you’ll be feeling that more and more.

Kerosin95: Taking breaks is important. How best to deal with political struggles is difficult to say, anyway, it depends on what people need. At some point, I just have to distance myself or just give up, so that I can put my energy into other struggles. There are just so many idiots everywhere.

Kerosin95: They don’t even have to be complete idiots, but can also be people who haven’t really dealt with things yet. There’s a difference. Like my Dad, for example. I think he’s pretty cool. I think, if I explained everything to him – which I don’t always do because I also have other stuff to do – then he would understand it, I trust him to do that. But there are people who have done their research and are idiots because they are just trans-hostile.

Your album “Volume 1” will be out on Friday! Excited?

Kerosene95: Definitely! I’ve been so distracted by so much stuff lately and couldn’t really concentrate on it. But this week, I will surely drink a glass of sparkling wine with myself and celebrate a little. It was so much work, and among all the other stuff that’s going on it is sometimes forgotten, how much work and love and detail went into the production. And that this album is going to be published now, and that people will hear it now, that’s so crazy. As soon as this kicks in, I’ll be very happy.

I have to say that I found this album quite surprising – in terms of style. It’s different from the singles you’ve released recently, such as “Außen hart, innen flauschig”. How did this change take place?

Sound-wise, the album is completely mixed. There is poetry, 90s aesthetics, pop – sometimes there are parts that remind me of Nena, but sometimes also of Fiva. Have you now found your sound – at least for now?

Kerosin95: Yes, just as the album is not just a single sound, Kerosin is not a single sound. I think the album is really there to give a stage to every story I want to tell. And on this stage, that sound happens and that’s how it has to be told. I didn’t think to myself “awesome, let’s do a 90s pop song here and make a crazy trap hit there and it will be totally old-school”, The album just came about without a concept. And I always asked people spontaneously if they had time to work with me, like the day before, because I worked with different producers. That’s how the songs came about. So, kind of a mess. But there is still a common thread running through it. Kerosin is just this playground. In terms of sound, the common thread may not be visible, but it doesn’t have to be. At some point, I asked myself whether it should have a common thread, sound-wise, like the most brilliant Leyya album, for example – because I think that Leyya does this on such an amazing level, creating a sound that is present on the whole album, which I find beautiful – but at the same time, I realized that it doesn’t have to be. So, this thread can be somewhere else, and for me, it is more in the content, in the stories. It’s in the design, the music, the artwork, the videos, the costumes and the performance and the lyrics. The thread runs through the whole project. And that’s what makes Kerosin stand out for me.

The album reflects these super diverse, but really deep emotions, there is this anger, this self-confidence, but also sadness – all very strong emotions. My interpretation was that it represents Kerosin’s world as a whole.

Kerosin95: Yes exactly, it does. That’s what I meant with the playground before. It is simply a part of the world of Kerosin. There’s no beginning and no end, which is very handy because I can just start somewhere and never stop – or just choose where to stop. With every song that comes out, the project grows bigger and offers more possibilities, and that’s kind of nice. I don’t have to limit myself there. Well, sometimes borders in music are cool, too, so in the sense of where do I go now and where do I stop now. But with this album, it was a courageous step for me to say, I’ll try something new. So, this album is not called “metaphor for the feelings in this album” but “Volume 1” – it doesn’t matter. I didn’t care what it was called, I just wanted to say “Hey, look, I brought out a record that is called whatever, for example record number 1”.

How is the relationship between Kathrin and Kerosin? Is the project just a part of you, or is it you?

Kerosin95: I don’t want to reveal that completely. Because I don’t know exactly either. Or do I know? I don’t know! [laughs] I think people should think for themselves, that’s the funny thing about the project. There is just this persona, and it’s called Kerosin95 now, and then there’s Kathrin Kolleritsch – and what happens in between can always be everything or nothing. It can be the most beautiful thing and the most annoying one. It can be full of fun or full of exhaustion. But that changes all the time, and I don’t know either.

Nice! I had often asked myself to what extent Kerosin and Kathrin are the same person.

Kerosin95: They are definitely friends! Maybe it’s also a split personality [laughs]. I wanted to deal with myself and now I just personify that. And then that’s me after all, or not, or huh, or no idea – whatever.

After all, it’s doesn’t have to be defined.

Kerosin95: Exactly. There’s the playground metaphor again. In fact, it’s such a playground that I can somehow personify my feelings.

The playground is also mentioned in the press release text about Kerosin95 – it also says “Kerosin95 is a persona, a project and a performance”. Performance is a very loaded, ambiguous word and can be a role, an act, but always somehow presupposes a “staging”. How is that the case with you? Is there a “staging” behind Kerosin?

Kerosin95: For me, the staging is primarily about the fact that when I feel really bad and I still want to do my job – and my job is performing, after all – then I have to establish a fun atmosphere on stage – but somehow, I don’t. But with this project, it works very well. I have more fun because the songs are also very energetic. But once I felt really bad, for example, and I thought to myself “Fuck, how do I get on stage now”, and that’s where the staging comes into play, which can also turn it around really nicely. Then I put on this costume, a different make-up-style, I dress very differently and stage myself. And then I might have a really great time for an hour, and after that I might feel like shit again. But in that one hour, I did something really nice. Sometimes it can really be me. And sometimes it can be a role that saves me from a mood. And that is why this performative aspect is often something very good.

Performing is also very legitimate, I mean, basically, all of us perform all the time. However, aren’t you a little tired of being reduced to gender?

Kerosin95: Yes. Totally. People should just show me interviews where they do that with the Cis-Boys. Then we can talk about it again. But first, show me 10 interviews, in which Cis-Boys are asked the same questions. Before that, I don’t answer the questions anymore, but simply say ‘next question’.

Fair enough! Then something else: Who is Tina?

Kerosin95: Tina! [laughs] Yes, Tina – that’s the mother of a lovely friend of mine. Tina is really cool, she has such a cool voice. She is also one of the actresses in a My Ugly Clementine video. But she doesn’t speak in the video. And she’s just really cool and always on the go for things like that and she read these nice YouTube comments out loud for the intro of the album.

Ah, these are Youtube comments! I was wondering a bit …

Kerosin95: … whether Tina has anything against me? [laughs]

Yes, a little bit! I really like the comment: “Why does she have a beard?” Reminds me of the awesome video you made, the makeup tutorial on how to get a beautiful beard like yours.

Kerosin95: Yes, even if that turned out to be a bit of a bad video. Discriminatorily, I did it only for people who already have a bit of a fluff, which is a shame because there are also people who have nothing, or a lot more. I’m still a little sorry that I only showed this one way. Maybe there will be sequels.

That’d be lovely! Thanks for the interview!