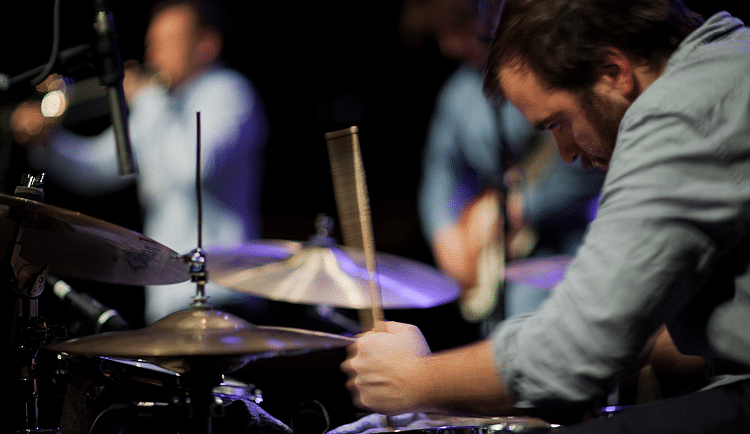 Word has spread to other European countries that the Austrian jazz scene is changing. A lot and at the highest level. The number of young musicians, bands, and ensembles who have made a name for themselves outside their home country has risen significantly in recent years. Just think of David Helbock, Mario Rom’s Interzone and Kompost 3. Austrian acts are in demand. They are invited to well-known festivals, make guest appearances in the hip jazz clubs of the continent, and are increasingly appearing on major international labels.

Kick Jazz wants to acknowledge this development. As with the first edition of the festival, six promising young bands will be given the opportunity to present themselves to the public. But not only that, Kick Jazz also wants to open the doors to the European jazz scene for the musicians. That is why, once again, international promoters, bookers, and festival operators will be invited to experience the high quality of the local scene.

The music that HI5 delivers has little to do with traditional jazz. The sound that Chris Norz, Philipp Ossanna, Matthias Legner and Clemens Rofner bring to the audience is one that sits somewhere between styles. It is composed of elements of modern jazz, 1970’s progrock, minimalist trip-hop, post-rock, chamber music, and electronics. It is a challenging mixture for musicians. One which often carries the danger of missing your musical goal. HI5 don’t do that. Their focus on a reductionist sound, one that achieves great effect through conscious restraint, allows them to develop an immense atmosphere and hit a musical bulls-eye.

A trio that has embarked on a search for the roots of the glorious jazz of the past. Lisa Hofmaninger and Judith Schwarz (both chuffDRONE) and their congenial partner on the piano, Alexander Fitzthum, delve deeply into the music of legends such as Charles Mingus and Thelonious Sphere Monk. They bow to their genius and virtuosity, but in their own unique way. This trio isn’t satisfied with a simple interpretation of the past geniuses. What they have achieved is a respectful and innovative reinterpretation. First Gig Never Happened want to highlight the timeless aspect of their heroes’ music. But they have chosen to express their passion for the past through modern methods. The band creates something new out of the old, something that gets under your skin and sounds incredibly cool.

Achieve greatest effect by focusing on the essentials. This is probably the motto of the four-man formation Klio. Verena Zeiner, Philipp Harnisch, Judith Ferstl and Mathias Koch renounce excess in their songs. They avoid any unnecessary decoration and focus instead on a certain musical simplicity. The term “simplicity” in the case of this band is relative, though. The members are four well known assets of the young local jazz scene. Musicians who have already proven their extraordinary abilities several times over in various projects and now also in their joint quartet.

This clarinet quartet refuses to limit themselves. In typical crossover style, their music allows different musical styles and structures to combine in an impulsive and yet artistically dignified manner. Classical jazz is interwoven with modern playing styles. Sometimes a pinch of chamber music makes itself known. And sometimes Oscar Antoli, Stephan Dickbauer, Daniel Moser and Leonhard Skorupa roam the fields of pop or new music. Woody Black 4 know how to transform this variety into a vibrant new whole. The result is a sound that grabs you from the very first note.

Two musicians who know how to set off musical fireworks. Atanas Dinovski and Paul Schuberth celebrate the purest form of musical freedom. Trying to shove their music into one stylistic category is futile. The two accordionists know how to move effortlessly between musical environments with elegant and masterful steps. In their pieces they act as bridge-builders with an impressive understanding of how to reconcile the most diverse and the far-flung influences. The ingredients of this duo’s exceptionally colourful and multifaceted musical mix range from jazz to folk to Balkan and even includes tango and new music. They aren’t afraid of daring improvisations, either.

A jazz band that doesn’t want to play jazz at all. The sound of Luzid Chaos is a great example of what can be achieved when talented musicians decide to break the rules. Anna Anderluh, Alexander Kranabetter, Simon Raab, Philipp Kienberger and Hubert Bründlmayer have turned their backs on convention. This Viennese quintet celebrates stylistic diversity. A diversity which makes an unambiguous categorisation impossible. The result is wonderfully varied and extremely atmospheric. A beautiful musical blossom. Minimalist meets experimental, melodious meets weird – a truly fascinating and unique sound experience.

Kick Jazz is a festival from Austrian Music Export in cooperation with Porgy & Bess.