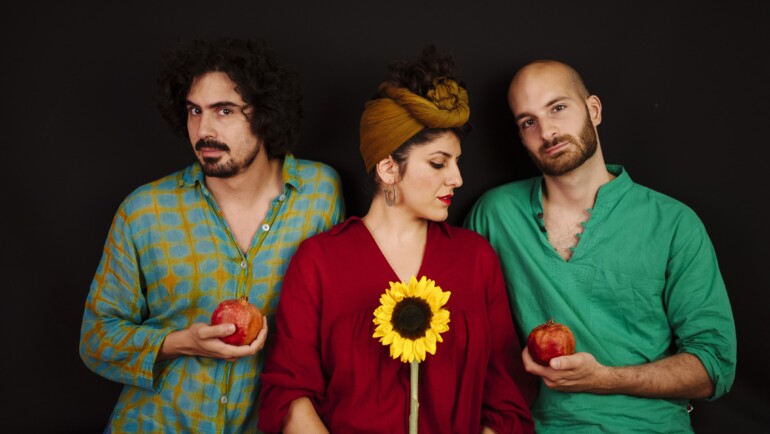 Curtains up for local jazz and world music: The KICK JAZZ 2018 festival will gather the most promising local jazz formations on the big stage of PORGY & BESS on December 4 & 5 and show what the local music scene has to offer.

After the two successful editions in previous years, the third edition is seasoned with a strong taste of world music. The first act on the opening day is the brilliant TRIO INFERNAL, followed by GOLNAR & MAHAN and the swinging ROMAN BRITSCHGI QUINTETT. On the second day of the festival, the audience will encounter the great musical cinema of the SYNESTHETIC QUARTET, the previously unheard, room-filling, sound worlds of the New Music quintet KVIN, and the classical based jazz aesthetics of the duo BARTOLOMEYBITTMANN.

On these two evenings the stage of the renowned jazz club Porgy & Bess belongs to none other than the highest level of current protagonists from a lively, diverse, and innovative Austrian jazz and world music scene. Their diverse influences ensure that local jazz remains exciting and lively.

The number of musicians making a name for themselves outside Austria is continuously rising. Austrian acts are in demand, play at renowned festivals, and give guest performances in the continent’s hottest jazz clubs.

KICK JAZZ wants to take this positive development into account and, as the name suggests, give an impulse to prove oneself in front of a larger audience – also from an international point of view. KICK JAZZ should also serve to open the gates to the European jazz stages for musicians. Therefore – as in the past year – international promoters, bookers and festival operators will be invited to get an idea of the incredible quality of the local scene.

BAND BIOGRAPHY and LINE UP

The quintet around the double bassist, composer and bandleader Roman Britschgi, who comes from Switzerland and lives in Vienna, creates a world music sound that feeds on the great variety of different styles. The ROMAN BRITSCHGI QUINTETT builds bridges between the different traditions and moves in the wide field between klezmer, jazz, classical, chamber music and light pop allusions. The music of Roman Britschgi (double bass), Melissa Coleman (cello), Andrej Prozorov (saxophone), Christian Eberle (drums) and Christian Bakanic (accordion) is carried by a wonderfully elegant vibration that does not exclude modernity.

GOLNAR & MAHAN combine the traditional sounds of their homeland, Iran, with the contemporary musical styles of the West. The music of Golnar Shahyar (vocals, guitar), Mahan Mirarab (fretless guitar, oud) and Amir Wahba (percussion) forms a universal language whose vocabulary is based on the music of the Middle East, jazz, singer-songwriting, and African rhythms which are combined by GOLNAR & MAHAN into its very own warmly pulsating sound. GOLNAR & MAHAN playfully succeeds in dressing up supposedly old sounds in shiny new clothes and filling them with a new life.

Christian Bakanic, Christian Wendt and Jörg Haberl don’t have much in common with a classical accordion trio. Instead, the three musicians see themselves as ambassadors between the sound worlds of jazz, tango and the modern grooves of the club scene such as house and drum’n’bass. TRIO INFERNAL lets the clichés blaze and sees itself not as frontiersmen, but as a bridge builders between the styles. The result is a vibrating sound, enriched with passion, virtuosity and fiery ideas.

The SYNESTHETIC QUARTET gathered around the clarinettist Vincent Pongracz artfully transcends traditional musical rules. The compositions of the bandleader, who draws his musical inspiration from modern jazz, funk and swing to soul and hip hop, are full of surprises and attention to detail. The SYNESTHETIC QUARTET is able to create great cinema with multi-layered references and driving beats. Not least because Vincent Pongracz (clarinet), Peter Rom (guitar), Manu Mayr (bass) and Andreas Lettner (drums) are excellent musicians who reveal an unbelievable joy of playing on stage. The name of the band is inspired by the French composer Olivier Messiaen, who once called himself a synesthete.

The Viennese quintet KVIN knows how to use the musically unpredictable in a suspenseful and incredibly artistic way. Philipp Kienberger (double bass), Raphael Kasprian (violin), Emily Stewart (viola), Cornelia Perwein (cello) and Tatjana Wurzer (piano) take a refreshing break from the familiar. In their pieces they make a successful attempt at a reinterpretation of the term “crossover”. Musically, the quintet travels through a broad field that begins in classical music, crosses modern and free jazz and chamber music, and after short excursions into pop music finally ends up in new music. The sound KVIN produce is highly idiosyncratic, capable of filling the room and developing its very own life.

The musical spectrum, which the two string players Matthias Bartolomey (cello) and Klemens Bittmann (violin, viola, mandola) cover in their pieces, ranges from classically oriented chamber music to various jazz interjections to variations of rock and pop. The two musicians are united by their love and respect for the sound of their instruments as well as the desire to jointly develop the new sound images possible with them. Their compositions oscillate between powerful high-speed riffs, spontaneous improvisations, playful wit and dreamy, minimalistic and very sensitive passages.