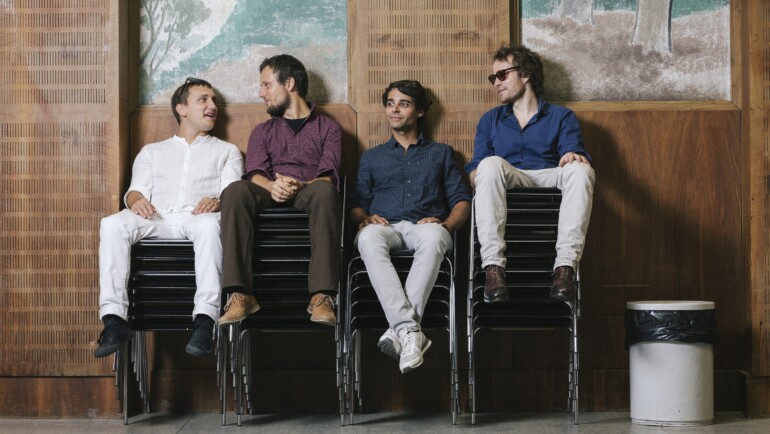 Curtains up for Austria´s local jazz scene: After three successful editions in previous years the KICK JAZZ 2019 festival will gather the most promising local jazz formations on the main stage of PORGY & BESS on December 9 & 10 and show what the local music scene has to offer.

The opening act on the first day of KICK JAZZ 2019 is the experimental SKETCHBOOK QUARTET, followed by a solo of the cellist SOPHIE ABRAHAM. Later in the evening the talented Styrian duo TUBONIKA will enter the stage. On the second day of the festival, the versatile duo SAIN MUS, the Viennese four-man formation PURPLE IS THE COLOR, and Maja Osojnik & Matija Schellander with their project RDEČA RAKETA are on programme.

On the two days during Kick Jazz, the stage of the renowned jazz club Porgy & Bess belongs to nobody else than the highest level of current protagonists from a lively, diverse, and innovative Austrian jazz scene. Their diverse influences ensure that local jazz remains exciting and lively. The number of musicians making a name for themselves outside Austria is continuously rising. Austrian acts are in demand, play at renowned festivals, and give guest performances in the hottest jazz clubs of Europe.

KICK JAZZ wants to take this positive development into account and, as the name suggests, give an impulse to prove oneself in front of a larger audience – also from an international point of view. KICK JAZZ should also serve to open the gates to the European jazz stages for musicians. Therefore – as in the past year – international promoters, bookers and festival operators will be invited to get an idea of the incredible quality of the local scene.

BAND BIOGRAPHY AND LINE UP

Listening to the tracks of Sketchbook Quartet, there is definitely an initial moment of surprise. The music of the experimental Viennese quartet has little to do with jazz in the classical or traditional sense. Not only is the lineup of Sketchbook Quartet rather unorthodox, but the music and sound of Leonhard Skorupa (saxophone, clarinet), Daniel Moser (bass clarinet), Andi Tausch (guitar) and Konstantin Kräutler (drums) is also quite unusual, even idiosyncratic for the genre. The quartet approaches jazz from a completely different direction, which – in its broadest sense – can be attributed to post-rock. The music is all about mood and atmosphere, creating tension that is constantly increased, until it finally reaches its climax with a big bang. Marked by an abundance of warmth and beauty, the quartet hits a captivating tone of jazz that invites the listener to immerse himself in the music and to enjoy the event.

In her first solo cello programme Sophie Abraham combines elements from classical pieces with her own compositions. Musically she expands the sound space of the cello with her voice, her languages (Dutch, German, English), with loops, montages and overlays. The result is a highly interesting, sophisticated, extremely complex and very independent sound space in which the expressive possibilities of the cello are expanded. The musical openness of the cellist and her love of diversity are the basis for a programme that is characterized by strictly composed pieces and a strong tendency towards spontaneous improvisation.

A young talented duo with the successful approach to redefine traditional folk music and in doing so, igniting a musical firework. The Styrian duo Tubonika is on a quest to create something out of the ordinary, bringing together the old and the new. Breaking with tradition, the three young musicians Jonny Kölbl (harmonica), Markus Krofitsch (trumpet) and Tobias Weiß (tuba) are bringing back old traditional folk music into the present, while mixing it with elements from other musical forms and styles. The pieces of Tubonika include sounds from jazz, classical music, world music and even pop. An unusual musical mix that captivates the listener from the very first second

Sain Mus – a duo that has dedicated itself to creating idiosyncratic soundscapes, while exploring its instrumental possibilities in a gripping and soulful manner. Philipp Erasmus (guitar, electronics) and Clemens Sainitzer (cello, electronics) – the two heads behind this duo project – refuse to confine themselves to any musical standards and rather focus on producing exciting new sounds from supposed opposites. The two musicians are masters in creating both beautifully elegant and dreamy lyrical music, as well as wildly dissonant, high-energy, dramatic and more progressive sounds. The duo also does not shy away from the free form of play. Celebrating the vast spectrum of musical diversity, the pieces of the duo range from chamber music to modern acoustic songwriting, rock, blues, folk and jazz. Definitely top of the line.

Rdeča Raketa is characterized by a high degree of individuality which is dedicated above all to the artful examination of the phenomenon of sound. What is presented by the duo appears like a machine that has become a pulsating sound structure, constantly busy with itself in the context of electro-acoustics, creating sound collages shimmering in threatening and gloomy colours. Questions about any stylistic positioning into a certain musical category are basically obsolete, since the Viennese duo defines itself within a tonal space in which traditional or any other notions are no longer really effective. Rdeča Raketa create a cinematic sound painting one simply has to deal with.

Purple is the Color

Jazz music of a tremendously elegant quality, the kind that does not linger in the classical realm, but rather unfolds many interesting interconnections to other styles. Purple is the Color understands how to build bridges and translate various elements into its own sophisticated musical language. The aim of Simon Raab (piano), Stepán Flagar (saxophone), Martin Kocián (bass) and Michal Wierzgon (drums) is to touch the audience with their music, release deep-rooted feelings and trigger emotions. It is beautiful melodies and harmonies that create a continuous arc of suspense, passionate and playful passages that consistently open the space for experimental and weird sounds, calm sounds that gently caress the listeners, inviting them to dream and so on. Purple is the Color hit the exact tones that flood the soul and persuade listeners to completely indulge in a musical spectacle.