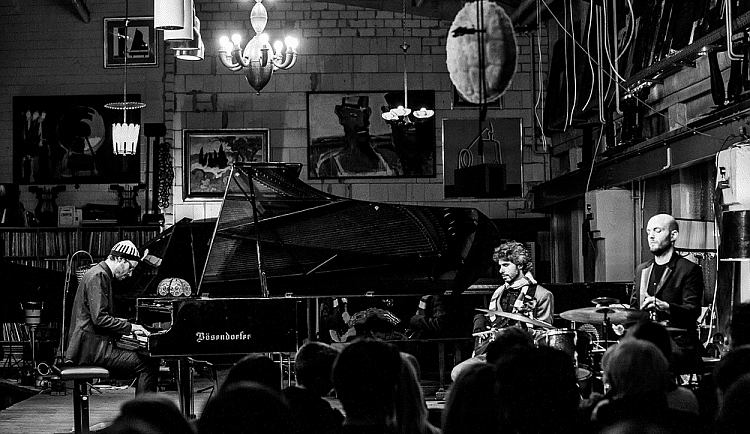 December 2016 will see the premier of the KICK JAZZ festival in Porgy & Bess in Vienna. Focusing on the young Austrian jazz generation, the event will present six of the most sought after and successful bands of the Austrian jazz scene.

Things are happening in Austrian Jazz. A lot of things. A good portion of those things are happening thanks to musicians of the youngest generation who have long stepped out of the shadows and and into the spotlight. Musicians who have grown out of the insider tip phase of their careers. They have not only maked names for themselves, but also brought an incredible level of musical variety and quality to the local scene. And now that scene has become very self confident and set their sights on the international stage. And thanks to their reputation for being incredibly creative, talented, multifaceted and lively performers, it isn’t too surprising that they have achieved that goal with international awards and invitations to some of the most important festivals abroad.

The current sound of Austrian jazz is defined by its wide variety of musical languages and sounds. It’s that variety that makes the scene so exciting and interesting. One never knows just what one might hear, just that it is going to be good. The musicians and their various projects set different accents, follow different directions and freely mix styles and sounds. It is almost as if the listener is being taken on a musical journey whose destination is first revealed upon arrival.

The six acts performing at KICK JAZZ are the very embodiment of this development. Not just the embodiment, but together with many other musicians from around Austria they have been the very architects of this change. They helped design it and move it forward and continue to do so now. These six bands represent the unbelievable musical diversity openness and experimental approach that has become the norm in Austria now. The two concert days are a perfect opportunity for the international promoters and festival agencies who have been invited to get a good look at the current state of the local jazz scene. A thrilling musical experience is guaranteed.

David Helbock and his trio aim to create a reduced and as he claims “uncomplicated” jazz. But “uncomplicated” isn’t a description of their playing technique. It is the resulting sound. The compositions are well thought with a love of detail but still manage to sound reductionist when heard as a whole. The David Helbock Trio create an eventful and atmospheric sound theatre that builds multiple bridges: between traditional and modern, from one musical style to others, and from composition to improvisation.

The musicians of chuffDRONE aren’t really fans of the idea of following musical dogmas. They don’t feel bound to the traditional rules of jazz, preferring instead to set their own musical accents. The reckless improvisations, unconventional solos, varied arrangements, groovy rhythms are all playfully brought together and woven into a brand new whole. A sound of jazz combined with elements from other styles but avoids being over thought or unnecessarily complex while still being musically challenging.

You can forget about trying to fit the music this quartet creates into any one musical style. There is just too much happening in the music they make. They have found themselves a comfortable spot somewhere between jazz, funk, hip-hop, soul, electronic, and (post)rock. Martin Eberle and his colleagues have mastered the art of taking these diverse styles and making a wholly new and unified sound out of them.

Edi Nulz consists of three jazz musicians that unmistakably bring along a heavy dose of rock music. The music of Julian Adam Pajzs, Valentin Schuster and Siegmar Brecher is far from any classical jazz structures. Besides the strong instrumental skills and the highly complex songs of the musicians, it is above all the driving energy in the playing style, melodies, harmonies and riffs that sets the music of this trio apart from traditional jazz, and is rather reminiscent of the prog-rock era in the 70s.

Mario Rom’s INTERZONE is a band that has made an international name for themselves thanks to a reputation for first rate releases (“Nothing is True”, “Everything is Permitted”) and strong live performances. With Lukas Kranzlbinder on Bass und Herbert Pirker on drums, the trio around trumpet player Mario Rom belongs to those groups of contemporary musicians who approach jazz in their own unique way. The result is a free-form mix of traditional and modern jazz with elements of bebop, funk and swing thrown in for good measure. The sound is varied and layered, and the fun-factor enormous.

There are some bands that seem to fight tooth and nail against any form of musical categorisation. In 2003 three young instrumentalists came together with a plan to revolutionise the concept of the classic trio format (saxophone, bass and drums) and add a fresh instrumental twist to the sound. As in their previous project [midshi], the trio followed a path blazed by various music forms that ranged from the margins of classical jazz interpretations to more electronically tinged and experimental avant-gardistic sounds. The approach of Namby Pamby Boy is quite similar, with the difference that the three musicians now not only take inspiration from electronic music, but also from the fields of rock, funk and hip-hop.