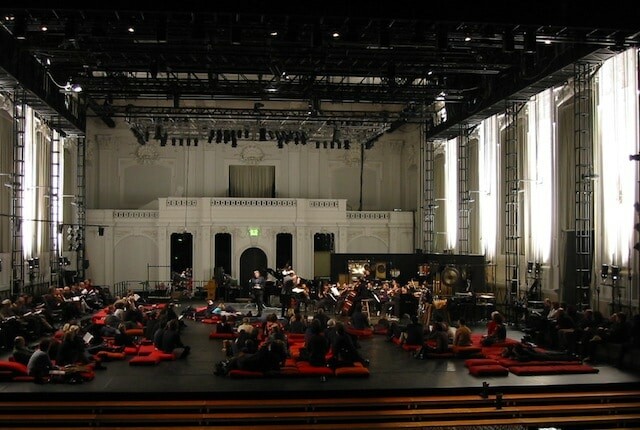 Symposion. An Intoxication in Eight Divisions: Slowly and gracefully the ancients in antiquity got drunk. Klangforum Wien first premiered with Symposium in 2001 which is still present on international programmes. The basic idea of the Symposia was that wine, a gift of the gods, would grant human beings access to the numinous, even to the gods themselves, and to truth – if consumed in the right manner.

Klangforum Wien followed in the footsteps of the Athenian wise men of the 6th century B.C. for the first time in May 2001. The experience with this ancient social practice has continued to work beautifully ever since, in performances in Vienna, Venice, Salzburg, Dresden, Budapest, Bolzano, Donaueschingen, Margreid and Luxembourg. A well-tempered atmosphere is the basis for a shared and intense aural offering throughout this eight-hour concert. So far no guest has left before the end!

Music of our times, perceived in the slowly changing conditions of collective, relaxed inebriation… Pillows, futons and comfortable seats create an installation that is willingly inhabited by the audiences. During the long intervals they are wined and dined. Slowly and by degrees, different stages of intoxication are reached – a change from the Apollinian to the Dionysian world, whose frontiers become blurred and finally disappear altogether in the course of the night.

Symposion. An Intoxication in Eight Divisions is coproduced by netzzeit and Klangforum Wien.

Klangforum Wien – a force to improve the world

24 musicians from ten different countries represent an artistic idea and a personal approach that aims to restore to their art something that seems to have been lost – gradually, almost inadvertently – during the course of the 20th century, which gives their music a place in the present and in the midst of the community for which it was written and for whom it is crying out to be heard. Ever since its first concert, which the ensemble played under its erstwhile name “Societé de l’Art Acoustique” under the baton of its founder Beat Furrer at the Palais Liechtenstein, Klangforum Wien has written musical history. The ensemble has premiered roughly 500 new pieces by composers from three continents, giving a voice to the notes for the first time. It could – if given to introspection – look back on a discography of over 70 CDs, a series of honours and prizes and around 2000 appearances in the premier concert houses and opera venues in Europe, the Americas and Japan, for renowned festivals as well as youthful and idealistic initiatives.

netzzeit – a tool to produce musical theatre in its broadest sense

netzzeit is led by the artistic directors Nora and Michael Scheidl. It is a non – profit association, which is supported by the department for cultural affairs of the city of Vienna since 27 years, equipped with the comission to produce theatre, which is not taking place in the conventional area of the art, whatever the reasons for this may be.