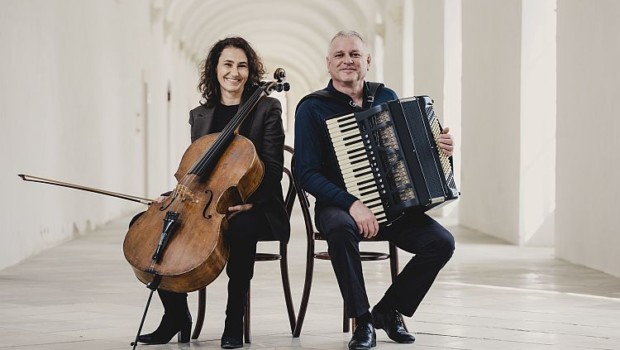 For a decade now the accordionist KLAUS PAIER from Carinthia and the cellist ASJA VALCIC from Zagreb have come together to perform outstanding music. Their tenth anniversary brings about the release of their new album “Vision for TWO – 10 Years” (ACT).

The album for this milestone anniversary represents a kind of inventory of the duo’s previous work as one can find on it all the exciting and extraordinary music for which it is so much appreciated. At the same time “Vision for Two” also offers a lot of new stuff which is not really surprising. Klaus Paier and Asja Valcic have never repeated themselves on their previous album, on the contrary they have always managed to reinvent themselves and their sound and to enlarge and enrich their music with extraordinary new facets.

The new pieces reveal themselves once again as a varied journey through most diverse sound worlds. The duo cultivates stylistic openness and does not stop at any boundaries between genres. Jazz makes its way in a complex way towards classical and chamber music, at one point the elegance of the tango can be heard, at another a bridge is built to the musette or other world-music forms. The art that the accordionist and the cellist are fully mastering, is to create an immensely atmospheric overall picture from these many influences. One that inevitably captivates you, whether with soft tones or playful dancing rhythms.

Klaus Paier and Asja Valcic show on “Visions For Two” that musically speaking they are far from having reached the end of their creative journey and that one can expect from them many great things in the future as well.