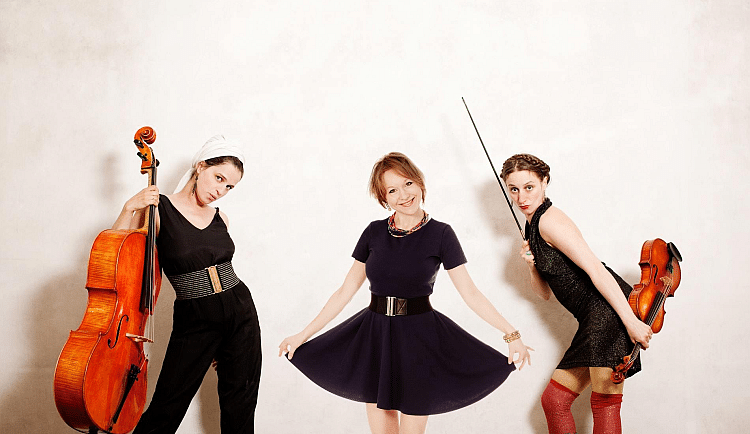 “Bringing Alpine folk music into the new century.”- That’s the motto the two Styrian musicians MARIE-THERES HÄRTEL and DEELINDE adopted a couple of years ago with the formation of  NETNAKISUM. It raised a few eyebrows. And not just in Austria. With KUSIMANTEN they have now joined together with the Ukrainian singer TAMARA LUKASHEVA and released a new album “Bleib ein Mensch” to showcase their latest project.

Whereas Marie-Theres Härtel (Viola) and deeLinde (Cello) dedicated Netnakisum to the artistic renovation of Austrian folk music, together with the singer Tamara Lukasheva they have now made a significant change of direction.  With the Kusimanten they have considerably expanded their musical offerings. Sounds of typical folk music are now only apparent as trace elements in the music of the Austro-Ukrainian trio.

OFF TO A STYLISTICALL DIVERSE SOUND

The musical happenings on “Bleib ein Mensch” take place on a very open plain. The pieces are like an eventful trip through diverse acoustic environments. From classic into chamber music, from jazz to various folklore, from the musical tradition of western Europe to eastern. Here and there a little funk and pop can be heard. It is a refreshingly wild mix that manages to avoid every simple categorisation in a very wonderful way.

But it isn’t just the musical diversity that sets the tone and makes the work an experience. The unconventional use of their instruments goes well beyond any conventional performance. The Kusimanten are experimental and free form, they improvise luxuriously and give the resulting sounds freedom to roam. On top of that comes the varied voice of Tamara Lukasheva who, wether solo or together with her colleagues, gives every song a very individual, distinctive note.

The result of this diversity is an incredibly layered and lively sound that is expressed in varied emotional colours, shades and intensities. On one song laid back and groovy, only to switch to dignified musical elegance. In between the trio from mysterious and exotic to movingly melancholic.

“Blein ein Mensch” is a work that stands out because of its musical vagueness. Marie-Theres Härtel, deeLinde and Tamara Lukasheva have created a musical language with their songs that has rarely been heard before. The sound of the Kusimanten is refreshingly new. A sound that invites the listener to listen very carefully.